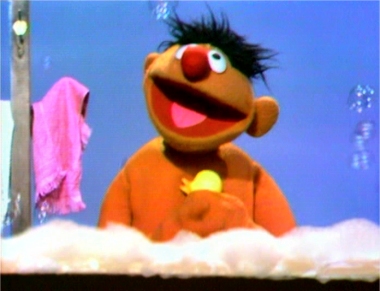 NOTE: This review is brought to you by the letters B, G and A, and the numbers 1 and 7.

Though it may not be the longest-running television show in history, it's safe to say that Sesame Street is the proverbial 800-pound gorilla of Amercian children's programming. Beginning in 1969, this popular series combined educational animation with humorous live-action skits, catchy songs and plenty of laughs. What really set it apart from other kids' shows was the combination of human characters with Jim Henson's Muppets; additionally, both species were represented by characters of various ages, sizes and colors. Produced by the Children's Television Workshop (or "CTW" for short, though it's now known as "Sesame Workshop"), Sesame Street started strong and kept the ball rolling: after more than 35 seasons, 4,000 episodes and 100 Emmy Awards, it doesn't look to be closing its doors anytime soon.

Of course, a lot has changed over the years. Human characters have grown old and passed away, new friends have been introduced---and of course, the overall style has changed. Today's version of Sesame Street is obviously more contemporary, though it's a bit too Elmo-centric for its own good. Still, the spirit remains the same: kids of all ages enjoy it, and they learn just as much as they laugh. Many of those with fond memories of the show's first years have grown up to raise children of their own; for those families, any decade of Sesame Street should provide plenty of quality entertainment. I grew up watching it during the early 1980s, just before Mr. Hooper passed away and right after the original airing of the classic Christmas Eve on Sesame Street (which I still admit to watching annually). In other words, I'm not alone in saying I have fond memories of Big Bird, Ernie, Bert, Bob, Oscar, Gordon and everyone in-between.

Sesame Street: Old School, Volume 1 (1969-1974), a new three-disc set from Sony, is tailor-made for those who eagerly devoured the show right from the start. Those who wouldn't be in existence for another decade or so (like me) will notice a few noticeable differences right away---though as with modern years, the spirit remains the same. Oscar was yellow instead of green, Big Bird had a pointy head and his buddy Aloysius Snuffleupagus had scary green eyes. Several long-running human characters hadn't joined the team yet, though Bob, Susan, Mr. Hooper and Gordon were on board…or the first of three different cast members that played Gordon, at least. Still, the entertaining blend of animation, music and live-action skits---considered experimental at the time, actually---remains the same, and that's the heart and soul of Sesame Street. For most viewers, it'll feel just like going home. 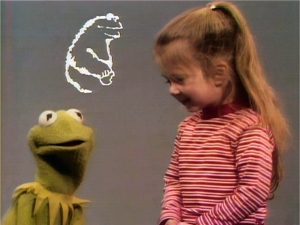 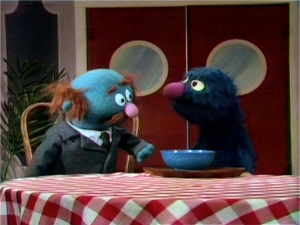 The format of this three-disc set is simple: it presents the premiere installments of the first five seasons---Episodes #1, 131, 276, 406 and 536, for those keeping score---while carefully herding a selection of other classic season moments as bonus features. Any collector on a reasonable budget can agree that complete season sets of Sesame Street just couldn't happen---and since commercial VCRs weren't around in the early 1970s, it's possible that everything else will be held back in the archives for now. The inclusion of each season premiere is a logical choice, as it often provides viewers with a clear overview of what's new in the neighborhood. Along the way, you'll meet Wanda the Witch, see Jim Henson juggle, witness Kermit wrestling the letter "W", recite the alphabet with Bill Cosby, play "What's My Part?" with Guy Smiley, eat at Grover's Restaurant, see The Great Cookie Thief in action, sing along with "People In Your Neighborhood", do "The Pigeon" with Bert and much, much more.

It's certainly worth noting that a small amount of content and music from an episode or two has been removed from the original broadcast versions, apparently due to rights issues. I can't take credit for the sharp eye, though, as these minor cuts have been listed in a review over at Muppet Central. It's unfortunate that a few episodes can't be considered 100% identical to the originals, but it's a minor miracle that so much has been left intact (including the many Kermit scenes, which didn't fare so well on the DVD re-release of Emmett Otter's Jug-Band Christmas). We can only hope that future volumes of Sesame Street on DVD will preserve as much of the content as this first collection has.

Though the audio/video quality of this collection is limited to the original source material, there's no doubt fans of the series will enjoy what's presented on Old School: Volume 1…all seven hours of it! As Sesame Street makes its way around the globe---which includes roughly 30 locally-produced versions of the show in various countries, with more to come---it's exciting to see the show's modest, intimate roots. Let's take a closer look, shall we?

Presented in their original 1.33:1 format, it's no surprise that most of this content looks a little worn around the edges. These episodes look to have been taken from tape masters; as such, they're fairly soft and the colors are slightly uneven. Additionally, these discs don't seem to have been progressively encoded, causing mild blurring during scenes of action. Though I doubt the majority of this material could've looked much better, a bit of fine tuning certainly wouldn't have hurt.

The audio presentation offers a slight improvement, as these vintage episodes are presented in their original mono mixes. Dialogue and music comes through clean and clear, free of hiss, distortion and other such problems. Unfortunately, English subtitles and Closed Captioning features have not been provided on these discs. While neither the video or audio presentations can be considered "excellent", they're still quite watchable and shouldn't disappoint fans of the show. 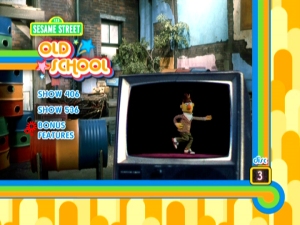 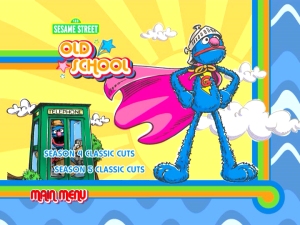 The fun, animated menu designs for Sesame Street: Old School are a perfect complement, offering a simple layout and smooth navigation. Each 60-minute episode is presented with several chapter stops (or "highlights", as the menu calls them), though a few more per episode would've helped. This three-disc set is housed in a handsome foldout digipak case, combining retro-style drawings with photo collages from the set. Also tucked inside is an excellent 24-page booklet (including an 8-page activity insert) complete with fun facts and notes from members of the cast and crew.

Bonus Features
Spread out over all three discs, only a small fraction of the bonus material could actually be considered as such…but it's hard to complain. Leading off Disc 1 is the original 1969 Sales Pitch Reel for the series (25:52, below left), introduced by CTW co-founder Joan Ganz Cooney and "hosted" by Kermit, Rowlf and CTW chairman Jerry Lesser. This amusing pitch for the as-yet unaired Sesame Street is a real treat to see; it's a bit rough around the edges, but still shows the talent and passion of the creative team. I could've sworn I even saw a gray Grover, unless that's the due to the video quality.

The remainder of the first disc includes Classic Cuts from Season 1 (13 clips, 25:01 total), including the memorable "It's Not Easy Bein' Green" and "Rubber Ducky", "Counting with James Earl Jones" (below right), "ABC-DEF-GHI", the classic "I Love Trash", "The Alphabet with Jackie Robinson", the animated short "Batman Crosses the Street", "Swinging Gibbon", "Big Bird Meets Little Bird", "The Alphabet with Lou Rawls", "I've Got Two", "Alphabet Soup" and the Season 1 Credit Crawl. Also included is a brief Still Gallery, tucked away Easter Egg-style under the bonus features menu (happy hunting!). For better or worse, all of the bonus clips are presented in roughly the same quality as the regular shows---and if you're looking for more of the same, Discs 2 and 3 should be right up your alley. 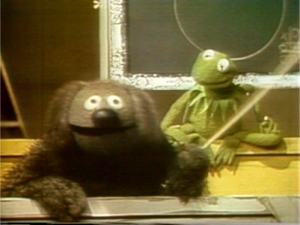 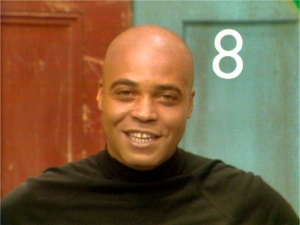 The second disc includes Classic Cuts from Seasons 2 (7 clips, 12:36 total) and 3 (16 clips, 24:58 total), as the former includes "King of Eight", "Over, Under, Around & Through", the animated "S – Superman", "Astronaut Drawing", "Listen, My Brother: Counting", the amusing live-action "I Love Being a Pig" and the Season 2 Credit Crawl. The next season's clips include the popular favorites "C is for Cookie" (below left) and "Ladybug Picnic", "Martians' Telephone", "Mumford's Magic Trick", "Alligator King", "J Friends", "A Special Day with Bert and Ernie", the rousing "I Am Somebody" (featuring Jesse Jackson!), "Would You Like to Buy an O?", "Harvey Kneeslapper with Mirror", "Breathing Song with Animals", "I in the Sky", "My Favorite Letter: P", "My Martian Beauty", "Mad Painter" and the Season 3 Credit Crawl.

While a few additional bonus clips would've been more than welcome, there's certainly a satisfying amount of content included in this three-disc set. The only real disappointment is a complete lack of retrospective material; while many original cast and crew members have passed away in the last 35+ years, several are still on board. Their thoughts---whether in the form of an audio commentary, interview or otherwise---would've made an excellent addition to this already-great collection, especially as the Sesame Street juggernaut gradually covers the globe. 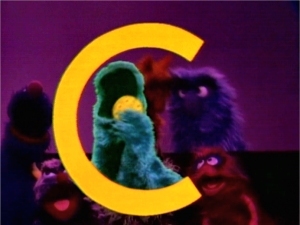 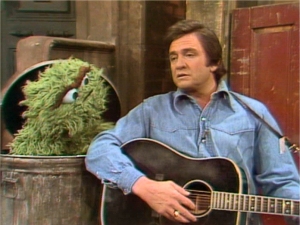 With over 4,000 episodes and 36 seasons under its belt, there's no doubt that Sesame Street is classic family programming enjoyed by millions of "viewers like you". These first five seasons aired a few years before my time, but the absolute brilliance of the creative team is on display from start to finish---and for nostalgia's sake, it simply can't be beat. Sony's DVD presentation of Old School, Volume 1 is a satisfying three-disc collection, boasting an adequate technical presentation and a few hours' worth of classic moments and other extras. A lack of retrospective material keeps this from being a truly well-rounded set, but fans of classic Sesame Street (and their kids) should certainly enjoy what's included here. An absolute must-buy for fans of quality family programming, Sesame Street: Old School, Volume 1 (1969-1974) easily comes Highly Recommended for children of all ages. Enjoy it!