Universal // R // October 24, 2006 // Region 0
List Price: $29.98 [Buy now and save at Amazon]
Review by Daniel Hirshleifer | posted November 4, 2006 | E-mail the Author
The Movie:
So, get this. Terry Gilliam is one of my favorite filmmakers. His work is distinctive, unique, and always full of his oddball humor. And 12 Monkeys was the first Terry Gilliam film I ever saw outside of his work with Monty Python. So, in many ways, 12 Monkeys is responsible for my love affair with Gilliam's work. And it's a good thing I started with this one, because aside from Brazil, 12 Monkeys is Gilliam's most representative work. 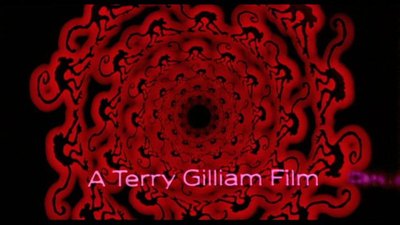 The year is 2035 and humanity has been hunted to the edge of extinction by a deadly virus. Those humans who have survived have been forced underground. The film opens on James Cole (Bruce Willis), imprisoned underground for antisocial behavior. A parole board offers him a chance for freedom after a scouting expedition offers a clue that could make the world above ground habitable again. All Cole has to do is stop the virus from ever being released by...going back in time. Cole agrees and is sent back to 1990, where he is immediately placed in a mental institution and meets Dr. Kathryn Railly (Madeline Stowe), who is fascinated by his apocalyptic ramblings. He also meets fellow inmate Jeffrey Goines (Brad Pitt), and the two become something like pals. One night, after being restrained from head to toe in the institution, Cole disappears, and ends up back in the future. Cole gives his report, and then volunteers to go back again, this time to 1996, closer to when the outbreak of the virus occurs. When Cole gets there, he proceeds to find the people he knew in 1990, only to discover that a lot can change in 6 years.

Loosely based on the film La Jetee by Chris Marker, the look of 12 Monkeys is unendingly interesting. Advanced technology combines with archaic artifacts from all over the 19th and 20th centuries to create a visual amalgamation that is a joy to pick apart. Further enhancing the bizarre aspects of this future dystopia are Gilliam's trademark camera angles, which distort the images in subtle but effective ways. The future is so convincingly realized that it looks utterly real.

But one of the great aspects of the film is the question of what, exactly, is reality? A good portion of the film takes place in a mental institution. This leaves a big question hanging over the film as to whether or not the events outside the institution actually happen, or whether or not Cole is tied to a bed the whole time, hallucinating a scenario where he is the hero.

And even you take the plot at face value, the film's time traveling plot leaves more than enough questions for the audience to ponder for weeks after the film ends. It invites repeat viewings and multiple interpretations, like the best films should. 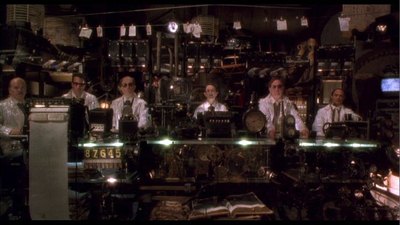 In every way, 12 Monkeys is a fully realized work of art and stands as not just one of Terry Gilliam's best film, but as one of the best films of the 1990's.

The Image:
Let's get this out of the way right now: 12 Monkeys is not your typical Hollywood picture, in content or in composition. The film is very grainy and intentionally soft, with muted colors. This transfer reflects that in every way. Every grain of film is there, the softness, the muted colors, all of it. What the HD DVD has that the previous DVD versions don't is detail, detail, detail. Lines on people s faces, stitches, facial scars, even brush strokes on paintings are all crystal clear. Every single little archaic mechanism in the future is completely visible, as is the silhouette of that hamster in its wheel. There is absolutely no artifacting to be found, and this is the best I've seen the movie look outside of a movie theater. Might it look better with a little sprucing up? Probably. But what we get here is easily a quantum leap over the picture quality of the DVD versions.

Note: The screenshots in this review were obtained from the 1998 Collector's Edition DVD and do not represent the image quality of the HD DVD. 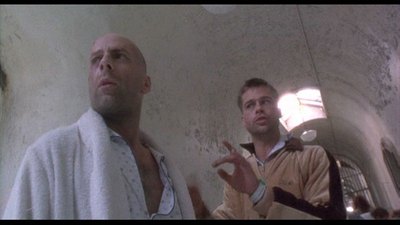 The Audio:
The audio, on the other hand, could use some work. The voices sound tinny and faraway, and the overall track just lacks power. This is the same Dolby Digital mix as was found on the past two special editions on regular DVD, and I'd say it's time for a remix. Annoyingly, the DTS track from the DTS-only DVD has been dropped on the HD DVD. Also present in a French 5.1 track and an English 2.0 track. 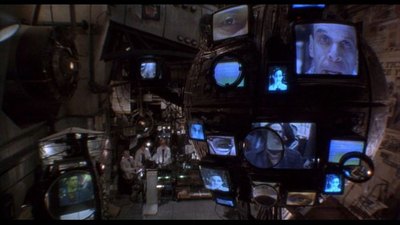 First we have a feature commentary with director Terry Gilliam and producer Charles Roven. Any Gilliam commentary is a cause for celebration, as he's always full of hilarious stories and observations. His cadence makes for an easy listen, and Roven plays off him wonderfully. Still one of the best audio commentaries around.

The highlight of the disc is a feature-length documentary by Keith Fulton and Louis Pepe, "The Hamster Factor and Other Tales of 12 Monkeys." This is one of the best behind-the-scenes documentaries ever made. Early in the film, we see Gilliam signing the paperwork that will allow Fulton and Pepe unfettered access to every aspect of the production, and he says he's doing it so they can document the film when everything starts to go wrong. Gilliam's films have often had troubled production histories, and "Hamster Factor" was his attempt at making sure the world would know what actually happened in case the film turned into another Brazil. The film centers around Gilliam and his style of filmmaking. None of it is the standard interview with cast and crew members where they praise Gilliam for being just the best director they ever did work with. Most of it is Gilliam himself, showing his insecurities, his perfectionist tendencies, and his unique world view, which spills into his filmmaking. The documentary stretches from pre-production through production, editing, test screenings, and the eventual release of the film. It is rare to find a behind-the-scenes look that is as revealing and unpretentious as this one, and the fact that we get it on the same disc as the main feature makes it one of the best special features ever.

The other big feature is the "12 Monkeys Archive," a collection of pre-production sketches from the film. While these are inarguably interesting, the method of display leaves a lot to be desired. The pictures are projected against a red background with little to no explanation of what they are, and you manually click to see the next one. Considering that this was one of the first major DVDs, this isn't exactly surprising, but 8 years later, you think they could have made it look a little more professional. Rounding out the disc is the theatrical trailer. 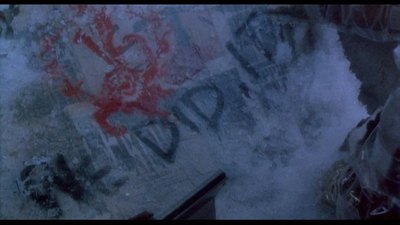 The Conclusion:
12 Monkeys is a unique, bizarre, thought-provoking film that displays director Terry Gilliam at the top of his talents. It's an unforgettable ride, and this HD DVD release is the best it's looked to date outside of a movie theater. While the audio could use a little help, the feature commentary and making-of documentary make this disc a must-own. Highly Recommended.