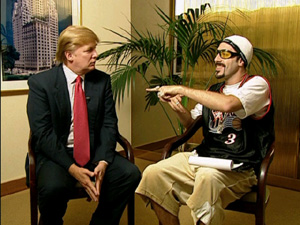 Before Borat became a national sensation in the movie Borat: Cultural Learnings of America for Make Benefit Glorious Nation of Kazakhstan, comedic prankster Sacha Baron Cohen honed his skills on two seasons of HBO's Da Ali G Show (and before that, multiple programs on the BBC that, surprisingly, no one has seen fit to import yet). Da Ali G Show's thrust was similar to Borat in that the series was made up of Cohen traveling America in various guises and ambushing situations and people in order to draw out real reactions that were both offensive and hilarious. The main difference is format: on Da Ali G show, Cohen plays three different characters, and while each episode has a theme, there is no narrative to tie them together.

Cohen's main identity is Ali G, the ridiculously stupid host of a British educational program of some kind. Ali G is what Cohen calls a "wanksta," a regular kid who has adopted a hiphop look and manner in order to seem cooler than he really is. Of course, Ali G takes this to the extreme, getting decked out in bright yellow jumpsuits and speaking in a nonstop barrage of mispronounced slang. These segments have three different varieties: the one-on-one interview with experts, celebrities, and politicians; group discussions with a panel of four people from various sides of a given subject; and field work, where Ali G goes to an actual place, like a police academy or a literary agency, to get training or advice. Each sketch pushes the patience of the chosen subject, as Ali G is an absolute moron. If there is something for him to get wrong--from the name of his interviewee all the way down to revealing incriminating facts about himself--Ali G will get it wrong. The humor comes out of how people deal with him.

The intention behind the Ali G segments is to expose the pomposity of authority, as well as peer into the chasm between generations. Just as shocking as some of the things interview subjects might say to Ali G (such as Boutros Boutros-Ghali almost admitting there might be a language spoken at the United Nations that makes him laugh because of how silly it sounds) is the idea that they are willing to accept that such an outrageous person might really exist. The bigger the blowhard, the worse they sputter out (Ralph Nader, a dismissive Donald Trump), but the true treasures are the ones who attempt to school the misguided TV personality (James Lipton, Andy Rooney). In season 2, episode 2, when Ali G pushes a veterinarian to the point of exasperation with his inability to understand the difference between a veterinarian and a veteran--further complicated by the fact that his guest is both!--the antics get almost too raw. The man gets so angry, you think he's going to pop a vein--but that's always been Cohen's stock in trade: pushing his comedy right up to the edge.

Similar results are inspired in the Borat sketches. Like in the film, the Kazakhstani reporter is touring the States to learn cultural lessons for his homeland. He goes to different places to learn about our lifestyle, including a wine tasting event with southern gentleman, an etiquette lesson, and going to a shooting range. In these segments, the target is the common man and his hidden prejudices. Borat sees how far he can stretch political correctness, just what will people say or agree with in order to indulge a misogynist, homophobic, anti-Semitic foreigner. Season 2's third episode has what may be the most infamous instance of this. When Borat sets out to learn how to write country music, he ends up performing at a honky tonk bar, emphasis on honky. By the end of his act, he has the entire audience singing along to a song with the refrain of "Throw the Jew down the well."

The final character is Austrian fashion correspondent Brüno. Though he's the only character not featured on every episode of the show, Brüno might be my favorite. In the first season, he shoots the proverbial fish in a barrel by showing up to fashion events and interviewing vacuous people. When a fashion designer is presenting a line of clothes based around the concept of "trailer trash," the material pretty much writes itself, and before "celebrity hairstylist" Jonathan Antin went on to have his own reality show and do an excellent job of proving he was an idiot all on his own (Bravo's "Blow Out"), Brüno got him to admit that mustaches indicate evil people (Hitler, Stalin, Saddam Hussein) and long-haired hippies are good (Jesus). 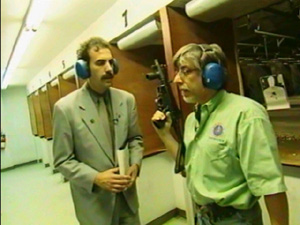 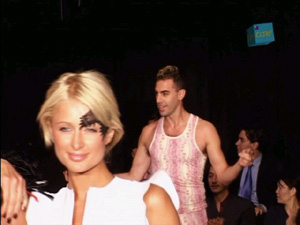 It's in the second season that Brüno really comes into his own, however. He still handles fashion, like when he sends up the various shows that critique celebrity fashions and gets his guest designers to change their opinions about various outfits based on what the producers allegedly want. Where Cohen switches up the act is by sending the flamboyant Brüno on assignments where he will come face to face with and challenge homophobia. In episode 1, for instance, he sits down with a pastor who "converts" homosexuals to the straight world, and with a serious face asks him where the line is drawn between showering with another man as Christian fellowship and showering as a gay experience. Is it when you have his penis in your mouth? Later in the season, in what is probably my favorite segment, he goes to Spring Break and gets a bunch of college guys to take off their shirts, pose, and wrestle. When the punchline comes, you'll be amazed Cohen gets away without suffering physical violence.

Essentially, if you enjoyed what Sacha Baron Cohen did in the Borat movie, you're going to get lots of laughs out of Da Ali G show, as well. The ideas are rougher, as is the production (though there is a noticeable leap from season 1 to season 2), but the comedy still delivers. Da Compleet Seereez box is the first time you can get both seasons in one package. They are essentially the same two double-disc sets in their original packaging, but now put inside a nice slipcover. It's got a lenticular front that morphs from Ali G to Borat, showing HBO knows where its muffin is buttered.

Each season has six episodes, each built on a particular theme, but Ali G is the only character that sticks to the subject. For instance, in season 1, episode 2, the theme is "War," but that's the episode where Borat takes etiquette lessons. Still, the thread does end up tying each installment together.

The episodes included in the seasons are as follows: 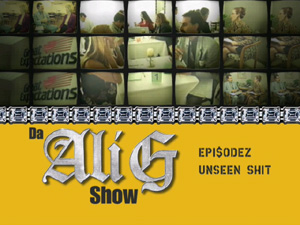 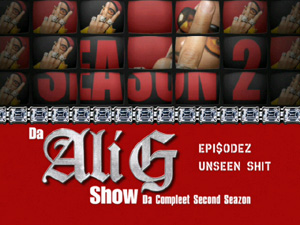 Sound:
The English audio tracks are mixed in 2.0, and there is a Closed Caption option.

Extras:
Both seasons have a variety of extras.

Da Compleet First Seazon has two unaired Borat segments, a glossary of terms used by Ali G, and the painful full version of the "Spyz" movie project Ali G pitches to Hollywood producers in episode 4. The best extra is the commentary on episode 1 by producer/writer Dan Mazer and in a rare out-of-character moment, Sacha Baron Cohen. If you've ever watched any of Cohen's guerrilla comedy and wondered how it's done, this is the closest you will get to an explanation.

The first disc of Da Compleet Second Seazon has the full Ali G commencement speech delivered at Harvard in 2004. You have to give whoever set that up a lot of credit, as it's a lot of fun seeing the character in that environment. Making it even better is the guy sitting behind Ali G at the left of the screen, who doesn't seem to appreciate this irreverent choice in speakers. He sits stone-faced, registering occasional disgust, though once or twice laughing in spite of himself. 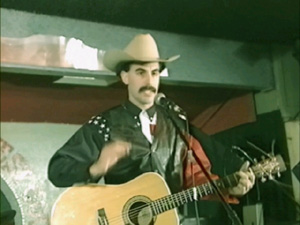 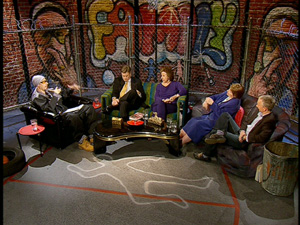 The second disc of Da Compleet Second Seazon comes with a large number of deleted scenes for all three characters. These aren't moments that were cut due to quality, but due to space, and so are as funny as anything that made the final programs. Ali G taking on Noam Chomsky's vocabulary skills, Borat playing decoy in a deer hunt, and Brüno hiring a medium to contact his dead boyfriend--it's all gold.

FINAL THOUGHTS:
Highly Recommended. No one is pushing the boundaries of comedy in the same daring ways as Sacha Baron Cohen. Da Ali G Show: Da Compleet Seereez couples both seasons of his groundbreaking HBO television program. Disguised as his three alter-egos--Ali G, Borat, and Brüno--Cohen engages in guerilla pranks that amuse us by drawing out the hypocrisies of the society we live in. It may make you uncomfortable, it may even offend you, but Da Ali G Show is going to make you laugh while it makes you think.