In 1956 the movie western was going through some tough times.  The genre that had been the staple of Saturday afternoons at the bijou for decades was on the decline thanks to the penetration of television.  Westerns were cheap to make; just get some horses, drive an hour or so out of LA into the desert and start filming.  TV prime time became filled with western shows, from Gunsmoke to Death Valley Days, the small screen had a good number of quality western shows to choose from.  If you could stay home and watch a western on TV for free, why bother going to the movies and paying?  After all, there wasn't a huge difference in quality. 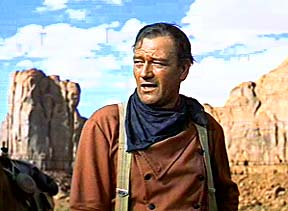 It was in this atmosphere that director John Ford decided to make yet another western.  He'd show everyone that westerns could still fill seats in movie theaters; you just had to give the public a great film and they'd come.  His 1956 film, The Searchers, was a great film.  It's universally acknowledged as being one of the best westerns ever made, and it is on the American Film Institute's list of the 100 best American movies from the first century of the cinema.  It's a still being taught in film schools across the country, and Entertainment Weekly readers recently voted it the 15th best movie ever shot.  Now this classic of cinema has come to Blu-ray with a wonderful looking print that will make it look like you're seeing the movie for the first time.

Ethan Edwards (John Wayne) left to fight for the Confederacy during the civil war, and three years after that conflict was ended he returns to his brother's homestead in Texas.  A gruff, easy to anger man, it's obvious that he's seen a lot, much of it that he'd rather forget.  When a neighbor's cattle are stolen, Ethan joins the posse to go after the rustlers with his brother's adopted son, Martin Pawley (Jeffrey Hunter), and has his brother stay with his wife and children.

After riding for 40 miles they find the cattle, slaughtered and left to rot in the desert.  Comanche Indians took the livestock as a diversion, a way to lure the men away from their ranches.  The posse turns back and when they get back to the Edwards farm they discover it burnt to the ground.  Ethan's brother, his wife, and their son murdered.  The two other children, both girls, have been kidnapped at taken by the Indians. 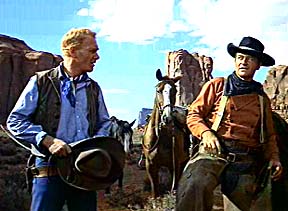 This starts a long search.  Ethan vows to find his missing nieces.  Martin accompanies him on his search, as does Brad Jorgensen (Harry Carey Jr.), the boyfriend of the oldest Edwards girl.  The track grows cold, but that doesn't stop Ethan.  As the weeks turn into months, and the months turn into years, he keeps searching for his niece.  At first to rescue her, but eventually to kill her since so much time has passed she's taken up the Indian's ways and no better than an Indian herself.

This is an amazing movie that can be enjoyed on many levels.  On the surface it is a solid adventure film with gun fights, battle scenes, and a tough as nails lead.  If you look just a bit deeper however, this movie struggles with some weighty issues.

The racism of the movie is the first thing that most people notice.  Ethan Edwards hates Indians.  He even doesn't like Martin who is 1/8 Native American, barely talking with him at the beginning of the movie and calling him names for most of the rest.  One of the most powerful scenes in a film that's filled with them is when Ethan and the posse discover a dead Comanche buried under a rock.  Ethan takes out his revolver and shoots the dead man's eyes out.  When a preacher asks him why he did that he replies:  "By what you preach, none. But what that Comanche believes; ain't got no eyes, he can't enter the spirit land. Has to wander forever between the winds. You get it Reverend."  As the movie goes on, his hatred of Indians becomes stronger if anything.  Even the other white settlers find his attitude unappealing and Ethan is shunned from society.  The Indians are equally racist.  The antagonist, Scar, hates Anglos as much as Ethan hates Indians, and they are just as savage as Ethan is because of their hatred.  This film shows the ugliness of racism without being preachy.  In the end, Ethan doesn't have any epiphany that he was wrong the entire time, but he does pay the price for his views.

The movie is also about redemption, and the search for forgiveness.  Ethan isn't just searching for his niece, he's looking for revenge and he hopes that taking his pound of flesh will make him whole again.  Martin is there almost as his conscience.  Martin is always the one who questions what Ethan is doing, and wondering if what he's doing is right.  What price do they have to pay in order to rescue an innocent girl? 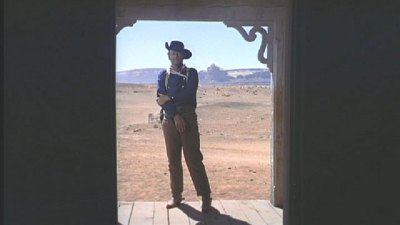 The film also deals with honor, morality, love, and friendship.  It is a very layered film, much more nuanced than one would normally think a western would be.  That's the reason that it is such a classic film; because it transcends the boundaries that usually enclose films of this genre.  It raises above them and comments on humanity and the human condition.

The acting was excellent across the board.  In Harry Carey Jr.'s autobiography, the character actor (who is still alive and kicking by the way) who appeared in many Ford films (including Three Godfathers and She Wore a Yellow Ribbon, both with John Wayne) says that Wayne was very different during this shoot.  He was Ethan Edwards both on and off camera.  Whatever he did to get into the role, this was Wayne's best performance.  He plays the anti-hero masterfully, giving Ethan depth and dimension.  The scene where Ethan hands Martin his will to read has Wayne acting both tough and nervous, and yet he's very believable.  Of course the climax of the film, which I won't give away here, is a cinematic classic.  Wayne's performance is stunning in its intensity.  The first time I saw the ending to this movie I wanted to turn away because I didn't want to see what I knew was going to happen.  This ending is still just as powerful today.

John Ford was a good director, but he surpassed himself here.  The vistas and beautiful scenery would be glorious to watch even if the film itself was a dud.  As it is, Ford's eye (no pun intended) makes this a gorgeous movie which adds to the impact.  He also uses the language of film to impart more information to the viewers; information that isn't nessisarily spoken.  The look on Ward Bond's face, just staring blankly ahead, when Ethan says goodbye to Martha, his brother's wife, says a lot about the relationship between those two people.  The way Ford has the ending mirror the beginning also says a lot about Ethan's fate without being too direct.

This Technicolor/Vistavision film looks marvelous.  It was restored just this year and the folks at Warner Brothers did a magnificent job.  The colors are bright, bold, and accurate.  The flesh tones, an area where color restorations usually have a hard time, look lifelike and realistic, while the big open sky is achingly blue.  The blacks are solid and strong too.  One of the real highlights of this film are the gorgeous vistas of the old west, and the plateaus and desertscapes look just fantastic.  There is a lot of dimensionality to the picture, especially the exterior scenes, and the image pops off the screen nicely.

The detail in this film is wonderful.  You can see the cracks in John Wayne's face, especially at the end of the film, and this gives the movie and even more powerful emotional impact.  The fine lines are strong and solid even in low light situations.  The picture is sharp and well defined.  There are no specks or scratches on the print.

Although the label claims that this movie is presented with an aspect ratio of 1.85:1, the frame is actually 1.75:1 which is how the film was originally released.

The film comes with the original mono soundtrack in English, Spanish, and French.  There were no multichannel mixes included.  While some may bemoan the fact that a DD 5.1 track wasn't included, I enjoyed listening to the film as it was originally intended to be heard.  (I'll admit that some scenes would have worked better with a surround mix however.  The scene where they are sneaking up on the Comanche camp for the first time and hear animal calls that may be Indians would have been very effective with the calls coming from all around to mimic the characters reactions.)  Being filmed 50 years ago, the audio track is rather flat.  There isn't much in the way of bass, and ever the few instances were highs are recorded they sound clipped.   The audio has almost no hiss or background noise, and the dialog is reproduced nicely.  While it doesn't compare to a recent film's sound, this audio fits the film nicely.

After screening so many Blu-ray discs with anemic extras, I get a thrill when I come across a disc like this one that has a good number of bonus features.  WB wisely waited until 50 GB discs had been perfected in order to have everything fit.  The disc starts off with a two or three minute introduction by John Wayne's son Patrick Wayne.  Patrick had a small role in the film, and gives a nice intro.

There is an interesting commentary by filmmaker Peter Bogdanovich.  He does a great job of giving some background on the film and insight into Ford's technique.  While I enjoy these scholarly-type commentaries, I'll admit it's a bit on the dry side.  More lively was The Searchers:  An Appreciation.  This half hour documentary has filmmakers Curtis Hanson, John Milius, and Martin Scorsese talking about how much this movie affected them when they first saw it and how it influenced their style.  One of the better featurettes I've seen this year, it is mandatory viewing.

A Turning of the Earth:  John Ford, John Wayne, and the Searchers is another half hour documentary.  This time voice-overs are placed over scenes from the film and behind the scenes footage to tell the story of the film's production.  While not as good as the previous featurette, it is still an entertaining look at the movie.

Also included are four vintage clips that were aired on TV to promote the film when it was first released theatrically.  Made to air after WB movies, these feature host Gig Young who interviews Jeffrey Hunter and Natalie Wood as well as taking a look at the Monument Valley shooting locations as well as discussing how difficult it was shooting at such a remote location.

The bonus items are rounded up by a couple of trailers.

This is a powerful strong film that has influenced a generation of directors.  Not only is it John Ford's best film, it's also the movie that proves that John Wayne was an excellent actor.  This Blu-ray disc looks magnificent and really brings this classic film to life.  The disc is also filled with extras that aren't you're normal fluff pieces.  A great film, wonderful transfer and solid extras.  What more could you want in a disc?  DVD Talk Collector Series.