"That's right. I've killed women and children. I've killed just about everything that walks or crawled at one time or another. And I'm here to kill you, Little Bill..." 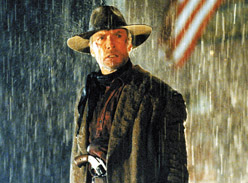 Clint Eastwood got his start in TV westerns in the US and became a big screen star playing in westerns that were Italian made.  In his 1994 Academy Award winning film Unforgiven, Eastwood returns to the genre that has been so good to him and takes a realistic look at gunfighters from the old west.  One of the best westerns ever made, it shows how quickly things can spin out of control when viloence is the only resorce people use. This powerful film has now come to Blu-ray with a nice transfer that's a distinct improvement over the SD disc and also includes all of the bonus features that are included on the 2-disc DVD set.

When a new prostitute in the city of Big Whiskey Montana, Delilah (Anna Levine), reactively snickers at the size of a drunken cowboy's penis, he flys into a rage and cuts her face up with a Bowie knife.  He, and the friend he rode into town with are subdued and the sheriff, an old-time gunfighter named Little Bill (Gene Hackman) is called for.

The whores want the two men to be hanged, but Little Bill is going to let them off with a whipping until the owner of the bar/house of ill repute complains that he's out a lot of money.  After all, he paid for Delilah to come out from Texas, and now she's ruined as a working girl.  Little Bill fines the men a total of six ponies and lets them go.

This is outrageous as far as the other prostitutes are concerned.  If nothing happens to the men who slashed Delilah, what's to stop others from doing the same thing?  They take matters into their own hands, pool their resources, and put a price of $1000 on the heads of the two men who maimed Delilah. 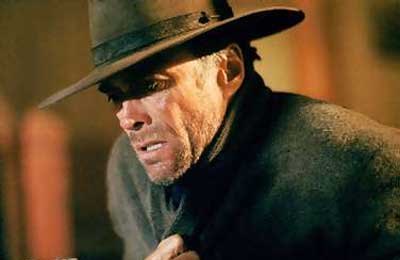 Will Munny (Clint Eastwood) used to be the toughest, meanest hombre around until he met the woman who would become his wife.  He gave up drinking and fighting for her, and settled down to farming.  After she gave him two children, Will's wife died of Smallpox.  He still was true to her spirit though, and stayed on the farm to make a go of it.

The only thing is he wasn't cut out to be a farmer.  His pigs are sick and he's low on cash, so when a young man who's heard of Munny's reputation rides up, Munny listens to what he has to say.  The man calls himself the Schofield Kid (Jaimz Woolvett), and has heard of $1000 reward for killing two cowboys.  He offers to split the money with Munny for his help.  After thinking about it, Munny agrees and he heads off with the kid and his old partner Ned Logan (Morgan Freeman).

Meanwhile in Big Whiskey, Little Bill has heard about the reward and isn't about to see his town turned into a shooting range.  He's seen what assassins can do, and so he takes steps to see that none of them come into his town.  He's a gunfighter from the old days too, and he knows how to take care of business. 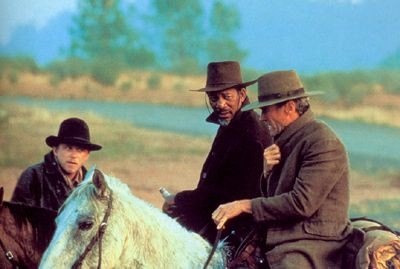 The thing that sets this movie apart from so many other westerns is not only the realistic depiction of violence, but the repercussions from it too.  Unlike all the TV shows set in the old west (and detective shows too, for that matter) violence has effects.  When someone is beaten up, they aren't jumping around in the next scene; they're laid up for days or worse.  A beating is a sever thing in this movie, as it is in real life.  The movie also shows how violence begets violence.   After Delilah gets beaten, more and more people are hurt and killed because no one is willing to stop the cycle.

Another aspect of this movie that is impressive is that the tight scripts shows how just about everyone is doing what they think is right.  The whores are just trying to protect themselves by issuing the reward, the sheriff is trying to protect the citizens, and Munny and Ned honestly think, from the story that they've been told, that these cowboys deserve to die.  Even the cowboys try to make amends only to have their gesture thrown back in their faces.  This isn't a movie of right verses wrong, it's a movie of right verses right, which make it all the more tragic.

It has been said that Clint Eastwood can only play one character, and there is some truth in that.  But he plays that character very well.  In this movie the aging gunslinger is tortured by his past.  He sees people that he killed years ago in his sleep, and every time a stranger rides up to his ranch he's afraid that it's someone out gunning for him.  He plays a character who hates himself and what he's done, but is trying to be a better person.  The scene between he and Delilah, when she offers him a "free one" and he turns it down because he's being faithful to his dead wife is very telling and touching, without being sappy.

Gene Hackman also does a good job as Little Bill.  A down to Earth soft spoken man, he seems to be the voice of reason.  When the head prostitute complains that the men who cut up Delilah aren't even going to be whipped, he pulls her asides and asks "Haven't you seen enough blood tonight?"  But when gunslingers show up in his town, he turns into a hard, cold, man who knows what he has to do in order to save his town.  He gives a superb performance.

The 2.40:1 image on this Blu-ray disc looks very good, significantly better than its SD counterpart, and would be a nice addition to anyone's collection.  The level of detail is superb.  Fine details are strong, with the crags, creases, and stubble in Clint Eastwood's face being clearly defined.  The large outdoor scenes are just as impressive.  The Montana scenery, with wide open skies and snow covered mountaintops, is beautiful and the shots of people riding through the countryside pop nicely.  The only real qualm I have is that some of the scenes are a little soft, especially in low light situations.  This is a minor flaw however and not prevalent throughout the film.

The scene where Gene Hackman confronts Clint Eastwood in the bar in Big Whiskey is a good example of how this disc improves over the standard definition release.  Going for a natural look, the interior of the bar is very dark and filled with shadows.  While some of the details do get lost in the darkness, the scene has better definition and a more realistic feel than the SD disc.  The blacks are dark and solid, and the many shades of brown that fill the movie are distinct.

On the digital side, things look very good.  This 50GB disc has plenty of room for the film and bonus features and compression artifacts such as posterization were not a problem.

For audio tracks viewers get their pick of an English DD 5.1 track or stereo tracks in Spanish and French.  The English track sounds pretty much identical to the track on the 10th anniversary SD release, and that's no necessarily a bad thing.  The movie is mainly dialog driven and so just about all of the action is from the front.  The rears are used, but not for flashy audio panning, more for atmosphere.  The rain at the end of the movie is a good example, surrounding the viewer while not detracting from the dialog.  The dynamic range was fine and while the .1 channel was only employed sparingly, it was effective.

This disc ports over all of the bonus items from the two-disc standard definition DVD release from a few years back, and it's great that BDs are finally getting all of the extras that their lower definition counterparts have.  These extras are all presented with 480 lines of resolution.

First off is a commentary track by Eastwood biographer Richard Schickel.  Schickel is a friend of Eastwood's (the man himself doesn't do commentaries) and was on location for the filming so he is well prepared to talk about this film and Eastwood's work.  The track did have some sizable gaps in comments, but what it lacked in quantity it made up for in quality.  This is an enjoyable track that had a lot of information about the characters in the film as well as Eastwood himself.

There are four documentaries too.  Eastwood on Eastwood is an hour long look at the star, filled with clips from his many movies.  Produced and directed by Richard Schickel, and narrated by John Cusack, Eastwood himself is prominently featured.  This is a nice overview of the man's work.

All on Accounta Pullin' a Triger is a series of more recent interviews with the cast of the movie, and it comes across as fluff, unfortunately.  A good amount of the 22 minute running time is devoted to clips from the film, and it just doesn't have the meat that I was hoping for.  The promotional piece that was made at the time the film was released, Eastwood & Co.:  Making Unforgiven, is a much better piece and features behind the scenes footage.  Eastwood...A Star is a pretty horrid short overview on Clint's career, and is not really worth watching.  Though it was made at the same time as Unforgiven, it comes across like a 1970's retrospective with horrible music and hokey narration.

The extras are wrapped up an episode of the TV show Maverick from 1959 that features Eastwood.  This was a nice thing to include, though an episode of Rawhide would have also worked well.

In a lot of ways this film is the final word on gunfighter movies.  Eastwood created a wonderful anti-violence film without being preachy or heavy handed.  This film won the Best Picture Academy Award in 1994 (along with 31 other major awards from various organizations) and it truly deserved it.  This Blu-ray disc looks wonderful and I'm glad to report that this disc has all of the extras that the SD DVD has.  Highly Recommended.