"This very land gave us the greatest movie star of all time. She was the greatest there ever was."
"Judy Garland?" asked Shadow.
Czernobog shook his head curtly. "He's talking about Louise Brooks," said Mr. Nancy.
Shadow decided not to ask who Louise Brooks was.
-From American Gods by Neil Gaiman 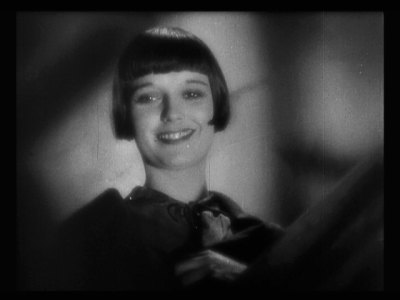 The German silent cinema produced some absolutely wonderful films. The Cabinet of Dr. Caligari, Nosferatu, and Metropolis are always the first titles to be mentioned, but for my money the German film from this era that packs the biggest emotional wallop and stays with you the longest is G. W. Pabst's masterpiece Pandora's Box. This film that revels in the decadence of Weimar Germany made an international star out of it leading actress, Louise Brooks, and is arguably the reason that we still know her name today. Criterion has released this movie in an exquisite two disc set that boast a very nice print and a wonderful amount of extras. This is easily the best silent film release for 2006.

Set during the Weimar Republic in Germany, a time of cultural and social freedom, Lulu (Louise Brooks) is an attractive kept woman who is used to getting what she wants, no matter what it is. When the man who is paying her bills, Dr. Peter Schön (Fritz Kortner), informs her that he is to be married, she refuses to let him go. She's been having fun with him and his money. She uses her feminine wiles to ensnare Schön, seducing him backstage at a play where his fiancée discovers them in a compromising position. 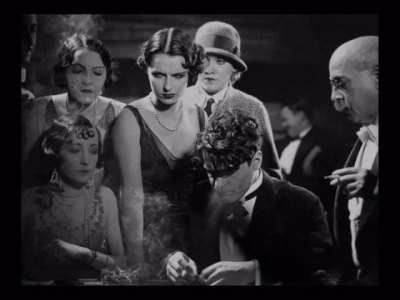 Schön marries Lulu, but soon after the wedding she grows tired of the much older man. His (adult) son Alwa (Franz Lederer) seems like much more fun. Schön is no idiot however and soon realizes what Lulu's manipulations will lead to. He knows there is only one way for him to get free of her. Schön takes a gun, gives it to Lulu, and orders her to kill herself. They struggle, the gun goes off, and Schön falls to the floor.

At the trial, Lulu is found guilty of manslaughter and sentenced to prison. Alwa can't stand the thought of being away from the woman he loves and with the aid of Schigolch (Carl Goetz), Lulu's aging pimp (for lack of a better word), they arrange for her to escape. Living underground and on the run from the police, Lulu still embraces her hedonistic lifestyle and continues to destroy people's lives where ever she goes.

This tale of self-indulgence and immorality is just as stunning as Louis Brooks in beautiful. The film packs a punch even today, 80 years after it was filmed. The credit for that goes to Pabst for creating a very modern looking film and to Brooks for giving such a powerful performance. 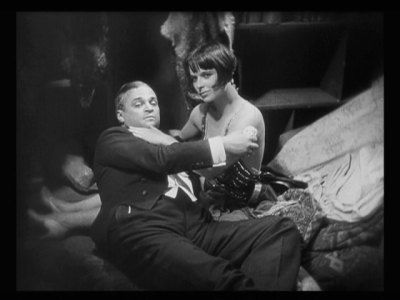 At the time of this film's release Louise Brooks was criticized for being wooden and not acting. Nothing could be farther from the truth. It's a testament to her incredible ability that she looks like she's not acting, she just IS Lulu. Brooks doesn't exaggerate any movement or expression; she acts natural and is at ease in front of the camera. Viewers can tell what she's thinking from the look on her face, she doesn't need to flap her arms to make a point. In this film Brooks conveys more with a look than most actors can with pages of dialog. An excellent example of this is when Lulu and Schön are caught backstage having sex by Schön's fiancée. When the woman bursts in, Brooks looks chagrined, startled, and a bit ashamed all at once. Underlying these emotions though is triumph and self satisfaction. She communicates all of this in just a look, and that's all she needs.

Brooks natural charisma also helps her in the role. She's so lively, fun, and such a gorgeous woman that it is very easy to see all of these men (and a woman) falling for her.

Of course Pabst gets a lot of credit for letting Brooks act so subdued and realistic. He crafted the film well, creating a very modern looking film but also a one where contradictions seem to be the order of the day. Lulu appears and acts innocent, but she's also a very carnal and her sensuality ruins all the people she comes in contact with. In the hands of a lesser director this seeming incongruity would have ruined the picture, but in Pabst's hand it makes the film all the more engrossing. The film is very understated and that adds to the almost horror of the piece. Like watching a car wreck happening, you know that something wretched is going to happen, but you can't turn away or do anything to prevent the act from occurring. It's wonderful in that way and that is what makes this film a true masterpiece of silent cinema.

This film boasts four (!) music tracks that viewers can choose from. I would like to say that I screened the film with each of them, but alas, there are only so many hours in the day. I alternated between the tracks as I watched the film, switching every 20 minutes or so.

The first is an orchestral score by Gillian Anderson. This track tries to recreate what music might have been played in a German cinema when this movie was originally shown. I was a bit too energetic and up for my tastes, though it certainly did have a German flavor to it.

The 'cabaret score' score was created by Dimitar Pentchev and is a more light hearted and fanciful musical track. I really enjoyed this track, especially during the party scenes in the film. At times I thought that this score didn't have the emotional impact that some of the other tracks did, when Schön is handing Lulu the gun and tells her to kill herself, for example.

Peer Raben creates a new, more modern, orchestral score for the film which I quite enjoyed. The final track is an improvised piano score by Stephan Oliva which was also very good. I would chose one of these two track to view the film with for the first time.

The movie is presented with German intertitles and optional English subtitles.

This movie is windowboxed to 1.33:1, a practice that many dislike. It's a hold over from the old days when many people had CRT TVs and overscan was a problem. I can appreciate the arguments both for and against the practice but it's not a practice that bothers me greatly. Since all viewers are assured of seeing the whole image that the director intended it doesn't ruin the film, and any loss in image size and resolution is minimal.

The print from the Munich Film Museum looks very good though I have to admit I think the Kino International/Eastman House print that was screened at the SF Silent Film Festival last year looked a little better. Needless to say I don't have it for a side by side comparison and my memory could be faulty. In any case, the level of detail in this print was excellent. The satiny sheen on Lulu's black mourning dress was clearly evident in the courtroom and her veil was clearly visible but still transparent. The film was stitched together from more than one source, and some of the footage is a little less sharp than the rest, but these softer bits were in the minority. While there were still many 'micro' scratches on the film, most of the dirt and major lines have been removed. There was very slight blooming in a couple of instances, but only a few. The contrast is wonderful, and there are a wide range of grey shades that make this film look nearly new. The main qualm I have with the picture is the fact that it pops slightly out of focus every once in a while. This is caused by the shrinking of the nitrate film stock and while it is evident, it isn't distracting.

The film is encoded on the disc in interlaced form, which means that there is combing, but this is very minor on this disc. It's unfortunate, but due to the nature of the beast just about all silent movies are interlaced.1 Even with these critiques, this is a wonderful looking disc.

Being one of Criterion's deluxe releases, this film comes with a wonderful assortment of extras. On the first disc along with the film itself is a commentary track with Thomas Elsaesser, author of Weimar Cinema and After and Femme Fatal author Mary Ann Doane. The two scholars were recorded separately and their comments stitched together for this track. It's a very informative, though a bit scholarly, discussion of the film, pointing out many things that I hadn't noticed before such as the fact that Pabst poses his actors to resemble statues or figures in the background several times during the film. Some of the interpretations and analysis that were offered I found to be a bit silly and over-analytical, but that sometimes happens in film studies. Even so, if you want to delve more into the underlying themes of the film, this is a great place to start.

The bulk of the bonus material is on the second disc. That starts off with Looking for Lulu, a 1998 documentary on Louise Brooks that was made for TCM. This is a very good biography of the star and includes interviews with people who knew her, actresses who admire her, and many clips from her films. 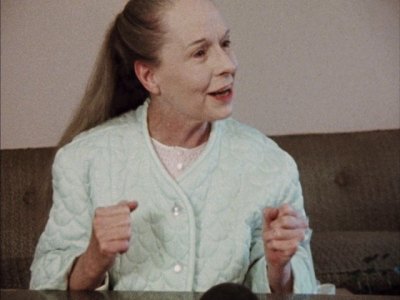 Following that is Lulu in Berlin, a fascinating interview with Brooks that was conducted in 1971 by Richard Leacock. This 48 minute featurette has the silent star discussing her days in Hollywood, what it was like in Berlin in the 20's, and how Pabst reacted to her. Brooks was a bit of a recluse, so this is a rare thing indeed. It is wonderful to see her reflecting on her past. She freely admits that she was hedonistic in her early years and is very unapologetic. Good for her.

There is also a 34-minute interview with G. W. Pabst's son, Michael. (It is in German with optional English subtitles.) Michael was born after his father created his most famous works, but there is still some interesting information here. Michael started writing a biography of his father and conducted extensive interviews with him before he died. Unfortunately the work was never finished and is unpublished.

There is also a gallery of 51 stills from the movie, and a very nice book of essays. The highlight of which is Louise Brook's own take on the making of the film "Pabst and Lulu" which was published in 1965. Criterion has put together a top notch set of extras, once again.

This is very powerful film that deserves its status as a classic work of early cinema. The Criterion transfer, while not perfect, is still very good and the copious extras and a wonderful addition. This is one of those DVD sets is just an all around great piece of work. Highly Recommended.

1) There is no standard running speed for silent films. It wasn't until sound came along that 24 frames per second became the accepted speed. Silent films vary in the frame rate that they were meant to be shown, and there are even existing notes to projectionists instructing them to change the playback speed during the film. Pandora's Box plays back at 20 fps, so if it were encoded progressively, the 3:2 pulldown software in your DVD player would still expect to see 24 frames instead of only 20 for each second of time, and would create an awful mess.