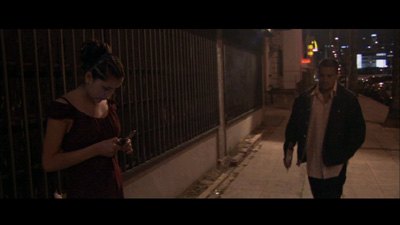 A quinceañera is the celebration of a young woman's passage into maturity. It takes place on her fifteenth birthday, and the ritual is celebrated across Latin America, as well as in immigrant communities in the United States. Sort of like how American girls make a big fuss over their Sweet Sixteen. The movie Quinceañera is about the clash between the old and the new, about the gap between generations in Echo Park, a Southern California suburb with a large Hispanic population. It opens with a celebration for Eileen (Alicia Sixtos), which goes from a church ceremony to a Hummer limousine where the girls dance on a stripper pole for the amusement of the boys, and ends up at a party in a rented night club. Within this mini-drama that starts the main drama, filmmakers Richard Glatzer and Wash Westmoreland (who also co-directed The Fluffer in 2001) begin to set up their major conflicts.

First is the conflict between the spiritual and the material. Ernesto (Jesus Castanos) performed the service for Eileen, but as her uncle, he can't believe the decadent displays of opulence her parents have sprung for. He's not going to do the same for his daughter, Magdalena (Emily Rios), whose own quinceañera is on the horizon. Ernesto can't see the need for the modern spins on the tradition, even if his daughter can.

This makes the conflict between old values and new values the second major issue. Eileen's brother Carlos (Jesse Garcia, The Shield) shows up late for the party, and he is tossed out by their father as soon as he walks through the door. At first, we think it's because he's a thug, but pretty soon we discover that Carlos is gay. His sexual preference got him thrown out of his house, and he now lives with Tio Tomas (Chalo González, Bring Me the Head of Alfredo Garcia), the oldest member of the family and, naturally, the wisest and the most understanding. Tomas gets by selling homemade confections to people in the neighborhood, but even as the make up of his family is changing, so is Echo Park. Tomas' house is the back building connected to a larger house, and when an upwardly mobile gay couple (David W. Ross and Jason L. Wood) buys the property, they come to represent progress in the guise of gentrification. As more white people snatch up property in the now-trendy area, fewer Mexican families will be able to afford to live there. When Carlos gets involved with the pair, and then breaks off to have a secret affair with the younger half of the couple, it's easy to see trouble is coming.

Magdalena's desire for a Hummer to ride to her forthcoming quinceañera becomes a moot point when she gets pregnant. She insists she is a virgin, a claim backed up by medical evidence (she hit the one-in-a-million jackpot by getting impregnated though non-penetrating sex), but her father isn't buying the story. Magdalena is exiled to Tio Tomas' house with Carlos, and the three form their own mini community. Through their struggles, both Magdalena and Carlos become more mature, and they begin to find support in each other.

The most winning aspect of Quinceañera is its cast, made up primarily of non-professionals and first-timers. Glatzer and Westmoreland let their actors go about their own way, giving Quinceañera an almost neorealist flair at times. As the camera follows Carlos and Magdalena through the back alleys of Echo Park, the viewer is let into a community that we don't often get to see. The directors peel back the posturing, both moral and macho, to see the people behind it. The kids are trying to get by in a territory that is unfamiliar to their elders, who either want to assimilate or pretend that things are no different than when they were younger. Carlos and Magdalena want to have both, and their only true sin is daring to try.

The film falters whenever it leaves that special space. The gay couple and their white friends are stiff and unconvincing. Their intrusion into the immigrant community is meant to be a critique of limousine liberalism and white, male homosexuals fetishizing Latin boys, but these scenes are too broadly written. Where the other characters ring true due to their specificity, the Anglos are too general. When the evil white landlords toss the poor minority family out of their home, it's a turn into cartoonish villainy that weakens the rest of Quinceañera's drama.

Quinceañera further falls flat as it reaches its end. The filmmakers opt for easy answers to their difficult questions, and the story takes predictable turns into territory where a hug is the most potent solution to any problem. The resolution is sweet and pleasing in its own way, but it's more suited to a cheap TV drama than a hard-hitting indie feature. While a movie like Thirteen took after-school special subject matter and removed the shiny lacquer that obscured the real troubles underneath, Quinceañera starts with the real and applies the gloss. This makes what could have been something special feel slight, sort of like throwing a party to celebrate your passage into adulthood but by the time all the guests go home, your behavior has proven you're still a child. 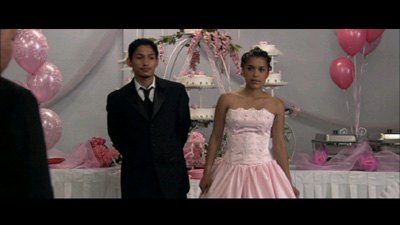 Video:
Quinceañera has an anamorphic widescreen transfer presented in a 2.35:1 aspect ratio and mastered in high definition. The picture is clear and crisp, adding to the realism of the film. Shot on location in the actual Echo Park neighborhood, Glatzer and Westmoreland, along with director of photography Eric Steelberg, give us an unadorned peek into a very real place.

Sound:
The bilingual English/Spanish soundtrack is mixed in 5.1, and a fairly good job has been done to keep the dialogue sounding like it was captured on the fly while also being clear enough to hear. There are also full 5.1 mixes in Spanish and Portuguese, and subtitles in English, Spanish, Portuguese, and French.

Extras:
Quinceañera has a handful of bonus features, including a feature-length commentary with the directors and the three main cast members, Emily Rios, Jesse Garcia, and Chalo González. The five trade off well, discussing the composition of the movie and the experience of making it. It's an interesting, detailed commentary, and the directors explain intended depths of the story that didn't necessarily come out in the narrative. Perhaps what fascinated me most was the many references to British kitchen sink dramas, in particular the inspiration drawn from Shelagh Delaney's A Taste of Honey. I could actually see the influence once it was pointed out.

A two-minute feature about the Los Angeles premiere shows a little footage from the red carpet and has cast interviews, but it's pretty inconsequential. More extensive is the twenty-minute behind-the-scenes. On-set and post-production interviews are interwoven with outtakes and rehearsal footage to introduce the creative team and explain how Quinceañera came together in a very short time. It's a good promotional piece where the enthusiasm of a very tight-knit crew definitely comes across. It's neat to see Jesse Garcia out of character, as he is so realistic as Carlos, and I liked seeing photos of Chalo González with Sam Peckinpah. The film's reception at Sundance is also covered.

"Mis Quince Anos" is the full three-plus minute quinceañera film from Eileen's party that she and the other girls watch in the movie. It's amusingly cheesy.

Eleven trailers for other Sony Classics releases are included.

FINAL THOUGHTS:
Rent It. Quinceañera strives for hard-hitting realism, but ends up with soft melodrama. A sharp cast of new actors mainly pulls the story out of the humdrum and the setting is realistic and fresh, giving enough reason to check Quinceañera out, but it's letdown of an ending discourages multiple airings. 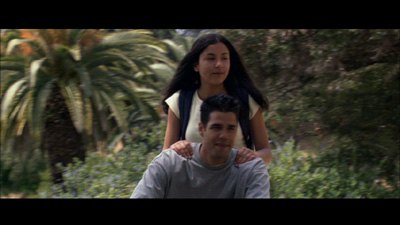