The 1980s was a wayward decade for a lot of people, but for punk rockers in particular, it was definitely not the best of times.

Punk was spawned from the boredom of the late 1970s, but it didn't take long for it to go mainstream. By the mid-'80s, the movement had been assimilated by popular culture and many of its icons had traded in their bad boy ways for a much shinier Yankee dollar. This left those who wanted to maintain the original vision of the genre in a bit of a wasteland: too out of date to matter, too stubborn to just fade away.

The 1987 independent feature Border Radio sits itself down smack in the middle of this conundrum. Made itself with a punk rock spirit, it was shot on 16mm black-and-white film over several years with a trio of student directors at its helm. The screenplay was written in tandem by the filmmakers--Allison Anders (Gas Food Lodging), Dean Lent (now a cinematographer), and Kurt Voss (Down and Out With the Dolls)--but in the spirit of true collaboration, it was fleshed out on set, with the cast improvising new scenarios. The result is something loose, ragged, and short, like a punk song on film; the downside is, like a lot of punk, it's a little shallow, stuck on one note for the duration.

Shot in Los Angeles, Border Radio features several important members of that city's music scene. Chris D., a member of the Flesh Eaters and Divine Horseman, plays Jeff, a popular cult musician who has seen far too much compromise creep into his act over the years. His friend and bandmate, Dean, is played by John Doe, leader of the seminal rock band X. Additionally, the score is done by Dave Alvin of the Blasters (whose pre-existing song also provided the movie's title), and he also shows up in Border Radio as a guitarist who has become estranged from Jeff. For rock stars, all three of these gentlemen are distinctly lacking in the charisma department. Their amateurish acting is just the beginning of Border Radio's problems, however.

When Jeff and Dean were at the end of their rope, they teamed up with obnoxious hanger-on Chris (Chris Shearer, Grace of My Heart) to rob a nightclub who they felt had exploited them (how punk rock is that?). As Border Radio begins, some thugs from the club have come looking for their money, and so Jeff hightails it down to Mexico, leaving Dean to take the beating and his wife, Lu (Luanna Anders), to answer the angry phone calls from Jeff's record label and take care of their daughter. On her search for Jeff, Lu gets suckered in by Chris and soon learns the true story about the robbery. She organizes a road trip to retrieve the pouting performer, but since this is the aimless 1980s, any journey of this kind is going to end up as self-reflexive and ironically pointless.

Border Radio bears the influence of Jim Jarmusch. It goes for the same kind of meandering ordinariness that was the hallmark of early Jarmusch classics like Stranger than Paradise. This is a difficult conceit to manufacture, however, you have to have a special eye for it. Either none of the three directors were cut out for this kind of storytelling or there were too many cooks in this kitchen, and so no real direction could be found. Border Radio is all over the place. It has traces of road pictures, crime movies, faux documentary, and kitchen-sink drama, but it never settles on one element long enough to give the movie any cohesion. At one point, John Doe even declares that he's in a western, and there truly is the whiff of the outlaw lingering around the production, but when it comes down to it, Border Radio plays it a little too safe to truly stand apart.

So, the sum of all these parts is that Border Radio is an interesting curio of its time. While some of the participants went on to greater cinematic glory--Anders has made some good pictures, and John Doe has been excellent in quite a large number of character roles--Border Radio is merely the entryway at the edge of that glory, and it comes off as such. 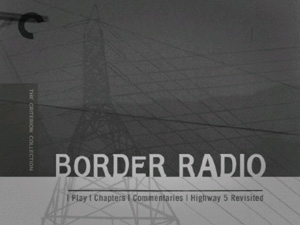 Video:
Dean Lent and Kurt Voss oversaw the Criterion Collection's high-definition transfer of Border Radio, so that would lead me to believe some of the problems with the picture were unfixable. In a couple of scenes, there were visible scratches on the print--which, according to the commentary, was a byproduct of the way it was shot. When these aren't there, however, the full frame, black-and-white transfer looks really sharp. Its aspect ratio is 1.33:1.

Sound:
A plain monaural mix, but cleaned up enough so that everything is easy to hear. There are optional English subtitles, as well.

Extras:
Even if I might have some issues with the quality of Border Radio as a film, I can't argue with its presentation on DVD. Criterion has rolled out the red carpet, gathering an impressive line-up of extras.

First, the movie has two separate commentaries. Codirectors Allison Anders and Kurt Voss take over one. In it, they explain how the film was made and some of the background of the people involved, including more on the background of the Los Angeles punk scene (their take is different than mine, but such is the relationship of artist and audience) and pointing out historic landmarks that were used as set pieces and are now gone. As film students, they also bring in their influences, particularly of German directors and the French New Wave. They are both entertaining speakers, and their past history (including a romantic relationship) allows for a rare chemistry that makes listening to them fun. This includes an argument over whether the Chris character is actually meant to be Kurt Voss or not.

The cast commentary gathers John Doe, Chris D., Luanna Anders, Dave Alvin, and Chris Shearer. As would be expected, each person talks about how they got involved in the movie and their role in its completion. Not all five people are in the same room. The musicians are all taking together, and Anders and Shearer share their recording time. Together, these five do give an interesting perspective, because none of these people had been in movies before and even while they were making Border Radio, they all had a healthy skepticism and disbelief during its filming. Having five people involved means there's enough conversation to ward off any lulls in the audio, but splitting them up prevents them all from tripping over each other trying to speak. Notable tidbits: Anders and Shearer explaining how the three directors worked together; Doe and D. laughing at some of the naïve dialogue about record companies and royalties; and Dave Alvin realizing for the first time that he used to have a mullet.

After the commentaries, there are other features. A 2002 documentary, The Making of "Border Radio," runs fifteen minutes and features all the directors, John Doe, and Chris D. It's a pretty good runthrough, though somewhat redundant after the commentaries. It's funny how both Doe and D. signed on for a film noir (Chris D.'s character shares the same name as Robert Mitchum in Out of the Past), and ended up in a meandering personal movie instead. As usual, too, it's fascinating to see people fifteen years after the filming and how they've changed. I also liked getting the context of where independent film was at the time, and the filmmakers' takes on what the current state of technology means for people making these kinds of features. If they could finish Border Radio with all the obstacles of equipment back then, no one has an excuse not to make their film with the access people have now.

There are nine deleted scenes, running about 23 minutes in all. The sound and video quality for these can be really terrible, but we do get to see more of the robbery and hear an attempt at hardboiled narration. Many of the snippets are actually earlier versions of scenes that were re-shot and made it into the final cut.

From the promotional department are the original trailer, an inventive radio spot staged as an in-character answering machine message from Chris to Jeff, and a stills gallery full of behind-the-scenes photos from Echo Park taken by Dean Lent (some of these are also used in the jacket design). For those curious about Chris D.'s background, there is a video for the Flesh Eaters song, "The Wedding Dice." Bios of the cast and crew are also on the DVD as text with current photos of some of the participants.

The usual Criterion liner notes include on-set photos, a list of songs in the film, and an essay on punk and the picture's production by music writer Chris Morris.

FINAL THOUGHTS:
Border Radio is nearly a "Recommended" DVD due to the Criterion Collection's excellent special features, but since the movie itself is kind of meandering and blah, I'll say Rent It instead. While it's a curious time capsule of a particular period in both independent music and, by its very existence, independent filmmaking, Border Radio will likely only appeal to you if you're interested in either movement, and even then, only as a minor distraction. Watch it for the spirit it was intended, and then, bump it up the ratings scale as you see fit. 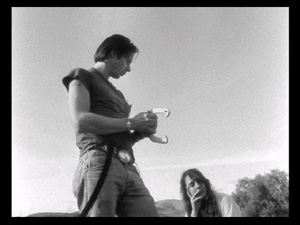