I suppose it wouldn't be a major surprise if I confessed that like millions of other cinephilles the only reason I wanted to see Bandidas (2006), a French-Mexican production co-written by Luc Besson and Mark Kamen, was the fact that it teamed up Spanish beauty Penelope Cruz with Mexican diva Salma Hayek. In a western! Could this film be as good as Louis Malle's Viva Maria! (1965)?

Bandidas follows the deeds of two women, Maria Alvarez (Penelope Cruz) and Sara Sandoval (Salma Hayek), as they struggle to outsmart a greedy American cowboy by the name of Tyler Jackson (country star Dwight Yoakam) and his posse of unshaved thugs. Snubbed by the American who appears on a mission to steal as much Mexican land as possible and transfer as much gold across the border as the foolish local bankers are willing to give him the two women become...bandidas! Why? Because taking the law in their own hands is the only way to avenge what Tyler Jackson has done to their families.

Along the way Sara and Maria get involved with Quentin Cooke (Steve Zahn), a notorious detective, who has been brought all the way from New York to catch (surprise, surprise) the bandidas. As fate will have it Mr. Cooke learns what the two women are after and becomes involved with...well, both of them! 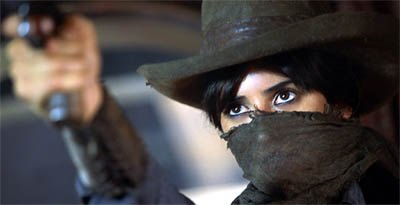 Described by its two mega stars as the right project to finally have them together in front of the camera Bandidas feels anything but right! Dull, full of clichés, and o, so utterly predictable this film should have never been made in the first place. For the ninety minutes Bandidas runs it becomes obvious that Norwegian director Joachim Roenning and his partner Espen Sandberg had nothing constructive to tell their viewers.

If there is anything remotely rewarding in this picture, a tiny reason why you might want to consider taking a quick look at it, I suppose it is the notorious scene where Cruz and Hayek teach Mr. Cooke how to kiss. The bandidas have the detective tied up on a bed unsuspecting what is coming his way. At first he resists, determined to "withstand" the women's desire. Then he discovers that the "lesson" is actually well-worth participating.

Some may see this as a good enough reason to recommend Bandidas. I certainly don't!

Presented in its original aspect ratio of 2.35:1 and enhanced for widescreen TV's the film looks quite well: colors are lush and convincing, contrast is by all means very impressive, print damage is nowhere to be seen. Occasionally I was able to spot some larger than usual softness (mostly during the night scenes) but overall what FOX have provided here certainly translates into a passable transfer.

First thing first I must note that I am a bit puzzled by the manner in which the audio is treated (please keep in mind that what DVDTALK was provided with is a not a finished product but one of those notorious FOX-screeners) – for some unknown to me reason there is an echo-effect throughout this presentation and I am certain this has nothing to do with how the film was intended to be seen/heard. I am inclined to accept that during the desert-prairie outdoor scenes a minor echo could be natural but what I am talking about occurs even when the protagonists are indoors.

This being said the English 5.1 track is clear with plenty of activity coming off the rears while the music score gets a deserving attention. The dialog is easy to follow and I could not detect any drop-outs or hissing(s). With optional English and Spanish subtitles.

Aside from a short featurette where Hayek and Cruz point out how this film felt as being the right project to step up together in front of the camera and a theatrical trailer you will also find a nicely done commentary with the two actresses where they talk about the history behind the film while also having a good time enjoying each other's company. All things considered listening to the commentary is actually much more entertaining than seeing Bandidas – the jokes Hayek and Cruz come up with are a delight.

Two gorgeous women, plenty of bad acting, one terrible film!! This just about sums up Bandidas. If you absolutely, positively, without a doubt, must see the Hayek and Cruz duo in action then by all means head to your local video-store. Otherwise do something more productive with your time!