There's a great moment in the 1998 BBC2 series The Royle Family: The Complete 1st Season - and it will come at different times for different viewers - when I stopped being horrified (in a very funny way) at what I was seeing, and realized that the makers of the series were really commenting not only on the Royle television family, but on me. After settling in with the first of the six, one-half hour episodes, and trying to get my bearings after the umpteenth "my arse," and "shite" reference, and laughing at what I thought was going to be a simple British gross-out "sitcom," it suddenly hit me what the series was trying to accomplish. With genuine perversity, the producers had crafted a telling, meaningful drama (that's also hysterically funny) that dared the viewer to feel superior to the Royles, and then let it sink in that the viewer was no better than the caged animals he or she was watching. And then to top it all off, the filmmakers had the audacity to further disorient you by letting you genuinely care about these people. In six short episodes, the makers of The Royle Family: The Complete 1st Season orchestrated not only a hysterically funny show, but a brilliant, oftentimes sobering look at our TV-saturated culture. 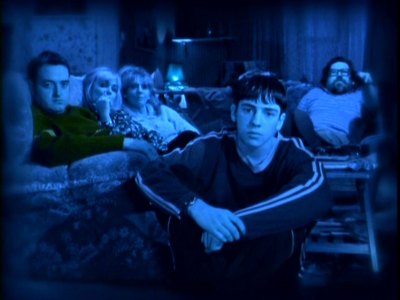 The series' premise is crushingly simple: the camera sits at eye level with the Royle family, a typical Northern England lower class family, and observes them as they interact with each other - almost always in the living room where they sit for hours, staring at the TV. And that's basically it, at least as far as the plots are concerned. The main story arc that follows through the six episodes of The Royle Family: The Complete 1st Season concerns the upcoming marriage of Denise and her fiancé, Dave. Denise (Caroline Aherne), the daughter of Jim and Barbara Royle, essentially does nothing but sit around in front of the telly, order items she can't afford out of catalogs, and (off camera) go to the pub with Dave (Craig Cash) to get "bladdered." Dave works as a furniture mover and part-time DJ for local pubs. Head of the family Jim (Ricky Tomlinson), an unashamed nose picker and crotch fiddler, apparently is on the dole (he never speaks about having a job), and is almost permanently welded to his sitting chair, flipping through the TV channels (when he's not getting up for an "Eartha Kitt," rhyming slang for...well, guess). His wife Barbara (Sue Johnston), who's never without a cigarette, fetches for him, whenever she isn't sitting on their horrible couch, commiserating with daughter Denise. And teenager Anthony (Ralf Little), perhaps the only family member the viewer can truly feel sorry for, is the put-upon "dogsbody" of the Royles, whose main purpose in life seems to be the family's fetch-and-carry servant for cigarettes and cups of tea. Other characters stop by to zone out in front of the TV, including dodgy grafter Twiggy (Geoffrey Hughes), who's always hawking something second-hand, Barbara's mother, Norma (Liz Smith), who predicts doom at every turn for the couple-to-be, Cheryl (Jessica Stevenson), the plain, overweight next-door neighbor friend of Denise, and Joe and Mary Carroll (Peter Martin and Doreen Keogh), Cheryl's parents.

Written by Aherne and Cash, the actors who play Denise and Dave, as well as comedian Henry Normal, and directed by Mark Mylod, The Royle Family is quite remarkable in its ability to throw audiences' expectations and stereotypes right back in their faces. By stripping away most of the conventions of classic TV sitcom construction (no laugh track, no plots to speak of, no "cutesie-pie,"adorably eccentric -- and thus fake -- characters, no overt, outside conflict that drives the comedy), The Royle Family dares the viewer to not only laugh at the Royles, but to see themselves as complicit in the Royles' plight, as well. There's a marvelously reflexive scene in The Royle Family that sums up the creators' approach perfectly. Bored out of their minds, as usual, and up for any kind of outside stimulation, several of the Royles rush over to their dirty windows to watch some neighbors get into their new car (yes, that passes for "an event" in the Royle world). The camera, set back about ten feet, holds and holds on their bent-over bottoms (we don't see their heads) as they crowd each other, trying to get a glimpse at this equally boring spectacle. And finally, one of them does what any group of apes would do in a zoo: he scratches his rear. And you get it; you realize this is like a zoo, and these "animals" are on display for you. And it's hysterically funny. But after the laughter dies away, you suddenly realize that the real joke is on you for watching the Royles watch the neighbors. Who's the more inane: the Royles for their crude, crass, boring ways, or you for sitting down in front of the telly watching them? Just as the Royles make surprisingly smart, cutting comments about the various TV personalities they constantly watch, you the viewer are doing exactly the same thing: watching fictional characters on a tube, and laughing at them. The viewer becomes the viewed.

And of course, once viewer identification occurs, sympathy naturally follows. Once you realize that the Royles are, deep down, no different than most people, amazingly, you start to care for them very much. While this season is very careful to never sentimentalize the Royals in any way, there's a lot of genuine emotion and caring in between all the snarky comments and frustrated, silent looks exchanged between characters. I love how the filmmakers linger on reaction shots long after a particularly dim-witted utterance (usually by Barbara), or a rude act (most likely by Jim). Sometimes those shots are wonderfully inscrutable, encompassing god knows how many years of a character's awkwardness and emotional distance, as well as yearning and love. Just once, the writers give the Royles a respite, and let them charm the audience, in the touching, funny scene where Jim plays the banjo and sings at one in the morning, just to cheer up and entertain his clan, who join in the spontaneous - and short-lived -- family moment. And occasionally, the creators go for a full-on, emotional moment, as in the season's last episode, where Denise finally gets married. There's a scene with Denise and Barbara, sharing a gentle mother-and-daughter moment together before going to the church, start to express how much they mean to each other. But the filmmakers, ever on the alert to keep the show honest and decidedly British in its black humor, have Jim come out at this very critical moment, and comment out loud about how badly he stunk up the toilet. It's hysterically funny and sad at the same moment, and shows the brilliance of The Royle Family 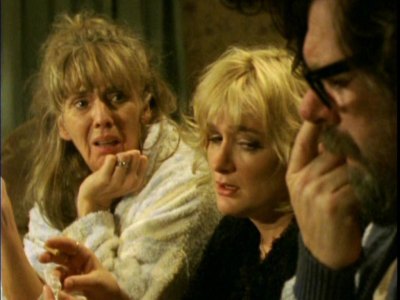 The Audio:
The Dolby Digital 2.0 English stereo soundtrack is just the right format for this dialogue-driven show. And thankfully, there are English subtitles available for some of those thick, Northern accents.

The Extras:
Unfortunately, there are no extras for The Royle Family: The Complete 1st Season. Not a commentary; not a documentary - nothing. Too bad.

Final Thoughts:
From the strange, surrealistic opening, where the TV looks out lovingly at its family the Royles, (accompanied by the haunting Oasis song, Half the World Away) to the final "my arse!" from Jim, The Royle Family: The Complete 1st Season is a mesmerizing, hysterical look at a TV-paralyzed modern family, and quite unlike any TV comedy you may have seen before. I highly, highly recommend The Royle Family: The Complete 1st Season.