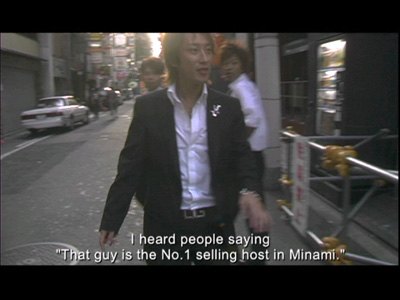 I haven't been disturbed by a film in quite some time the way I was disturbed by The Great Happiness Space. And this comes without any killing or blood or gore, no violence or physical illness whatsoever. Instead, Jake Clennell's documentary about the sordid world of hosting in Osaka, Japan, sends shivers through the viewer by laying bare how twisted people can be with one another.

The "star" of this movie is Issei, the top host at the leading entertainment club for women in Osaka, the Rakkyo Café. Issei is one of a cadre of nearly interchangeable boys, all sporting muscle Tees or designer suits and bleached Rod Stewart hair. They hit the streets and give come-ons to passing women to lure them into the club, where the ladies will then pay by the hour for the pleasure of one of these pretty boys spending time with them. Though these "dates" will sometimes turn to sex, the hosts attempt to stay out of that territory. It's much better to keep the girls on an emotional hook so that they'll keep coming back, day after day, until years have passed with them paying the exorbitant fees (usually about $12 an hour, but you can pay $50 an hour for a private seat) and buying endless bottles of champagne. Sometimes a particular host will juggle several girls at once, and he'll lie and tell all the girls he loves them. These guys make anywhere from $10,000 to $50,000 in a single month.

You're going to be hard pressed to know for sure how sincere Issei is being when he tells you that a host's job is to sell his customer a "dream." He says it often, and also explains that with his company, he "heals" the ladies after a busy day at work. Easing their loneliness and providing a secret world where they are the princess is what he claims his service to be. Intercutting interviews with Issei and his cohorts with private talks with the girls and fly-on-the-wall views of the party activities, Clennell shows us that what's being sold is anything but. 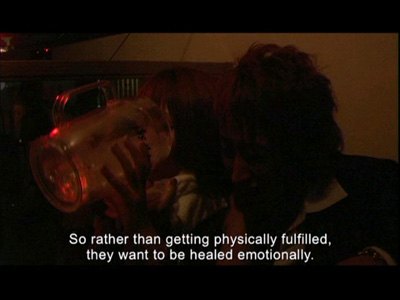 Jake Clennell is a first-time director. Most of his credits are in cinematography. He and his newbie editor, Hisayo Kushida, are smart, however. They put the Great Happiness Space together in a cagey way, setting up various pedestals only to knock them down. The customers at first come off as lonely, insecure creatures who are only being hurt in their pocketbooks, until we're told that most of them have turned to a life of prostitution in order to feed their habits. It's easy to believe that they are being sucked in by a snake oil salesman who will tell them whatever they want to hear to keep the champagne flowing, until the girls then admit that they frequent multiple host clubs and some even have boyfriends. The line between predator and prey becomes very blurry indeed.

Of course, blurry means the line is still there. It never disappears completely, and listening to Issei's endless sales pitch trotted out in bite-sized justifications for what he does for a living keeps the crosshairs of blame squarely on the hosts. These guys are masters of fuzzy logic, tossing out doublespeak to explain their purpose in life ("financially honor me" is one of my favorites). The footage always catches up with them, though, and whether it's seeing one of the girls clearly not having a good time as she's goaded into binge drinking or even the physical toll it takes on the boys, they can't hide the fact that they are living cold, soulless lives. Even the stoic Issei lets his guard drop, and Clennell eventually shows that the emptiest part of The Great Happiness Space is the hosts themselves.

I'm not sure I can assign much replay value to The Great Happiness Space. I know I'm not going to be watching it again anytime soon. Rather, I'm going to be busy scrubbing these guys and their Dolce & Gabbana belt buckles out of my brain. Nevertheless, I think it's the kind of film everyone should check out, particularly in our wrongheaded pimps-up, hoes-down culture. When you see the "love for money" game up close without a hint of glamorization or romanticism, it's hard to view it as anything remotely cool.

Video:
The Great Happiness Space is shown at 4:3 letterbox ratio (1.78:1). It was shot on video, and so it's been transferred over to disc at its original quality.

Sound:
No fancy sound mix, but they've done a good job of maintaining the clarity of live sound. The subjects all speak in Japanese, so there are English subtitles. Some of the lines travel by kind of fast, but they are always easy to see and read. As you'll see from the screen caps they are also burned in.

Extras:
There are absolutely no bonus features on this disc. I'm not sure I mind. I don't think I could have handled the things Issei had to say that didn't make the final cut.

FINAL THOUGHTS:
Recommended. I think most people will find The Great Happiness Space to be a real eye-opener. The business of "hosting" is a rather insidious one, and the presentation is so cold, it's chilling. For all the larger-than-life villains we see in movies, all it takes is one good documentary to show us how small real-life bad guys are. Jake Clennell leads us into the backrooms of a place that will be entirely alien to most of us, and this tour definitely will leave its mark. 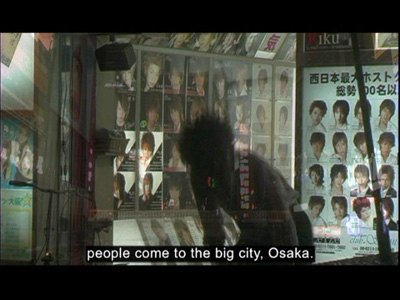