S'more Entertainment // Unrated // January 9, 2007
List Price: $9.99 [Buy now and save at Amazon]
Review by Stuart Galbraith IV | posted January 19, 2007 | E-mail the Author
A provocative quote in the Atlantic Monthly stating "You can learn more about America watching one half-hour of Let's Make a Deal than watching [CBS Evening News anchorman] Walter Cronkite for a month" probably was the inspiration for Deal (1978), a feature-length documentary on the iconically '70s game show, where contestants dressed in wild costumes hoping for a chance to trade innocuous items ("from aardvarks to zithers") for valuable merchandise hidden behind three curtains while avoiding "zonks" of worthless junk.* 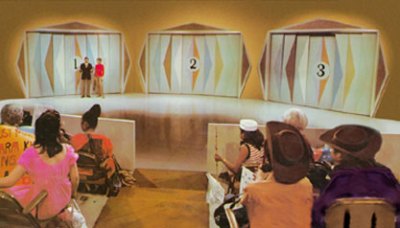 Directed by E.J. Vaughn and John Schott, in collaboration with cinematographer Robert Young, Deal was described by Film Comment's Amos Vogel as "hilarious, horrifying, apoplectic, bizarre, [it] attempts nothing less than to serve as a metaphor for a civilization." That's overstating things a bit. What the film is, really, is a straightforward, cinema verite style look at the production of one episode in exhaustive detail, from start to finish, buttressed with interviews and statistics about its ratings and the revenue it and other game shows of the period were generating. Though there are a few moments where contestants look foolish and some of the people behind the show come off as wealthy jerks, mostly it's left up to the viewer to draw his own conclusions from the presentation.

It's important to keep in mind that, when Deal was made, there was nothing like Entertainment Tonight and the plethora of behind-the-scenes documentaries about TV shows that exist today. When it was new, Deal really offered a rare peek literally behind Curtain Number One, Two, and Three.

Love it or hate it Let's Make a Deal, which aired from 1963-1977 (and was later revived) was seared into American public consciousness; if you owned a TV back in the 1970s, the show was almost impossible to avoid, at one point airing five times a week during the day and twice weekly in primetime. Watching Deal now, it's fascinating to go backstage as it were, to see how the show was pulled together, and to vicariously experience the giddy thrills and disappointments of its contestants.

(One of the more fascinating aspects of Deal is watching the extraordinary choreography involved in moving sets, props, and especially merchandise during tapings. This was no easy show to get out.)

Shot primarily in 1975 and '76 (though it includes footage of the original 1963 pilot as well), Deal is like a trip in the Way-Back Machine, awash in Hungry Man frozen dinners, Rice-A-Roni, Velveeta processed cheese, self-cleaning ovens, and Eskimo Pies. (Best Prize: "We're adding $700 worth of beef!")

It's easy to sneer at both the contestants and executive staff on Let's Make a Deal but whatever the filmmakers' intentions, neither come off particularly bad. Though the film alludes to contestants who had, earlier during the 1970s recession, been driven to appear on the program out of desperation, it's obvious most of the "civilians" are simply looking for a good time. No one's holding a gun to their head, and to condemn them would be like raking a bunch of senior citizens over the coals because they enjoy playing bingo. In choosing hopefuls for the "trading floor," as the program's main staging area was called, both the show's producers and the contestants manipulate one another trying to get what each wants. When tickets are finally handed out, the hysteria is so palpable you'd think they were giving away seats assignments on the last lifeboat of the Titanic.

Though there are some awkward moments involving the show's creators and writers, such as a comment made by the wife of one staff writer who condescendingly says, "We like to see poor people win," the show's staff consists of hard-working people simply doing their job, one that, despite the perceived glamour, is much like any other. The film explores the program as a fiendishly lucrative business that, in large part, passes off commercial advertising as entertainment. This is no great revelation, nor does the film intend it to be, though the amount of money involved is still staggering, even by 2007 standards. 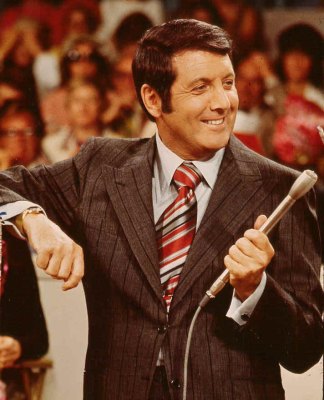 Co-owners Monty Hall and Stefan Hatos, along with writers like Alan Gilbert, Nat Ligerman, and Berni Gould, as well as announcer Jay Stewart, are in varying degrees defensive after more than a decade of critical backlash. Hall points to how his celebrity has in turn enabled him to spend much of his time fund-raising on behalf of the Variety Clubs charities, while others argue that the show provides an opportunity for ordinary people to win trips abroad and the like that otherwise might never come.

In the end, television hasn't changed all that much, only the lack of subtlety in shows like Let's Make a Deal has been replaced, with more subliminal and indirect consumer-trigger mechanisms.

Deal is presented in its original full frame format in an okay transfer that appears derived from something other than the original camera negative. The image isn't great but perfectly adequate, as is the mono soundtrack. No subtitles are offered.

The only extra is a trivia game, a supplement okay for nostalgia buffs but otherwise of very little use.

Anyone expecting salacious revelation from Deal will likely be disappointed, but as a document of a '70s TV game show there's much that's fascinating and revealing. Recommended.


* The Halloween-like atmosphere wasn't planned. When the show first went on the air in 1963, contestants appeared in business suits and semi-formal dresses, but then somebody showed up in a clown suit and succeeded in getting host Monty Hall's attention. The rest, as they say, is history.