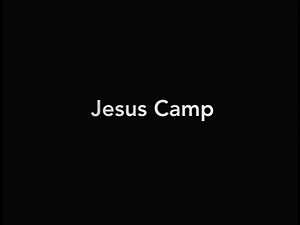 
The Movie
In no way do I side with the Muslim extremists who aim to destroy the American way of life, but I do feel we did no good for ourselves by casting the country as a theocracy in electing a born-again president who rules based on his religious beliefs and claims to talk to God. That smooth move put a target on our backs and gave the holy rollers depicted in Jesus Camp the sense of righteousness that can only further divide the nation and make us more of a symbol of the religious rule we sought to abolish by establishing a new country so many years ago, with that wacky concept known as the separation of church and state.

So, as someone increasingly frustrated at being represented by a government whose playbook seems to be borrowed from the Holy Crusades, when I saw the trailer for Jesus Camp, I was equally fascinated and horrified. Seeing children espousing views that they are far too young to truly understand brings to mind some of the darker parts of humanity, the ones that rob kids of their innocence and force them to grow up too quick and without their own sense of themselves (something you see glimpses of in the film when the adults aren't watching.) Sure, some will say that's insulting these kids' intelligence, but that's up to you to decide. Seeing how the parents here shape their children into clones of themselves through homeschooling and censorship, they probably don't have an intelligence of their own to insult. 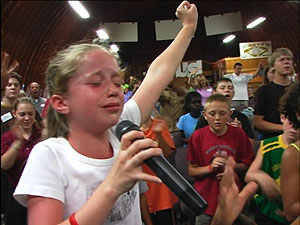 The funny thing is, none of what is said above is in the film. At least, it's not there if you don't want to see it (with the exception of Air America host Mike Papantonio's presence as a commentator.) Instead, directors Rachel Grady and Heidi Ewing turn on their cameras and watch as Becky Fischer teaches her young charges at the "Kids on Fire" camp to become the next generation of evangelicals, a countering force to the fanatical martyrs-in-training they see as their opponents in the battle for control of the planet's souls. You say po-ta-to, I say po-tah-to, you say religious education, I say twisted brainwashing, which comes through loud and clear in the adults' casual throw-away comments and more boastful statements.

The stars of the show are a trio of ragamuffins who would rather go to church than to Disneyland, Levi, Rachel and Tory. Most parents would kill to have kids so well behaved, self-assured and positive. But ask most people, and they seem a bit creepy, with their judgemental views and forceful opinions, especially Rachel's, while Levi, with his trailer park haircut and preechy tone, and Tory, who's far too close to eligibility to have such strong opinions about abortion, are the kinds of kids that need to be home-schooled to prevent them from the daily schoolyard abuse their personalities would rightly welcome.

Anyone looking for a perfect villain might find one in disgraced preacher Ted Haggard, who was busted for his gay meth affair shortly after being filmed for this movie. Between his hypocritical stance as a closeted hate monger and his rather brutal handling of Levi's adoration, he's the face of evil that Fischer doesn't fully provide, despite some of her lines, including many unfortunate references to war, being so over-the-top that they feel like they should be in a parody, not a documentary.

Now that you've gotten through the bile I've spewed regarding the crazy christians so I'll tell you this: Jesus Camp will appeal to Godless liberals and redneck conservatives alike. It's simply a terrific story told with true filmmaking skill. The only people who might not like it would be those who view the adults actions as child abuse (an easy leap to make) and evangelicals with a twinge of doubt, as it could hold up a rather uncomfortable mirror. Plus, as a bonus, there's a ton of MST3K moments to have fun with. 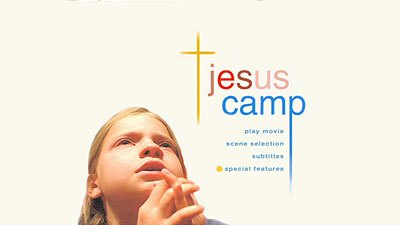 The DVD
Packaged in a standard keepcase, this one-disc release has an animated, full-frame main menu, with choices to watch the film, select scenes, adjust subtitles and check out the special features. There are no audio options, though there are Spanish subtitles and a closed-captioning track.

The Quality
Shot on full-frame digital video, the film is good, but not great, delivering a solid image, but without he sharpness you see in higher-end video. Colors are correctly reproduced and the level of detail is rather good. The only real negative is the excessive video noise seen in darker scenes and some occasional digital artifacts.

Presenting the well-recorded dialogue is a Dolby Digital 2.0 track that won't wow anyone, but doesn't introduce any problems either. Music beds interact cleanly with the subjects' speech, which is the only other source of audio, as there's no narrator. There's nothing remotely dynamic about the presentation, but that's not really necessary anyway.

The Extras
There are a pair of extras included, which, as expected, focus on the film, and not fluff, like on the directors' Boys of Baraka DVD. A feature-length commentary gives Grady and Ewing the opportunity to talk about the production process and the subjects, and their chat is even more evenhanded than their film, as they express a wealth of positivity about the kids they filmed. Once again, the directors seem to get lost in watching the film and talking about what's happening, but they bring it around in the end.

A set of 15 deleted scenes help explain the film's point of view, as these moments might have tilted the film a bit more against the Evangelicals. More shots of the camp kids and their more extreme behaviors is exactly what the anti-camp audience is looking for from this movie. 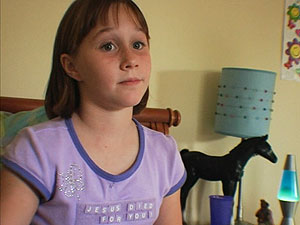 The Bottom Line
Jesus Camp is a wonderful look at how adults imprint their own values onto children, and, no matter how unbiased the film is, how disturbing that control can be when it's used to attempt revolution. The filmmakers have done an excellent job of objectively portraying a polarizing subject, when it would have been very easy to come at it with an agenda, and as a result, it's a film that people on both sides of the divide can hold up as supportive of their views. Unless, of course, you happen to be in Haggard's camp. The DVD looks and sounds as good as it could, considering the limitations of DV documentary filmmaking, and the extras, though brief, are interesting and entertaining. If you want to see an absolutely solid documentary with absolutely fascinating subject matter, this movie is a great pick-up.