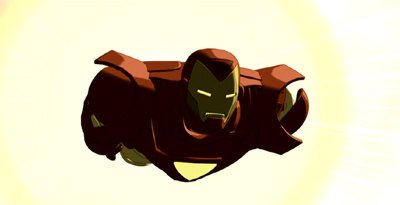 I am very pleased with the current migration of Marvel and DC into other forms of media. With more attention being paid to feature films and animated series there truly is no better time to be a comic book fan. While DC seems content with airing TV series, Marvel has been doing well with direct to DVD animated movies. The Ultimate Avengers was well received among fans and garnered an equally enjoyable sequel. Now it's Iron Man's turn to play all by himself.

The Invincible Iron Man brings Marvel's billionaire playboy Tony Stark back into the animated realm. This time around instead of acting like he's an established character the DVD tells the tale of his origin and first adventures as the man in the iron suit. Now, as a fan of the comic book let me tell you right up front that there are discrepancies between this origin and the original. Instead of picking those apart just take a look at this DVD as if it were a separate universe and that inner fanboy will quiet down.

The show starts out with an ongoing excavation of some Chinese ruins. Terracotta statues, ancient buildings, and massive, yet ominous pillars leave the foreboding sense that this place is better left untouched. Add that to constant attacks on the excavating party by a well-armed guerilla group and you have quite the situation on your hands. Tony Stark isn't the kind of man who backs down though so he keeps the operation going with intent to raise the ruins via liquefied steel.

Back in the States Tony actually finds himself in hot water with the board and his father. Because the expedition has been so costly in terms of money and lives Tony is let go from his position in the company. This naturally gets him fired up and he sets out to China to find out exactly what's going on. Once he arrives his convoy is attacked by the guerillas and he is injured in the assault. The end result leaves him clinging to life with a failing heart but fortunately enough for him his best engineer is there along with an abundance of Stark technology.

Not only do he and his friend manufacture a workable and portable artificial heart but Tony also has an ace up his sleeve. Hidden in crates around the encampment where they are being held prisoner is a collection of trinkets that, when assembled, form an Iron Man suit. Now, it's a little too convenient that in the span of a few days they assemble the massive suit of armor with no difficulty. I mean, they are supposed to be captive, Tony's heart has just been operated on, and isn't a little silly that the guerillas would have all of these crates but never notice an Iron Man suit? At any rate Tony becomes Iron Man and the two escape.

Shortly thereafter Mandarin's Elementals come to life and begin searching the world for their master's rings. This is what the guerillas were trying to prevent so in a sense Tony is responsible for the resurrection of Mandarin. This grates on his conscience and basically means that only he has the responsibility and power to stop it. Using a variety of Iron Man suits, Tony begins taking down the Elementals one by one. Outnumbered and seemingly outgunned Tony continues the fight as if the weight of the world was on his shoulders. The ensuing conflict escalates and there is an eventual, and predictable, twist in the whole Mandarin resurrection plotline.

I enjoyed watching The Invincible Iron Man but it didn't open any new doors for me as an Iron Man fan. From the start the story was pretty straight forward and predictable though a few twists kept the adventure exciting along the way. Some of the character development also felt kind of forced to me with things simply happening for no reason other than to further the plot. I guess there is the argument that this is a cartoon and therefore intended for a younger audience but I do have to say that it's handled in such a manner that adults will still be able to enjoy it.

In the end The Invincible Iron Man should be considered an achievement by comic book fans. The solid adventure features a lot of action and a rich comic book atmosphere that will leave you wanting more DVDs just like it (such as the upcoming Dr. Strange title). Anyone that has ever flipped through an Iron Man comic definitely should check it out but if you're merely a supporter of the genre you'll appreciate the effort taken with this release. 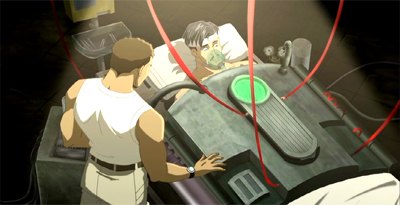 The Invincible Iron Man is presented on DVD with a 1.78:1 anamorphic widescreen ratio. Because of the digital production of the show the image quality remains sharp and clean the entire way through. Along the way there are a few moments where compression and aliasing is evident but for the most part there is little to gripe about. The show's color palette doesn't utilize a lot of contrast and instead maintains a murky appearance for a majority of the film. The big gray suit combined with the muted color tones give this release an almost Iron Giant-like quality. More of the famous red and yellow suit would have made things pop a little more than they do. Overall this is a fine transfer that looks very good.

With a 5.1 Dolby Digital presentation for both English and Spanish, The Invincible Iron Man impresses with some smart use of all channels. The dialogue remains almost entirely on the front channels with booming sound effects and music being picked up by the rear. The sense of immersion is strongest during battles and will give your bass a nice workout but at other points the presentation could have been better. I didn't encounter any technical flaws while watching the program though it's worth mentioning that no subtitle tracks are included on the DVD.

A few decent supplemental features make their way to The Invincible Iron Man DVD. First up is an alternate opening sequence that actually left me sad to see that it wasn't used. The comic book inspired presentation and foreboding narrative give it weight and sets up the story perfectly.

Up next is a feature that talks about the origin of Iron Man. Though it mainly focuses on the show the comic book is incorporated into the background and the producers discuss some of the steps that they had to take to make the origin fit into the given time frame. It helped to clear up some stuff but even so it's hard to deny the hokey nature of some of the origin in the show; which is also something that they address. After this feature is a gallery of sorts that shows some of Iron Man's armor from over the years. A gallery of concept art, a preview for Dr. Strange, and some trailers are all that remain on the disc after these extras. 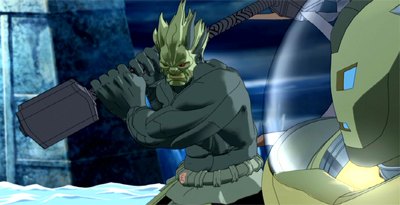 The Invincible Iron Man is another Marvel Animated Feature that fans will definitely want to check out. This new tale of his origin and battle with Mandarin is a lot of fun from start to finish. Sure there are a few bumps along the way but in the end you'll be entertained if you were ever an Iron Man fan. Even if you're not that diehard you can still use this to hold you over until the live action release slated for 2008. Recommended