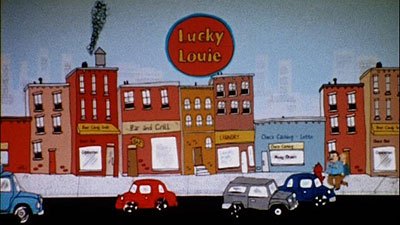 
The Show
Right off the bat, I'll say, though I grew up loving sitcoms, the only comedies I watch these days are "30 Rock," "My Name is Earl" and "The Office." I can't stand to watch a simplistic comedy that aims to entertain the masses, as my tastes rarely connect with the average person. Thus "Lucky Louie" should have been right up my alley.

Unfortunately, like Louie, I had to make a financial decision just before the show hit the air, and as a result, HBO and the other costly movie channels left my cable bill. It was an easy choice, as the last series I cared about on HBO was probably "Dream On," but I wasn't happy about missing out on Louis C.K.'s profane homage to the sitcom. I figured I'd see it eventually when the obscenely-priced HBO DVDs were released, but I didn't expect the show to be cancelled before I saw a single episode.

In watching the 12 episodes that made the air though, it was obvious the show would never succeed, whether as part of the "nuturing" cable landscape that killed edgy comedies like "Huff" or the brutal network world that slaughters non-conformist series like they are a threat to national security. Ironically, in a world that embraces "reality" television, this show was just too real. 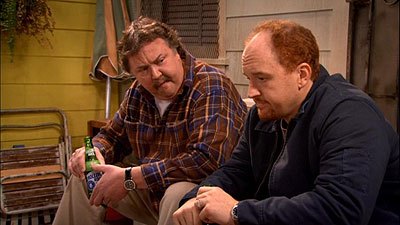 That sense begins with Louis C.K., the titular Louie, the star and inspiration behind the series. A stay-at-home dad who works part-time at a muffler shop, Louis isn't living a dream life plagued minor nuisances, like the majority of sitcoms. Louis is locked into a life of mediocrity, and he's accepted that, as long as he gets a little sex occasionally. He's the kind of guy you can root for, as he's an everyman.

That's where his wife Kim (Pamela Adlon) comes in. A trash-mouthed little dynamo, she's the family's breadwinner, putting food on the table as a nurse. She also gets many of the best lines, often at Louie's expense. It's hard to understand how such a hot little lady with such a self-assured sense of herself stays with an anchor like Louie, but she does, and she enjoys a healthy sex life with him, unlike most married TV couples. Their sex life is often at the core of the story, and it always results in big laughs, as its a more realistic portrayal of sex than I think I've ever seen. Kim uses her hotness as a way to get Louie to do what she wants, and Louie gladly takes it in trade. They both know where they are coming from and it's an accepted relationship.

As is often the case with people with a healthy sex life, they have created a child, an adorable munchkin named Lucy, who bounces between "Oh gee" cute and Goddamn annoying, much like a real child does. The best part of her character is the way her parents react to her. They may love her, but they don't try to sugarcoat the annoyance she brings. When Louie says that she's an *******, he means it, because she is one. And it would be hard to argue with him. A surprising amount of episodes focus on her character, including "Discipline," which is heartily depressing to anyone with a young child. Fortunately, they are never cloying like most shows about kids.

It would hard to be cloying with the supporting cast on this series. Louie's boss and best friend is played by gruff TV vet Mike Hagerty, with his wife being played by Laura Kightlinger. An odd couple, they work well together, and Kightlinger is as good as she's ever been as a sexed-up housewife with no internal filter. Another couple, Jerry Minor and Kim Hawthorne, live across the hall from Louie's apartment, and give the series an uncomfortable edge thanks to the uneasy racial integration between Louie and Minor's Walter. Though they don't have a lot in common, and Louie can't cope with the racial difference, they bond in their marital discord, making the show's one true "buddy" relationship work very well.

The show has it's share of wacky "neighbors," starting with Kim's brother Jerry, a burnout played to scumbag perfection by Rick Shapiro. Though his long freak-outs are somewhat Kramer-ish, he does a good job of making the character fun and creepy all at once. The same goes for Jim Norton, who seems to be playing himself while portraying Louie's pot-selling pal Rich. Wearing the worst costumes ever to grace TV, he does basically the same thing he does when guesting on the Opie and Anthony radio show, which means he delivers some of the most ridiculously insane dialogue in a loud manner, which is very funny. But one of the most memorable scenes of the entire series, when Rich faces off with Kim, is classic and hysterical, as Norton shrinks into himself and shows a bit of acting ability.

Though the series is a sitcom, it doesn't go for the standard sitcom plots, just the classic construction. So when Kim and Louie are fighting because of a gift, it isn't because he forgot their anniversary, but because he doesn't pay attention to her, and bought her a gift she implicitly said she didn't want. A story about Lucy being a bad kid doesn't see her straightening out, but instead, her parents just give up. The show also gets to touch on some plots network TV can't, like Kim's lifelong inability to climax, a hellspawn child and the use of a confession booth as therapy. By blending traditional TV with a more modern, realistic sensibility, the show achieves a surreal level of existence that lends itself well to comedy. And there are some penises thrown in for good measure. It's essentially "Married with Children" without the cartoonish behavior, and a lot more laughs. 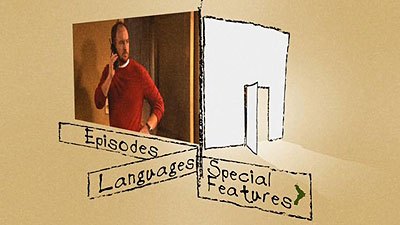 The DVDs
The 12 aired episodes are spread across two DVDs, which are packaged in a slipcased standard, single-width keepcase with a tray for the second disc and an insert that lists all the episodes. The discs feature anamorphic widescreen main menus, with options to watch the individual episodes, select languages and check out special features. Audio tracks include English and Spanish Dolby Digital 2.0, while subtitles are available in English, Spanish and French, along with closed captioning. An odd inclusion is the Series Index, which is essentially an episode selection menu for the entire series, but which only works if the episode is on the disc you're watching. There's also a preview included for each episode, which is odd, since you don't have to wait to watch the episode. Why not dive right in?

The Quality
The anamorphic widescreen transfers on these episodes are crisp and vibrant, a result of the show being shot on video with very simple sets that are very brightly lit. The image is crisp and free of any digital artifacts, and the color is spot-on.

The audio is a standard TV-quality stereo track, which fits the show perfectly, as it creates that sitcom feel the rest of the show captures so well. Dialogue is delivered clearly and without distortion.

The Extras
A couple of extras memorialize the series, starting with "A Week in the Life of Lucky Louie," which spends 17 minutes showing the production process that went on behind the scenes. Interviews with the cast and crew are mixed with lots of on-set footage to show how "Lucky Louie" was made.The most interesting part was how much HBO executives were involved, which might explain why things went wrong.

Though the tracks are laced with bitterness about the show's cancellation (especially on Norton and Shapiro's commentary), there's a lot of good info about how the show came together, as Louis C.K. and company mix stories from the set with reactions to watching the show, creating a friendly and fun set of commentaries. Their thoughts about the reaction to the series are especially appreciated. Whoever decided to put Norton and Shapiro in a recording booth together though gets the prize for inspired DVD production, as these two lunatics set each other off talking about the show's end and their work on the series, making for a bizarre and entertaining track.

Also found on this set, separate from the rest of the show's run, is a 13th episode, which was never aired by HBO. "Clowntime is Over" sees Louie compromise his dignity by taking on the role of "Mr. Pizza Box Man," entertaining children to earn the money for Lucy to attend dance class. At the same time, Kim is dealing with how her rough-edged personality is viewed by Ellen and the moms at the dance class. There are some good solid laughs here, including a rather satisfying conclusion, but it doesn't feel like the ending the series should have had, after the way the 12th episode wrapped up. 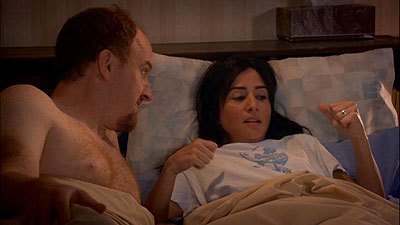 The Bottom Line
"Lucky Louie" isn't for most viewers, a fact that's rather obvious considering it was cancelled. That doesn't mean it wasn't a very good sitcom, and one of the more original series to grace TV in a while. Sure, it's foul-mouthed, pessimistic and utterly nihilistic, but at its core, it's simply funny, and once in a while, it even has a bit of heart. But most importantly, it's more real than any sitcom to come down the pipe in decades. The DVD set looks and sounds solid, as solid as such a simplistically constructed series can be, and the extras, which serve as a eulogy of sorts, are good as well. If you want to just laugh along with the lower class of America and the struggle to exist, this series will deliver some big laughs for you to enjoy.