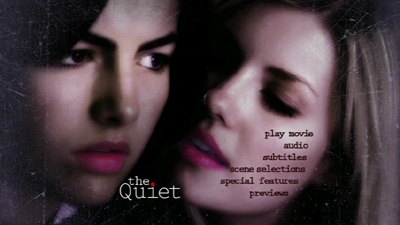 The thing about silence is that it usually means there's something someone isn't saying.

In The Quiet, last year's suspense chiller from director Jamie Babbit (But I'm a Cheerleader), everyone is hiding some kind of secret. Most of them are individual secrets, but trouble starts to brew as more and more, they become information that is collectively shared--and then buried. Who knows what? How do they feel about it? What are they going do now that they know?

The catalyst for the unraveling is Dot (Camilla Belle, Ballad of Jack & Rose) a deaf-mute who has been adopted into the Deer family following the death of her father. Dot's has been a life fraught with tragedy. Her mother died when Dot was seven years old, bringing on the girl's condition. So, to be entering the well-to-do clan should be an upgrade. Daddy Paul (Martin Donovan, Weeds) is a successful architect, and mommy Olivia (Edie Falco, The Sopranos) is an interior designer. Their daughter Nina (Elisha Cuthbert, 24) is popular and on the cheerleading squad. On the surface, all is perfection.

But you don't have to look very far to see the facade start to crumble. The house that Paul and Olivia have built, what should be the big payoff for their years together, remains unfinished, only partially decorated and spottily furnished. It might look good from the outside, but it's hollow when you go too far in. Olivia has a problem with pills extending from a hip injury, so she has trouble staying on task. Not that Paul gives her much support. As the family planner, he has the designs all wrong. Dot catches on to these things pretty quick. When you move through any place silently, and when people think you can't hear them, guards drop. Dot wants to be invisible, and a lot of the time she is. Even when she's in plain sight, they talk like she's not there. Ironically, she also ends up being the one person people can confess to, thinking they can unload their shame without the consequence of the information being passed on.

The worst secret that Dot discovers is that Nina and her father have been having a sexual relationship for years. With his wife absent emotionally, Paul's resorted to desperate measures that he can't stop, and neither can Nina. It's questionable whether or not they even want to. In fact, Nina is the most interesting character to watch. Her motivation flip-flops constantly. One minute she is strutting around like she is the sexiest girl on the planet, the next she's complaining she's fat and withdrawing. Or she might be saying how much she hates her father moments before admitting she thinks she might like his affection. When she reaches out to Dot, putting lipstick on her to give her some color, we only see that this sisterly gesture is a ruse when Dot takes a look at the grotesque makeover in the mirror. Outstanding performances from Donovan, Falco, and Belle are to be expected, but Elisha Cuthbert is the real surprise of The Quiet. She plays Nina as complete and complex, and never once does it seem like she doesn't have a handle on what the character is going through. Yes, this girl is confused, but whatever her mood, whether she is vulnerable and crying or a nasty monster lashing out, Nina believes that what she is feeling right then is true. Cuthbert never let's the character's conviction wane.

An alliance of sorts forms between the two girls when Nina thinks she's discovered Dot's secret, something I won't reveal here just in case it hasn't already been spoiled for you. Once again, the cheerleader's motives for bringing this troubled girl into her circle are two-faced: she wants to mess with Dot and try to expose her, and she's also really looking for someone to help her find a way out of her situation. She tells Dot everything, including her plan to kill her father. This puts both girls on a rather thin tightrope, with Nina seriously plotting murder on one side and her playing cruel mind games on the other. Which side the pair falls on becomes the crux of the plot. 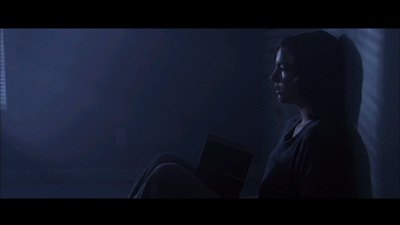 This is the second time I've reviewed The Quiet (the first is here), and what struck me about the script was how tight it really was. Though the team of Abdi Nazemian and Micah Schraft have done some TV work, The Quiet is their first feature. Knowing where the story was going, I watched for places where they might have allowed the logic to drop out, maybe telegraphing too much or tossing us a piece of information that wasn't properly set up. Outside of one instance where a plan that had not been discussed onscreen was mentioned by one of the characters, everything was solid--and even that was likely down to a convenient edit. There was a space of time where it could have been discussed. Even the sidebar subplots of Dot being pursued by a boy (X-Men's Shawn Ashmore) and Nina's toxic relationship with the sex-obsessed Michelle (first-timer Katy Mixon) fit snugly in the larger emotional plot, adding to the themes of secretiveness.

It's too bad The Quiet didn't get more attention when it was first released. It's a moody character piece full of tension and intrigue. Even when you think you have it figured out, there are a couple of twists waiting to surprise you. At the same time, it's not just about thrills and putting the audience on edge, but the characters actually go through some personal growth and changes. In the end, it's about learning to quell the silence and finally speak up.

Video:
The anamorphic transfer is presented at a 2.35:1 aspect ratio, preserving the subtle lighting of Jamie Babbit and cinematographer M. David Mullen (best known for working with the Polish Brothers). As they explain in the extra features, The Quiet was shot digitally and, when possible, with natural lighting. This is particularly effective when inside the Deers' home, which is often lit only by moonlight trickling through the windows into the empty rooms.

Sound:
A variety of audio options are presented. The main mix is a 5.1 English soundtrack, and it has lots of atmosphere, keeping the tension alive by moving certain sounds to the back speakers and keeping others right up front. There is also a 5.1 Spanish dub and a Dolby Surround track in French. Subtitle choices are English, French, Spanish, Chinese, and Korean. When the disc loads up, it actually asks you if you'd prefer to continue in English or Chinese. 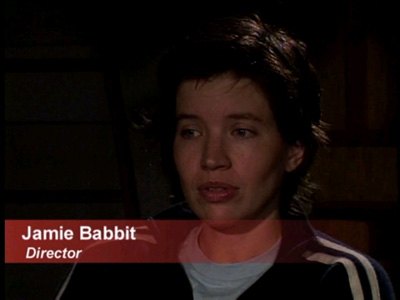 Extras:
There are five bonus featurettes, which you can watch individually or use the "play all" function to view all at once. While they do tend to fit together and should flow well one to the other, with only a little overlap in clips shown, there are short credits sequences at the end of each feature that end up interrupting the transition from one element to the next.

All of the material was shot on set and features the actors and crew. The first documentary is a rather odd choice. Entitled "Fetal Pig, Fetal Pig, Let Me In: Dissecting the Dissection Scene" (4 minutes 50 seconds), it focuses entirely on the decision to use real pigs and how they were acquired for the scene in Biology class. I am not exactly sure why someone thought this should be a subject for a bonus feature, but they did. I will extend a warning to all cat owners that there is a scene after the end credits of this mini-doc' that I think is intended to be humorous, displaying a cat that has been opened and put on a display board. It's pretty gruesome.

After that, things are much more standard. "Locations: Shooting in Austin" (7:25) looks at the real sets used for the movie, and "Sans Celluloid: The Quiet and Digital Cinema" (4:30) discusses the unique challenges of working with DV. Ironically, the interview with the man from the technology company providing the equipment looks really crappy. After that, you have "Script Development" (9:30), which is essentially a two-part behind-the-scenes about the evolution of the story, starting with the genesis of the script with the writers, edging over to how Babbit and Mullen set it up and worked with their budget, and coming back to how rewrites were done for on-set needs.

Finally, "Cast" (9:50) is a rundown of the major players, with Babbit talking about how they were chosen and the different actors discussing their approach to their roles. Oddly, Camilla Belle isn't interviewed for this, and neither is Shawn Ashmore (though he does show up briefly in "Locations").

All the features have footage from on the set, and there are some brief snippets of scenes that didn't make the final cut, including multiple mentions of a storyline about Michelle denying her true sexuality.

FINAL THOUGHTS:
Highly Recommended. The Quiet whispers its way under a viewer's skin, laying out a tragic family situation and the damaged players trapped inside it. With strong performances by Martin Donovan, Camilla Belle, and Edie Falco, plus a stand-out showing by Elisha Cuthbert, it has some seedy thrills on the surface but a more complex agenda underneath. Turn out the lights and load this DVD up, and see if you don't find yourself riveted to it until all that's left unsaid finally comes out. 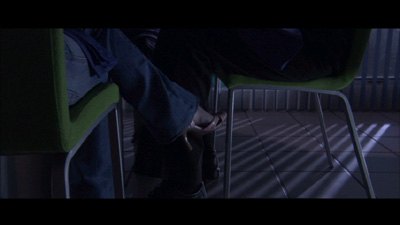