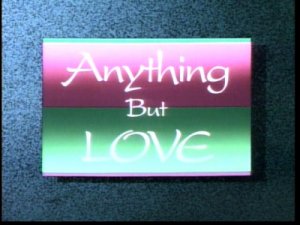 Anything But Love a television series that first aired in 1989 and finished in 1992. The series was a sitcom about two people who met on a plane and later became co-workers. The two also became fast friends, and while friendship was the majority of their relationship, there was always something more between them. In Anything But Love: Volume 1 includes all twenty-eight episodes from the series first (6 episodes) and second (22 episodes) seasons.

Prior to this review, I had never seen a single episode of Anything But Love. And after watching one episode, I could not stop. The show's headlining cast members, Jamie Lee Curtis and Richard Lewis, are wonderful together and they have great chemistry. The show itself has its shortcomings, but it is, nonetheless, a fun adventure with two delightful characters.

In the pilot episode of the first season, the two main characters and introduced and their kooky universe is setup. Hannah Miller (Jamie Lee Curtis) is a former school teacher who spent three tours teaching in Los Angeles' inner city. She returns to her hometown in Chicago to go for her dream, which becoming a writer. By chance she meets a rather neurotic passenger on her flight. That passenger is Marty Gold (Richard Lewis). He is an award winning writer, who is also slightly neurotic, overly eccentric, and scared of almost everything. Hannah helps him get through the anxiety of the plane flight, which wins his friendship. He later helps her get a job at Chicago Weekly as a research assistant.

In addition to the main characters, there are several supporting characters that join Hannah and Marty. Leo Miller (Bruce Kirby) is Hannah's father. He is a retired cop who lives in the country and paints. Pamela Peyton-Finch (Sandy Faison) is the pretentious high-life senior writer at the magazine. Jules Bennett (Richard Frank) is the straight-but-obviously-gay secretary. Norman Keil (Louis Giambalvo) is the no gruff, hard up boss who demands and expects the best from his crew. These supporting characters offer little to the humor. It is really Jamie Lee Curtis and Richard Lewis who drive the show. In the second season, nearly the entire supporting cast is replaced.

As for season one episodes, the pilot is great. It is a very basic episode and the opening, which takes place entirely on a plane, details the great chemistry the two leading characters have together. With plain and simple dialogue, they make the situation an absolute riot. The remaining season one episodes feature additional silly and fun episodes with the two main characters shining bright. 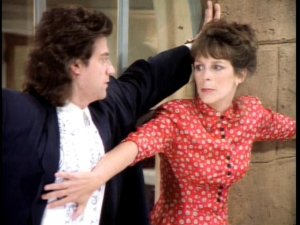 In Anything But Love's second season, the show underwent several cast changes. Hannah comes back from her vacation and the magazine is under new management. Norman was fired, Pamela is gone, and the new boss is Catherine Hughes (Ann Magnuson). She is tough and wants the magazine to focus on anything and everything that is hip. She also promotes Hannah to be a staff writer and hires a new face, Brian Allquist (Joseph Maher). He is a writer from London and a renowned book and theater critic. Another new face is Robin Dulitski (Holly Fulger). Robin is Hannah's good friend and roommate. Robin provides a kooky character on the home front.

Similar to season one, the supporting cast is weak. Catherine turns out to be a oddball character (part of her humor, I guess). I found her overly pretentious and annoying (part of her character, I guess). She never came off as a great character. Brian gets in a few laughs here and there. However, it always centers on his perverted point of view. He is a horny Englishman and his jokes get old quick. Robin feels forced. She is loud, obnoxious, and rarely funny. The two main characters continue to have fun dynamic, especially with Hannah's promotion. Previously, the two had an almost boss/subordinate relationship at work. In season two, they are colleagues and there are a couple storylines when the two butt heads about being the better writer and whatnot. I thought the change worked nicely.

In addition to Hannah and Marty's new and improved dynamic, they get into a variety of situations this season. One of my favorite episodes was "Those Lips, Those Thais". Tia Carrera guest stars as Marty's foster daughter. She comes to the United States to attend college and Marty finds himself a little too attracted to her. His reaction to the situation (and himself) is priceless. Other strong episodes include "Hotel of the Damned", Hannah and Marty have to share a hotel room and the sexual tension gets unbearable, "Bang, You're Dead", Hannah dates Marty's shrink and he freaks out!, and "Hearts and Bones", Marty dates another woman and confronts Hannah's jealousy.

Overall, while Anything But Love: Volume 1 was my first experience with the series, I was quite happy with it. The show features two actors who clearly have great chemistry together. They manage to turn somewhat simplistic, yet very neurotic situations into a blast. On the flipside, the supporting characters are lacking and sometimes the storylines feel dry. There are also times when the content from episode to episode feels very much the same. Yet, despite these shortcomings, I think Lewis and Curtis' strong dynamic make up for it. Anything But Love is worth seeing. 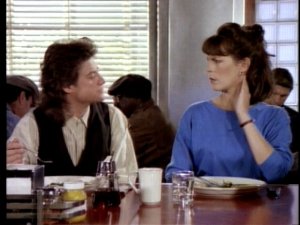 1. Pilot - Fear of Flying: In the series pilot, aspiring writer Hannah Miller hears about the "perfect" job at Chicago Monthly when she helps a journalist afraid of flying.
2. Deadline: Competition for the magazine's cover heats up between Pamela's article on sex and Marty's piece on chemical waste, which Hannah loses in the computer.
3. Burning the Toad (A.K.A. The Jack Story): Hannah and Marty work to "burn the toad" who's been running a scam; Hannah's old boyfriend (Robin Thomas) tries to convince her that he's been transformed into a prince.
4. Love and Death: Marty thinks he's made it to manhood when he receives his first death threat, but he doesn't want Hannah to know that he's living in fear.
5. Dorothy Dearest: Hannah decides to "guilt" Marty into dealing with his mom after he becomes angst-ridden during her surprise visit.
6. This Is Not a Date: Marty gets dumped and Hannah is down on her birthday, so misery gets company when the two decide to go out.

7. Ch-Ch-Changes: Hannah and the magazine both undergo changes when the hip new editor shakes everything up, especially easily rattled Marty.
8. Those Lips, Those Thais: Marty does a very good imitation of a Jewish mother when his Thai foster daughter shows up to attend college in Chicago, but he succumbs to Jewish guilt when he finds himself attracted to her.
9. It's My Party and I'll Schvitz If I Want To: Hannah tries to warm her relationship with Catherine by throwing a party, but a heat wave leaves her guests cold.
10. Scared Straight: Hannah and Marty trade bylines to prove Catherine's been using favoritism, and Marty winds up in jail for protecting "his" source.
11. Mr. Mom: The recipient of Hannah's deceased mother's heart is wasting his life away, so she gives him a pep talk that could push him over the edge.
12. Just The Facts, Ma'am: Hannah sweet-talks the fact-checker into letting a libelous quote slip through.
13. Bang, You're Dead: Marty has an anxiety attack when he finds out Hannah's been dating his shrink, but he feels sheer angst when the dashing doctor dies in her bed.
14. Truth Or Consequences': When someone leaks gossip about Catherine to an underground rag, she makes everyone take a lie-detector test.
15. It's Better To Have Loved and Flossed: Marty's trip to the dentist includes making a date with Robin, who is clearly ready to sink her teeth into a relationship.
16. Hearts and Bones: Marty finds it hard to swallow when Hannah insists she's not jealous of his new girlfriend (Kate McNeil) and invites them to dinner to prove it.
17. Woman on the Verge of a Nervous Breakdown: After not getting mentioned in a pop-culture legend's diaries, Catherine decides to be "ordinary" and leaves Marty in charge of the magazine.
18. Breast of Friends: Hannah makes a cause célèbre out of a woman who was kicked out of a restaurant for breast-feeding, while Marty nurses his ego after bombing on a talk show.
19. Hotel of the Damned: Catherine forces Hannah and Marty to check into a hotel to work on a deadline story.
20. All About Allison: Hannah gives a young journalist a shot at working for the magazine, but the woman stabs her in the back, using Marty as the weapon.
21. Proof It All Night: When Catherine forces the staff to pull an all-nighter, Hannah votes for enthusiasm, while Marty opts for dread.
22. Three Men on a Match: Hannah, Marty and Robin run into trouble in a restaurant when Robin sees an old flame.
23. Partying is Such Sweet Sorrow: Marty's girlfriend throws him a surprise birthday party---then Marty springs a surprise on her in front of the guests.
24. The Ice woman Cometh: A corporate trouble-shooter goes gunning for Catherine by taking romantic aim at Marty.
25. Hooray for Hollywood: When Marty turns down an offer to turn one of his articles into a movie, the producer decides to do lunch with Hannah instead.
26. Robin Q Public: Robin shows her smarts when Catherine, impressed with her spin on the magazine, brings her on as a consultant.
27. The Days of Whine and Haroses: Hannah joins Marty at his family's seder, where they break matzo with Marty's former fiancée; a woman (Judy Parfitt) is angry over one of Brian's reviews.
28. Thirty... Something: Hannah's 30th birthday prompts her to reflect on life and love, and her little voice tells her what's missing is Marty. 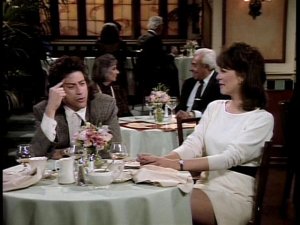 
Video:
The video is given in its original television aspect ratio of 1.33:1 full frame color. The picture quality is pretty considering its age. The image is a bit soft at times and there are noticeable traces of grain that is due to video compression. For the most part, it is a viewable presentation that will look better on smaller screens.

Audio:
The audio in this release is in English 2.0 Dolby digital stereo. There is also a Spanish 2.0 Dolby digital mono track. (Episodes "Truth or Consequences", "Partying is Such Sweet Sorrow", and "The Days of Whine and Haroses" do not have the Spanish track.) The quality is quite good. The audio is fairly flat, which is due the show being dialogue driven and the stereo track offers very little in terms of dynamics.

There are also subtitles in English and Spanish, as well as support for closed captioning.

Final Thoughts:
Anything But Love is a sitcom about two co-workers who continually try not to let desire, lust, and romance get in the way of their friendship. The leading actors are Richard Lewis and Jamie Lee Curtis. They have great chemistry together and manage to turn relatively simple situations into a riot. Prior to this review, I had not seen the show. It only took one episode to get me hooked. Those who enjoy witty comedies with likable, leading characters will get a lot of fun out of this two season set. The only reason disappointment I have with this set is Fox's decision to use double-sided DVDs.