Dentist on the Job

Other (International) // Unrated // February 22, 2005 // Region 2 // PAL
List Price: $19.28 [Buy now and save at Sendit]
Review by Stuart Galbraith IV | posted March 6, 2007 | E-mail the Author
Though it's not even listed in Leonard Maltin's Movie Guide, the first few minutes of this innocuous little sequel to 1960's Dentist in the Chair has nonetheless been seen by scads of Monty Python fans. In a brilliant, inspired gag, push "play" and the special edition DVDs of Monty Python and the Holy Grail actually begins with the opening titles and first scene of Dentist on the Job (1961) before one of the Pythons steps in and cues the proper film. The movie itself is only fair and typical of the sort of amusing little comedies Britain's film industry once cranked out regularly to the delight of working class audiences. 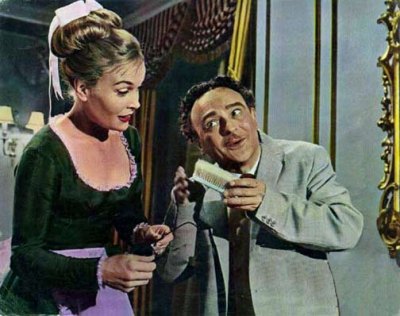 Shirley Eaton and Kenneth Connor in Dentist on the Job

Dentist on the Job reunites four of its predecessor's leads, though the picture can be enjoyed with no knowledge of the earlier film. Cheery David Cookson (Bob Monkhouse) and Brian Dexter (Ronnie Stevens) are newly graduated dentists; despite cheating on their final exams, they still ranked lowest in their class, much to the chagrin of their long-suffering dean (Eric Barker).

Meanwhile, Mr. Duff (Reginald Beckwith), an advertising executive at Proudfoot Industries, a Dow-like cleansing products conglomerate, is with assistants Fuller (Ian Whittaker) and Bull (David Glover) having a hell of a time convincing the public to embrace the company's line of Dreem Toothpaste. About to be sacked by the company's president, Col. J.J. Proudfoot (also Barker), Duff comes up with a plan: find a famous dentist to endorse the unsavory toothpaste in a new, high-profile campaign.

The only catch is that any dentist endorsing such a product will immediately be struck from the dental register, but with the dean's help Duff finds ideal rubes in Cookson and Dexter, both initially unaware that they're about to lose their accreditation.

After stumbling around the Proudfoot factory, with Cookson falling for the company's glamorous television model, Jill (Shirley Eaton, famous as Jill Masterson in Goldfinger), the boys realize they've been duped, and with their ex-con pal Sam Field (Kenneth Connor) decide to invent a new, superior toothpaste, despite the (unmotivated?) efforts of executive Macreedy (Richard Wattis) to sabotage their work.

Dentist on the Job is a mild, "little comedy" produced by Anglo-Amalgamated, and no doubt inspired by their concurrent "Carry On" film series. Monkhouse had starred in the first, Carry On Sergeant (1958), and Eaton and Connor were already seasoned veterans of those films by 1961. Moreover, fey, owlish Charles Hawtrey, another Carry On favorite, makes an amusing guest appearance in the opening sequence as a beleaguered pharmacist.

However, while Dentist on the Job is filmed in the style of those earliest Carry Ons it's not nearly as funny. The script by Hazel Adair and Hugh Woodhouse lacks the agreeable balance of slapstick and double-entendre wit of Norman Hudis's scripts for the Carry Ons, while the direction of C.M. Pennington-Richards (the Invisible Man TV show) is no match for Gerald Thomas's work on the more popular series. Notably, none of this talent was particularly versed in film or television comedy, while Monkhouse is credited with writing (or rewriting) additional material.

Still, the actors give it their all, and as a result some of the performances override the generally tepid, formula material. Monkhouse and Stevens are fine, though Connor's typically sputtering delivery of barely-contained nervous energy comes off best, particularly late in the film where he masquerades as a visiting U.S. Senator.

Dentist on the Job is given a terrific 16:9 enhanced widescreen transfer. The black and white film is presented in its original aspect ratio of 1.66:1, with a modest black bar appearing on the left side of the image. Though single-layered, this is a fine transfer, very sharp with little signs of age-related wear. The Dolby Digital 1.0 mono is likewise impressive for what it is. There are no subtitle options, and there are no Extra Features.

Fans of '60s British comedies and Monty Python completests will want to seek this modestly-priced, nicely transferred disc out, and for them it's Recommended, while others will find it much too mild and routine.