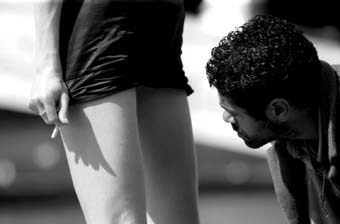 A beat up scammer whose life is dangerously spinning out of control Andre (Jamel Debbouze, Days of Glory) meets the beautiful Angel-A (Rie Rasmussen, Femme Fatale). On a bridge in Paris minutes before she is going to commit suicide!

She jumps, he follows, eventually the two become friends!

Determined to make up for the favor Angel-A offers Andre a way out of his misery. She is going to earn a large amount of money for the scammer so he could pay off a group of local thugs. But things become rather complicated when Andre learns how Angel-A plans to help him. 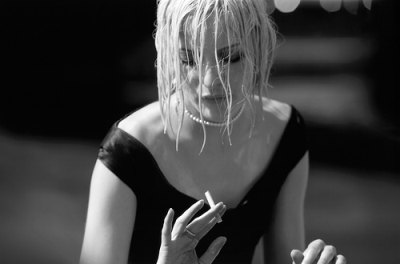 Six years after his supposedly final project The Messenger: The Story of Joan of Arc (1999) French director Luc Besson returns with a classic romantic picture that many may find suspiciously similar to Patrice Leconte's La Fille sur le Pont a.k.a Girl on the Bridge (1999). Both films begin their stories on a bridge in Paris, both films feature wannabe suicide-killers soon-to-become lovers, both films are shot in glorious black and white.

However while Leconte found Istanbul to be the perfect location to put an end on the romance between Vanessa Paradis and Daniel Auteuil in Angel-A the two protagonists remain in Paris. Here they engage in a classic battle against evil leading to a spectacular finale with more than a few genuine laughs.

Not a fan of Besson's work, both as a director and producer, Angel-A certainly had me entertained! The picture's honest exploration of a relationship which seems unlikely to say the least follows a tricky path but ultimately succeeds in what it sets out to accomplish. French superstar Jamel Debbouze quickly takes over the film with his enormous range of hilarious facial expressions complimented by a zesty street lingo while beautiful Danish actress Ria Rasmussen manages to keep the feisty but laughably naïve brutes at bay.

Special mention also goes to Thierry Arbogast (The Fifth Element) whose spellbindingly beautiful take on Paris is arguably Angel-A's strongest asset - the black and white cinematography is every bit as impressive as it is the film's editing.

Finally, a friendly note of caution goes to those who may find the dialog in Angel-A a tiny bit "simplified" in English where obviously the main protagonists appear engaged in a lengthy game of words: keep a close eye on that white text on your screens! It pays off when it matters the most!! 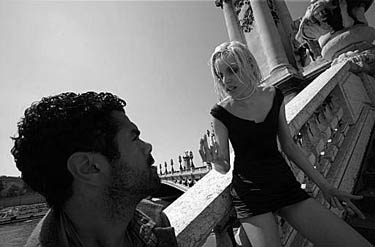 Presented in its original aspect ratio of 2.35:1 and enhanced for widescreen TV's the print provided by Optimum Entertainment sparkles!! Lush black and white colors overflow in a beautiful panorama of images untouched by damage marks or intrusive dots. Near-perfect contrast, lack of disturbing edge-enhancement, and a tight to the frame image is what the British distribs have provided. Quite frankly I could not spot a single issue with this DVD worthy of discussion here. A top-notch transfer just as the film requires it!! PAL-encoded, Region 2.

Presented with a French 2.0 and 5.1 mixes the film sounds quite different when using either one of these. I made sure to listen to both of them and there is something very unusual in the way the audio is mixed: the 2.0 track is very basic, at times offering a bit of an echo-effect which is to say the least curious. Yet, the 5.1 track is much more active with great separation of the rears and ultimately better sounding as far as I am concerned. Especially when it comes to addressing the soundtrack the 5.1 mix is undoubtedly the one to listen to. With optional English subtitles (and it must be noted that they are extremely well done considering the film's tricky use of slang).

There are a number of extras on this disc which obviously have been ported straight from the French Studio Canal release. First there is the "Making of Angel-A" where various behind the scenes footage has been compiled to provide a look at the work of the cast and crew while "in production". This isn't a mandatory piece of supplemental material but certainly is one that gives a bit of Angel-A's magic away. Next, there is the "Making of the Music" where Anja Garbarek is seen working behind the mix desk directing the orchestration of the soundtrack. Finally, you will also find the original Music Video for the film as well as the French theatrical trailer.

Beautifully shot with exceptionally strong performances by Jamel Debbouze and Rie Rasmussen Angel-A is a simple film with a heart. The glorious black and white cinematography provides a classy touch to an already impressive array of vistas from the City of Lights. The Optimum disc carries the exact print distributed by Studio Canal in France and this says a lot: the quality is simply stunning!!


This review was made possible with the kind assistance of Xploited Cinema.