BCI Eclipse // Unrated // May 22, 2007
List Price: $24.98 [Buy now and save at Amazon]
Review by Paul Mavis | posted May 18, 2007 | E-mail the Author
Yikes. Last week, I had a lot of fun revisiting Mission: Magic!, the Filmation Studios' funky animated classic from 1973, starring future recording star Rick Springfield. Unfortunately, I can't say I had the same experience watching Filmation's Hero High: The Complete Series. Isolating all 26 Hero High short cartoons from their host show The Kids Super Power Hour with Shazam! makes little sense as far as fans of the original show are concerned, and only serves to emphasize the relatively poor quality of these cheaply animated and generally poorly constructed shows. 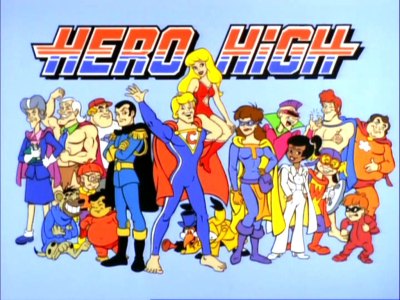 The Kids Super Power Hour with Shazam! debuted in the fall of 1981 on NBC. Conceived as a live-action showcase for a cast of young performers dressed as superheroes who sang and told jokes to a live studio audience full of kids, The Kids Super Power Hour with Shazam! featured short animated cartoons of Shazam!, based on the DC Comics character, and Hero High. Hero High featured a cast of teenagers with extraordinary super powers attending a high school designed for their particular talents. Main characters included Captain California, who rode a super surfboard named Wipeout, Glorious Gal, who had super strength and who could fly, Misty Magic, a beautiful magician, Punk Rock, a shades-wearing, Mohawk-sporting guitarist who could shatter glass with his voice or instrument, Dirty Trixie (I kid you not), who could fly and who had a ton of dirty tricks devices, Weatherman, who could control the weather, and Rex Ruthless, the "villain" of the show who's an egomaniac and troublemaker.

Running either eight and a half or twelve and a half minutes, the cartoon Hero High segments rarely rise above the most primitive Saturday morning kids fare. Lacking the funky Filmation house style that enlivened so many of their earlier fun series (like Fat Albert and The Cosby Kids and The Brady Kids), the Hero High cartoons have a boring, generic look that does little to distinguish them as true Filmation products. Originally conceived as an Archies superhero show (the rights fell through), producer Lou Scheimer simply created his own superhero characters, but they fail to make much of an impression, particularly since the scripts are frequently inane. As well, there's a lot of repetition in using the same animation sequences from show to show - something that Filmation was roundly criticized for by animation buffs. But most seriously, these little shorts just aren't that funny. At least the older Filmation series had the timing down right for the slapstick and the corny old jokes, but sadly, here at Hero High, there's precious little evidence of the old Filmation moxie (criminally, even the celebrated Filmation laugh track is missing). 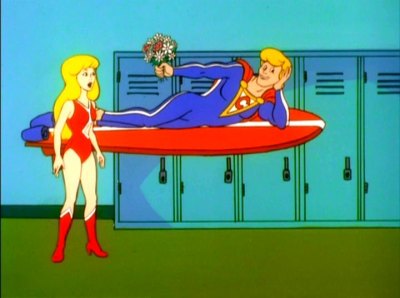 Of course, none of this would have mattered in the slightest, had Entertainment Rights and Ink & Paint released the complete The Kids Super Power Hour with Shazam! shows, with the cartoons integrated back into the episodes. While The Kids Super Power Hour with Shazam! came out after I had quit watching Saturday morning cartoons (my Saturdays in 1981 were filled with my first part-time job), I do remember the occasional stray glimpse at the show - and with good reason. There's a character on the live-action portion of the show, Glorious Gal, played by actress Becky Perle, who was one of the best looking girls on TV at the time (back when TV rarely if ever showed girls in skimpy costumes). So other than a few fond memories of teenage infatuation, I don't really have a strong connection with the show. But I do know what vintage TV fans want in a DVD set - they want the complete episodes, not just parts of them.

The Kids Super Power Hour with Shazam! was Filmation's attempt to mimic Sid and Marty Krofft, and while it didn't have the patented Krofft outrageousness (where are the feathers, balloons, ice skating rink, and puppets?), it probably does have a kitschy appeal to the young kids who grew up on the superheroes' songs and ancient jokes. So why didn't they just put out that show in its entirety, instead of isolating the weakest element of the series: the Hero High segments? Evidently, the Hero High cartoons were later syndicated as a half-hour show in their own right, but it's hard to tell who would have enjoyed them without the benefit of The Kids Super Power Hour with Shazam!. Perhaps it's a matter of rights acquisition (although two live-action wrappers are included here on the DVD -without the Shazam! cartoons, unfortunately), but the missing The Kids Super Power Hour with Shazam! footage definitely puts the Hero High: The Complete Series shorts in a lesser light. 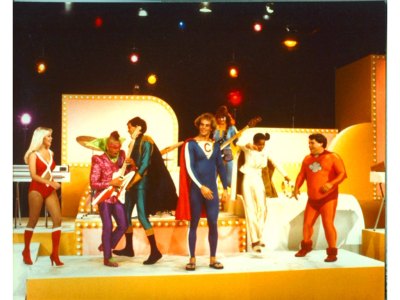 Here are the 26, eight and a half or twelve and a half minute episodes of the two-disc box set, Hero High: The Complete Series, as described on the trivia-packed booklet included in the set:


Boo Who
When the kids go to a haunted house, they find scares around every dark corner and behind every creaking door!

Starfire, Where Are You?
After a top-secret shuttle named "Starfire" is stolen, the Hero High kids go into action to return it safely.

The Art of Ballot
Showing that girls can be just as good as boys, Glorious Gal runs against Captain California in the school election. Let the battle of the sexes begin!

The Captives
Two jewel thieves hiding in the mountains take Misty Magic and AWOL captive, and the others must come to their rescue.

Do the Computer Stomp
The big dance is coming up at Hero High, and the new computer will decide which couples get paired off, leading to hilariously unpredictable results!

A Fistful of Knuckles
The Hero High students accidentally help a criminal get out of jail, and they must team up with Captain Marvel to return the evil-doers to justice. Shazam!

Rat Finx Rex
Rex is assigned to be the new Hero High Honor Guard, but the power goes to his head, and he begins to drive the students and faculty crazy!

High Rise Hijinx
A valuable statue is being hidden in a penthouse apartment, and the Hero High kids must rescue it from some thieves.

Off Her Rocker
After Misty messes up a trick, the others make fun of her. A short while later, Misty disappears completely! Where has she gone?

A Clone of His Own
When Police Chief Hardy is replaced by a clone controlled by criminals, the Hero High kids must find a way to save their friend before the clone can cause too much trouble.

Follow the Litter
Rex and Trixie play dirty when the other students begin a campaign to clean up Hero High.

Game of Chance
At the carnival, the Hero High kids discover that the games are rigged, and uncover a diamond smuggling operation!

Malt Shop Mayhem
As part of their training, the kids are given jobs. Glorious Gal and others are soon working at their favorite Malt Shop, but things don't go as planned.

The Umpire Strikes Back
Chief Hardy traps a spy at the baseball stadium, but the crafty crook masquerades as the umpire to get away. Good thing that the Hero High kids are enjoying the game!


The Not So Great Outdoors
On their way to a football game, the Hero High kids are on a bus that breaks down in the "great outdoors." Forced to spend a night under the stars, the super teens find surprises galore!

Track Race
The governor is riding on the new high-speed train when a saboteur sends the locomotive on a fast course to disaster...unless the Hero High kids intervene in time.

Cover Twirl
When super-heroine Isis comes to Hero High for the day, Captain California is in love. Complications ensue when Glorious Gal tries to keep Cap's heart away from the older woman.

The Human Fly
The tiny thief known as the Human Fly has big plans to steal "The Tiger's Eye" emerald from the museum, unless the Hero High team can swat him!

My Job is Yours
Chaos ensues when the Hero High students get to take over the school for one day!

The Big Bang Theory
The Big Brain and his partner Tiny have some explosive plans for a munitions factory and bank vaults, unless the students from Hero High can out-think them! 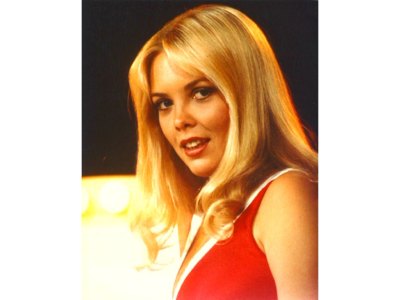 The Video:
Unlike the recent Mission: Magic! DVD release, the full screen video image of Hero High: The Complete Series is quite good, with solid, bright colors, no contrasty wash-outs, and a clear, focused image (at least during the animated shorts -- the live action wrappers are discussed in the Extras section).

The Audio:
The Dolby Digital English 2.0 stereo mix is clear and strong. There's an optional Spanish language track for the episodes.

The Extras:
There are quite a few fun extras on Hero High: The Complete Series. First, there's commentary from producer Lou Scheimer, actors John Berwick and Johnny Venakur, hosted by Andy Mangels, for episode A Fistful of Knuckles. As well, the group discusses the live-action wrappers for The Kids Super Power Hour with Shazam!. This discussion, though, is cut short, so only a few minutes of commentary are available here. Two shows worth of live action wrappers are included, also, with complete opening credits, commercial bumpers and the final credits -- but without the integrated cartoons. It's fun to see what this DVD box set could have looked like, had they released the entire, complete shows instead of just the Hero High cartoons. The video quality of these wraparounds is pretty poor, however. There are fun, informative interviews (almost an hour's worth) with John Berwick, Johnny Venokur, Lou Schiemer, writers Tom Ruegger and Robby London, and storyboard artists Michael Swanigan and Darrell McNeil. There's an Art and Photo gallery, which included character guide art sheets, promotional photos, and cast reunion pictures. DVD-ROM features include 12 scripts for Hero High, plus four sets of storyboards. As well, there are trailers for other Ink & Paint titles.