BCI Eclipse // Unrated // May 8, 2007
List Price: $29.98 [Buy now and save at Amazon]
Review by Stuart Galbraith IV | posted May 30, 2007 | E-mail the Author
A sequel, of sorts, to Filmation's Space Academy, Jason of Star Command (1978-80) was by Saturday morning kids' programming standards an unusually ambitious production. A throwback to the Republic and Columbia sci-fi serials of the 1940s and early '50s (Radar Men from the Moon, Captain Video), Jason audaciously aimed for a Star Wars-scale grandeur with state-of-the-art visual effects on a meager budget of something like $100,000 an episode. Aimed at kids, the series shouldn't be faulted for being more than a trifle silly - Solaris it's not - or that it trying to do so much with so little money, the result was often cheesy even by 1978 standards. As with many of Filmation's other shows (Fat Albert & the Cosby Kids, the animated Star Trek, and Flash Gordon), Jason aims much higher than, say, rivals Hanna-Barbera and Sid & Marty Krofft. Where most of those companies' shows are unwatachable today, Filmation's best programs are still a lot of fun. 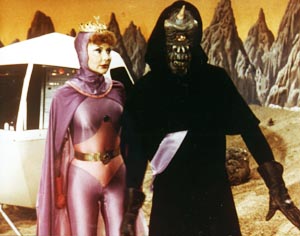 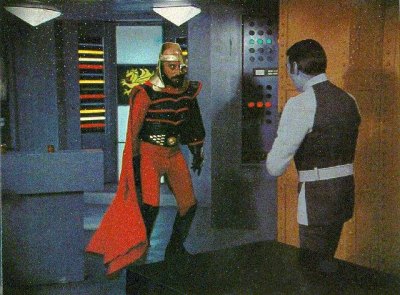 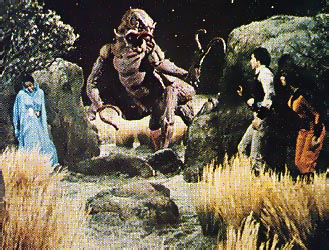 Jason (Craig Littler) is the very Han Solo-esque hero of Star Command, a subsection of Space Academy, who battles the evil Dragos (Sid Haig), a would-be "Master of the Cosmos" bent on destruction, who threatens Space Academy with his Dragonship, an odd-shaped vessel apparently carved out of an asteroid and which schematically resembles Forbidden Planet's Monster from the Id. Aiding Jason in his battles with Dragos is perky computer expert Capt. Nicole Davidoff (Susan O'Hanlon [Pratt]), scientific genius Professor E.J. Parsafoot (Charlie Dell), Commander Canarvin (James Doohan, "Scotty" from TV's Star Trek, in a role intended for Jonathan Harris), and a little flying robot, W1K1, better known as "Wiki." Wiki beeps incessantly like R2-D2 and looks like a customized wind-up toy, which it might very well have been.

The series began airing as 15-minute segments of a much larger, 90-minute anthology called Tarzan and the Super 7 which, in addition to an animated version of Edgar Rice Burroughs' character, featured the likes of Batman and Robin, Hercules, Sinbad, and Merlin the Magician. Episodes were patterned closely after the escape-recapture formula of the theatrical chapter plays of the '40s and early '50s, with each episode ending with a cliffhanger and its 16 episodes telling one giant serial-style story.

In its second year, Jason of Star Command broke away from the Super 7, landing its own 30-minute series (resulting in 12 more episodes), with these shows telling one story every three-to-four episodes. By this time, Jimmy Doohan was off filming Star Trek - The Motion Picture (1979) and was replaced by actor John Russell's blue-faced alien Commander. (If Wyatt Earp had joined The Blue Man Group, he would've looked something like Russell's Commander.) Also in season two O'Hanlon was replaced by the exotically beautiful Samantha (blaxploitation star Tamara Dobson).

Considering its modest budget, the series offers a lot for the money. Shot entirely on film, the visual effects involving the spaceships are pretty good, and there's even some very impressive stop-motion animation several notches above the rudimentary dinosaurs featured in the Krofft's Land of the Lost. Some of the miniatures, sets, and Peepo, the robot from Space Academy are recycled from that series.

The scripts, the lion's share of which were written by Samuel A. Peebles (Star Trek's "Where No Man Has Gone Before"), are on a serial level with trivial matters like scientific fact and storytelling logic frequently abandoned in the name of budgetary restrictions and narrative expediency. Characters step out of their spacecraft without the aid of spacesuits or oxygen, and sometimes simply float down to planets they want to explore. But to complain about such things is beside the point; you either watch such shows on their own level or not at all. Serial fans will probably enjoy this, and only the most jaded small fry will dislike it. Editor-turned producer-director Arthur H. Nadel (The Rifleman) directed the entire run of shows.

Guest stars include Rosanne Katon (then appearing as Playboy's "Playmate of the Month," which raised a few eyebrows), Julie Newmar, Angelo Rossitto, and Francine York (Lost in Space).

Jason of Star Command is presented in its original full frame format in an okay transfer. The show was apparently shot in 35mm but the transfer leans on the soft side with unimpressive though adequate color and clarity. The series is spread over three single-sided discs. An alternate Spanish audio track is provided, though no subtitles. The 15-minute shows are retained in that format, though odd-numbered shows include opening titles but no end credits, while even-numbered episodes offer the latter, suggesting that these shows were culled from versions that had been re-cut to fit 30-minute time slots.

The highlight among the supplements is The Adventures of Jason of Star Command, a fairly good 33-minute documentary about the series in 4:3 matted format (why?). Producer Lou Scheimer, actors Craig Littler and John Berwick, and special effects guys Chuck Comisky (SPFX Supervisor), Jim Aupperle (stop-motion), and John Carl Beuchler (live-action creature effects) talk nostalgically about the show, and all turn up in various audio commentary tracks hosted by Andy Mangels, who wrote and directed the featurette.

Like other Filmation live-action series, Jason of Star Command is surprisingly good for what it is, though beyond its nostalgia value will still primarily appeal to kids. BCI has done a nice job packaging the series, which is Recommended.