One of the best selling sets for both next generation HD formats has been The Planet Earth, a documentary series from the BBC.  The reason that this has sold so well is that the show is both visually stunning and thoroughly captivating.  Filled with images of animals and nature that have never been shown before, this is a unique look at our planet.  The Blu-ray presentation is simply gorgeous with a picture that just jumps off the screen. 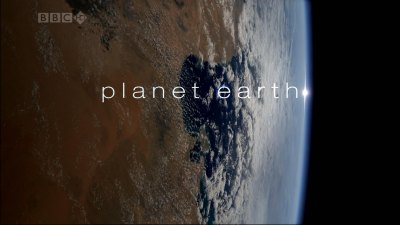 One of the most (if not the most) expensive nature shows ever produced, The Planet Earth had a budget of approximately $25 million.  It was filmed over a five year period and utilized over 200 locations in 62 countries.  While those figures are impressive, they don't begin to prepare viewers for the amazing sights that are contained in each episode.  This is really a ground breaking series, since it utilizes technology that hadn't been previously used in shows about animal life and the environment.  Not only was the series filmed in high definition, but they employed a new camera system that was able to let them do things filmmakers couldn't do in the past.  This system could be mounted on the bottom of a helicopter and still obtain a still, non-jerky image.  Very powerful lenses were used too, allowing the creators to get crystal clear close-ups from a very long distance away. 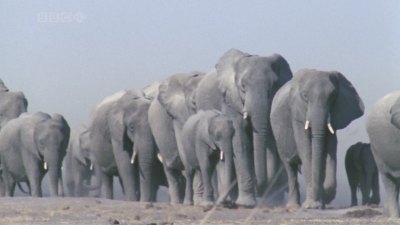 In just about every nature show about Africa you'll see an aerial shot of a herd of Wildebeest thundering across the plains.  This is because once the helicopter came near the animals, they became startled and ran.  That doesn't happen in this series. With their advanced camera set up, the creators could fly high enough so that the animals on the ground didn't even know they were there.  This is a key part of the show.  For the first time (in many cases) viewers can see animals acting totally candidly.

Narrated by Sir David Attenborough, each of the eleven episodes in this series takes a look at another ecosystem or area.  From the peaks of the tallest mountains to the depths of the oceans, from pole to pole and even into the interior of the planet, there is seemingly no type of wilderness that is left unphotographed.  Every episode is filled with amazing scenes of the local flora and fauna living out their lives, and interesting facts about the habitat being examined. 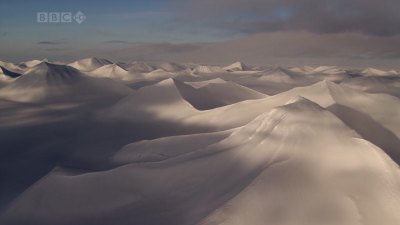 This series is all about stunning images.  Viewers get to see the rare Snow Leopard (with only 40 estimated to be living in the wild) hunting in the Himalayas, running down-hill across rocky, near vertical, terrain in pursuit of a mountain goat.   I can't imagine slowly climbing down that land, much less running full bore, leaping over rocks and landing gracefully on boulders.  The migration of caribou is nearly as impressive.  As the camera, focused on a small group, pulls out farther and farther the herd goes from large to huge to gigantic to amazing.  Three million animals travel together each year, and to see it up close and personal is remarkable.

The only thing against the show is its lack of depth.  While every episode looks at one type of environment, none of them are really looked at closely.  This isn't an examination of any one topic, but an overview of many.  There were times where some more detail and background information would have been welcome.  This is a minor complaint though, since the information the show does give is so engaging and visually moving.

I would be remiss if I didn't note a word of warning about this series.  It is about nature, and life in the wild can be violent and short.  Animals die and many of them are eaten by predators.  One of the most amazing shots in a series filled with amazing shots contains seals swimming in the sea.  All of a sudden a large seal will disappear inside the mouth of a Great White Shark that leaps out of the water, swallowing its prey whole.  There are sad parts too, such as the baby elephant that loses his mother in a sand storm while crossing the Gobi.  The young thing was smart enough to follow his mother's footprints, but he follows them the wrong way, and slowly walks deeper into the desert and certain death.  This isn't the focus of the series, and these parts are in the minority.  And while none of the scenes are overly bloody or gruesome, young and sensitive children may be affected by these scenes.


These 11 episodes, about 50-minutes in length each, come on four 25GB Blu-ray discs.  These are housed in a double width case that holds a disc on the front and back of the case, and the remaining two discs are held on a page that is attached to the spine of the case.   (One on each side of the page.)  This in turn is housed in a nice, sturdy slipcase which has the same cover art as the disc case itself.  All in all an attractive set. 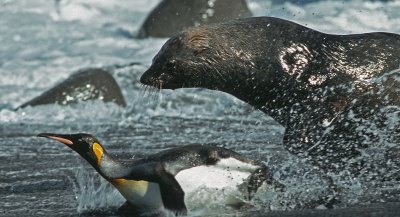 These discs were mastered in 1080p and the image looks simply amazing.  If you want to show some guests just why you spent all of that money on a Blu-ray player and HD display, just throw this puppy in and watch their eyes pop out.  The level of detail is excellent, with individual drops of water being easy to discern when a whale exhales from its blow-hole.  The colors are also stunning; they are bright, solid, and just pop off the screen.  From the radiance of an endless field of wild flowers to the bright feathers of the Bird of Paradise, this set really brings forth all of the hues in glorious brilliance.  Likewise the undersea shots and low light images (such as winter in the Antarctic) are clear and detailed with a wide range of gray tones.

The only problem I could find was a very slight amount of posterization in some of the low light sequences, but this was very minor and I doubt that many people would even notice it if they weren't specifically looking for it.  It's almost not worth mentioning.  Other digital defects, mosquito noise, aliasing, and macro blocking are not a concern what so ever.  This is an excellent looking set that is sure to please the most discriminating viewers.

This set come with a DD 5.1 track in English and there are optional subtitles in English, French, and Spanish.  While the picture is incredibly impressive, the audio is only very good.  It is appropriate for the show, but isn't as flashy or striking as the video.  While the narration is centered on the screen, there are some parts where the room just fills with the sounds of nature.  The whale songs in one episode are a good example, totally immersing the viewer in the sights and sounds of the underwater world.  Unfortunately this technique isn't utilized as often as it could be, for most of the audio is constrained to the front sound stage.

The lack of a lossless audio track is another strike against the discs, though the DD 5.1 doesn't have any noticeable defects or imperfections.

The only disappointing thing about this lovely set is the lack of bonus features.  Like the HD DVD version, this Blu-ray set has no added content.  The SD DVD set includes a 10-minute behind the scenes short for each episode which is missing from this BD set.  Standard def DVD buyers also get a fifth disc which includes three full length documentaries that act as an epilog to the series.  That is nowhere to be seen in this BD set.  This is a real blunder.  If the studios ever want Joe Six Pack to invest in HD technology, they have to convince him that he's really missing something, namely a much improved picture and better sound.  The DVD revolution illustrated that people were willing to purchase new technology if the advantages are big enough.  By removing bonus material from HD discs they are just shooting themselves in the foot.

This is one amazing series.  I've seen my share of wilderness shows in my time and I can safely say that this is the most impressive one, hands down.  With jaw-dropping scenes, remarkable (while not being dreary) information and compelling narration, Planet Earth is a show that is a joy to watch.  This Blu-ray set is reference quality, with a picture that is so brilliant and detailed that it is going to be hard to beat.  The only qualm is that this set doesn't port over all the bonus material from the SD version of the show.  If it wasn't for that, this would have been a home run.  Highly Recommended.