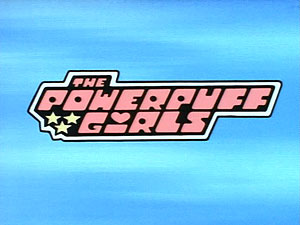 
The Story So Far
Professor Nutronium's efforts to create the perfect little girl took an odd turn when he accidentally added Chemical X to the mix. The result is a trio of superpowered kids: Blossom, the leader; Buttercup, the brawler; and Bubbles, the cute one. The Girls use their powers to defend their home city of Townsville against monsters and villains, while learning a few life lessons as well. The show ran for 78 episodes on Cartoon Network and has had four mish-mash DVD releases, along with a theatrical movie and a holiday special. DVDTalk has reviews of most of these: Down 'N' Dirty | Powerpuff Bluff | Meet the Beat-Alls | The Powerpuff Girls Movie | 'Twas the Fight Before Christmas

The Show
When I was a younger man, and I first came across "The Powerpuff Girls," my interest wasn't something to be proud of. What was this adult male doing enjoying a candy colored cartoon about kindergarten-aged girls, in these days before [adult swim] and hipster irony? But I watched the hell out of it, before my interest slowly waned and the series slid off my radar (along with everyone else's, it seems.)

In diving into this show once again, it hit me how enjoyable the show is, packing a little bit of everything that's fun and entertaining into a show you feel comfortable watching with the kids. Sure, there's over-the-top violence, but it's done with such style, and just plain cuteness, that it takes on a tone not unlike the old Bugs Bunny cartoons (you know...the ones you can't see anymore.) It's all in god fun, with clearly defined good versus evil struggles.

But despite all the stuff for the kiddies, there's just as much in this uniquely artsy cartoon for adults to enjoy, starting with the visual style, which combines retro kitsch sensibilities with touches of Japanese anime, Bob Clampett and John Kricfalusi. Emmy-nominated gem "Bare Facts" uses three different art styles, in addition to the show's standard look, to visually depict the amusing Rashomon-like tale, including a gritty Frank Miller-esque segment that really sells the action. 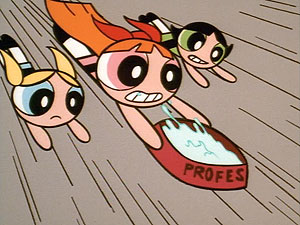 The art will draw older viewers in, but the writing is where the series earns its fans. Between the silly gags and cutesy moments with the girls, there's a plethora of material that flies well over the heads of the kids watching. Fun references, interesting villains and pop-culture parodies fill every episode with plenty of good stuff that doesn't distract from its intended goal of entertaining children. Its not an easy line to walk, and few series have ever done it this well.

This collection includes the first 13 shows, or 24 episodes, as all but two of the shows have two separate stories. Of the 24 episodes, nine are making their first appearance on DVD, including the double-length "Rowdyruff Boys," which sees evil monkey Mojo Jojo (who, despite being a villain, is one of the series' most enjoyable characters) create male counterparts to the Girls. It's also the first time "Paste Makes Waste," the creepy story of Elmer the Paste Eater, makes it to disc, as well as "Octi Evil," which introduced Him, the cross-dressing, androgynous personification of evil that certainly gave more than a few kids nightmares. Him's appearance in "Tough Love" also makes its DVD debut here, making this a treat for fans of the series.

Though the newly-released episodes are great to have, the best of the bunch is the show that pairs the aforementioned "Bare Facts," a cleverly-told story that uses plenty of visual tricks to create a near-perfect episode, with "Bubblevicious," the single greatest Bubbles-focused episode. The most innocent of the three Powerpuffs, Bubbles is treated like a baby by the Professor and her sisters, and is tired of it. Harnessing her annoyance, she becomes "hardcore" and, fueled by rage, goes on a rampage that earns her a bit of respect. Together, they form one of the most enjoyable shows the series has to offer and an example of just what the Powerpuff Girls did best. 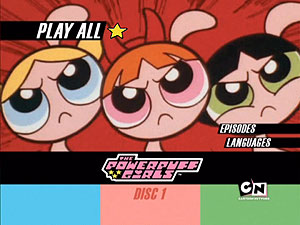 The DVDs
The 13 shows, presented in production order, are spread over two DVDs, with eight shows on the first disc, and five on the second, along with the extras. The discs come in a slipcased two-tray digipak, with an episode listing and a note from creator Craig McCracken, and a cute art spread that integrates with the disc art. The DVDs feature a full-frame static menu with options to play all the shows, select individual shows and adjust languages. Audio options include English, French and Spanish, while subtitles are available in English, French and Spanish, along with closed captioning.

The Quality
This is a mixed bag, as the series shows its age, as the color is a bit dull, though solid, jitters can be seen in some scenes and there's a good deal of video noise throughout the season. The clarity of these full-frame transfer can't be denied, but it reveals many of the flaws inherit in the animation, like inconsistent black levels, and paint that can be seen under other colors. Dirt and damage can be noticed occasionally, and some pixilation is evident on thin black lines, but for the most part it looks decent, at the least better than it did on TV.

The audio, delivered as a Dolby Digital 2.0 track, is very strong, with some interesting separation between the speakers, clear dialogue and very nice sound effects.

The Extras
The extras start with three "pilot" episodes, including McCracken's original college short, "The Whoopass Girls: A Sticky Situation!" This one is presented in it's finished version as well as in pencil tests, but unfortunately not with the video intro and commentary that was on the "Mane Event" DVD. There's also "Meat Fuzzy Lumkins" and "Crime 101," the pilots created to pitch the series. These are decent, but they don't have the same feel as the series. Three sets of animatics, with audio tracks, are available for additional "Whoopass Girls" episodes, including "Monkey See, Doggie Do," which eventually became an actual episode.

A vintage CNN piece looks at the original animation efforts at Cartoon Network, with interviews with McCracken and other young animators. These old news pieces tend to be fun, and this peek back at hand-drawn animation is. It's followed by the "World Premiere Toon In" episode of "Space Ghost Coast to Coast," which introduced the Powerpuff Girls, Johnny Bravo and other series, which is another fun bit of nostalgia. The raw interview footage of McCracken is included, to give you an idea of how the show's odd interviews are done.

The extras wrap up with a collection of promos, 16 in all. 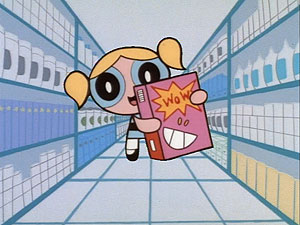 The Bottom Line
Having not watched these episodes in a long time, getting back into the show was a definite joy, as the stories still hold up well, and the show's animation remains fresh. The shows look their age unfortunately, but they sound great. Since this set is labeled as a "Collector's Edition" and Warner Brothers announced there would be audio commentary, "challenged" and a music video, my expectations were high for some good bonus material, but those expectations were not met, and there's even some content missing from previous DVD releases. Fans of the show will want to own these episodes, which is a reason to upgrade from the previous releases, but this is certainly not a collector's edition DVD and certainly not what was hoped for when the set was announced. Consider this a missed opportunity at best.