Darren Aronofsky makes films that you'll either love or hate, there's little middle ground.  Breaking on the scene with the thought provoking Pi (1998) he followed that up with the graphic Requiem for a Dream (2000) which earned star Ellen Burstyn an Academy Award nomination.  He was pretty quiet for a while after that.  He started a project, had the plug pulled after the star walked off, rewrote the script, and eventually securing more financing and acting talent.  The result was 2006's The Fountain, a film, like Aronofsky's first two movies, that is a bit opaque and hard to grasp.  If the effort is made to decipher the clues and understand the themes that are woven through the movie however, viewers will be rewarded with an intelligent and entertaining movie that is visually stunning. 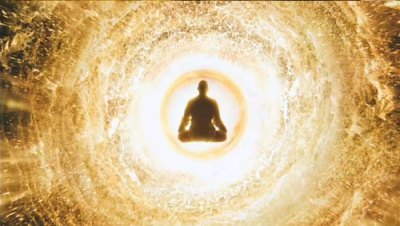 Told through three stories, all taking place in different times, this is a tale of love, desire, and the search for immortality.  The first story, chronologically, involves Tomas (Hugh Jackman) a Spanish Conquistador who has traveled to present day Mexico in search of the Tree of Life, the only thing that can save his country and the Queen (Rachel Weisz) he loves.

In the present day, a research doctor, Dr. Tom Creo, (Hugh Jackman again) works tirelessly in order to discover a cure for a certain type of brain tumor.  After having a flash of inspiration, he tries an extract from some tree bark that was discovered in Central America.  In monkeys the serum reverses the ageing process, but he could care less.  He needs to find a cure for this brain growth before his wife (Rachel Weisz) dies.

In the final story, taking place sometime in the future, a lonely monk (Hugh Jackman) is traveling through space in a bubble with a large, dying tree.  He's taking it to a nebula where he hopes it will be reborn. 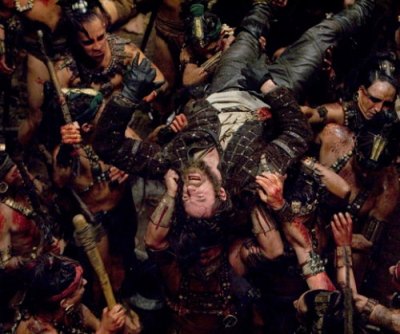 These three stories, intertwined like a vine growing on a tree, all tell the same tale, of a man desperately trying to save the thing he loves.  This is a complex, philosophical film which looks at the nature of love and loss, and how you can lose sight of what you want while trying to get the gold ring.  While occasionally the film becomes a little too overt delivering its MESSAGE, especially at the end, it is generally subtle.  The film takes its time and unveils its meaning slowly and with deliberate purpose.

There is a lot in this movie, and it would undoubtedly hold up well to multiple viewings.  There are many themes and much visual symbolism that run through the film, some of them fairly subtle, which would become more apparent on repeated viewings.  One of the themes was how trees are illustrated throughout the movie.  When Tomas talks to Queen Isabella, she's standing behind a beautifully carved gate of intertwined branches, and when she moves in front of it for the first time viewers can tell that her gown is covered with a design that resembles the roots of a tree.  In the future tale, Tommy keeps track of how long he's been traveling by tattooing lines that encircle his arms, just like the rings of a tree.  The film is filled with underlying details like this, (my favorite is how the movie goes from dark sets to bright light as the story progresses, illustrating the character's intellectual awakening) and that makes it a rich source of things to think about and discuss with friends.

In addition to the multilayered story and thoughtful direction, the movie has a strong cast.  Hugh Jackman is revealed as a powerful actor who is destined for great things.  While he was fine in the X-Men movies (and okay in Van Helsing,) I was surprised at the depth and strength of his performance.  Playing a triple role can't be easy, and he managed to make each of his three characters seem like different and distinct people but with similar traits and personalities. 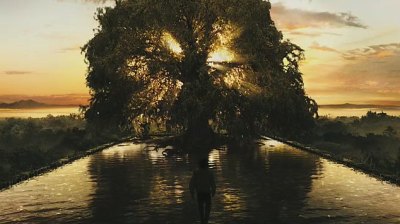 The 1.85:1 image is about standard for the recent BR releases, which is to say it looks very good with only a few defects.  This is actually one disc that is hard to judge the video quality since the movie intentionally has some very soft scenes and overly bright images where the light washes out details.  One of the themes of the movie is Thomas' journey from darkness into light.  The film starts out very dark with lots of detail obscuring shadows but as it progresses the images have more and more light, and in a couple of scenes, as I mentioned, this washes out many of the details.  This is what the director and DP were trying to achieve and the disc reproduces those effects well.

There are some scenes that pop off the screen with incredible detail.  Many of the future scenes with the tree traveling through space are magnificent looking.  The jungles of "New Spain" are green and lush and look like you could reach into your television and touch the plants.  The picture has a slight green push during the story that takes place in the past, but this was most probably intentional.  Other scenes are not as vivid however.  The hospital scenes, while being reproduced well, tend to look a little flat and lifeless.  The level of detail is generally good too, though some of the scenes could have a little more fine detail.  Those are the exception however, and some sequences, such as where Tomas meets the Queen are stunning in their intensity.

On the digital side things look very good.  There was a touch of mosquito noise in a very few scenes, and one or two instances of light posterization, but these defects were rare.  Overall this was a very nice looking disc.  Since this is such a visually dynamic film, I'd strongly recommend that anyone thinking about a purchase spring for the BD copy.  I'm sure the added detail makes the movie much more enjoyable.

This film comes with a 5.1 DD soundtrack as well as a French dub, also in DD 5.1.  It is obvious that director Darren Aronofsky paid as much attention to the aural aspects of this film as he did to the visuals.  The soundtrack is very impressive.  Like the video, there isn't just one style of mixing employed here; some of the scenes have multiple layers of dialog piled one on top of the other, sometimes the things people are saying dominating the mix, while in other parts of the movie the whispers are competing with ambient noises.  All of these different styles come through loud and clear, (though there are some parts that are intentionally muddled and hard to discern.)  The full soundstage is used to very good effect too.  While there aren't many fancy front-to-back pans where a sound bounces around the room, the movie does put viewers in the middle of the action with its excellent use of the surrounds and subwoofer.  Localization is very good and the dynamic range is just fine.  I do wish that a lossless PCM track was included, but you can't have everything.  There are subtitles in English, French, and Spanish.

This disc has a nice selection of bonus material, but it does feel like there could be more.  There is no director's commentary for starters, but the 6 ton elephant in the room, as far as the bonus material goes, is the fact that the original version of the movie is barely mentioned.1  I would have been interested too hear about the differences in the script, what Brad Pitt didn't like about the original, and how the decreased budget affected the story itself.  None of this is addressed unfortunately.

The meat of the extras is the hour + featurette Inside The Fountain:  Death and Rebirth.  This is video diary-type feature which is split into six sections (there is a 'play all' button) and covers various parts of production.  The first part does mention the original version of the film and shows some behind the scenes shots on location in Australia and they show when Aronofsky told everyone that production was halted, but they never explained why or gave many details at all.  The other sections deal with restarting the project and each of the three time periods, editing, music, etc.  The behind the scenes sections were intercut with interviews with the crew and it was pretty interesting overall, though it did drag in parts.

The Interview is a 12-minute discussion with Hugh Jackman about the film and philosophy.  I wasn't too enthralled by this piece, but those who are interested in Jackman's outlook on life will eat it up.  Inside the Director's Mind is a 16-minute reel of storyboard-to-film comparisons (in black and white) which quickly grew old.  Step by Step is a look at how the special effects were created, one step at a time, and the Peter Parks Bonus - Macro Photography Loop is basically a screen saver with some nice images set to music.  There is also a theatrical trailer.

Though it took years to get to the screen, The Fountain was worth the wait.  A fine film, this is a show that people who like looking for hidden symbolism and piecing together the meanings of seemingly unrelated events will enjoy.  If you're looking for a straight forward narrative or a film with a lot of action you should pass this one by.  But if you're looking for a movie that doesn't talk down to the audience and is a bit opaque at times in additon to being visually stunning, this would be one to check out.  Recommended.

1)  The film first went into production in 2002 with Brad Pitt and Cate Blanchett in the lead roles, ans with a $75 million budget.  After large sets were built and much of the preproduction completed, Pitt and Aronofsky had irreconsilable creative differences and Pitt left the project.  Without the big name star, the studio pulled the funding and the production stopped.  After that Aronofsky rewrote the script over the period of a couple of years and eventually acquired more funding (though this version only has half the budget of the original production) and two name stars.