Fox // Unrated // June 19, 2007
List Price: $59.98 [Buy now and save at Amazon]
Review by Stuart Galbraith IV | posted June 27, 2007 | E-mail the Author
The fondly remembered cult "dramedy" Picket Fences (1992-96) was the first television series writer-producer David E. Kelley created on his own (he co-created Doogie Howser, M.D. with mentor Steven Bochco, and had written for Bochco's L.A. Law before that), and it bears his unmistakable, original stamp. Many of the innovations that first appeared on Picket Fences would turn up again on his more famous shows - Ally McBeal, The Practice, Boston Legal - but Picket Fences was the first, and 15 years later the show holds up exceedingly well. 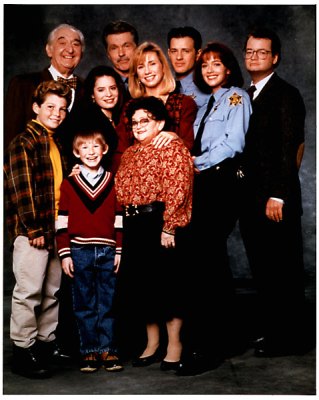 At the same time the show is a crime/legal-medical drama/black comedy, with an equal part of the program spent at Jimmy's small police department where officers Kenny Lacos (Costas Mandylor) and Maxine Stewart (Lauren Holly) also work. Kenny's cautious and not too bright but has a big heart, while Maxine is ambitious and assertive. The department works closely with other local officials, including austere and short-tempered but eminently fair judge Henry Bone (Ray Walston) and wily opportunistic attorney Douglas Wambaugh (Fyvush Finkel), a real ambulance chaser. (Kelley is himself a former lawyer.)

(Though Picket Fences ran four short seasons, most of the cast have gone on to busy careers. Holly is a regular on Navy NCIS, Combs had a long run on Charmed, and many turned up on later Kelley shows.)

The series' tone is established in the pilot's opening sequence, in which Rome's small-town musical production of The Wizard of Oz is cut short when the Tin Man drops dead, apparently of a heart attack later ruled foul play by local medical examiner (Kelly Connell). Other early episodes include darkly humorous storylines which include Maxine's affair with a circus midget (Michael J. Anderson), and another show in which a happy-go-lucky grade schoolgirl brings a severed hand she found to show-and-tell.

The series was, to some degree, probably influenced by the groundbreaking St. Elsewhere, which had ended its six-year run a couple years before. (Another Kelley series, Chicago Hope, emulated many of St. Elsewhere's qualities more directly.) That series quickly broke away from the conventions of TV hospital dramas toward an almost surreal world blurring the lines between TV Land and reality, in which the blackest of black comedy moved freely with humanist drama driven by richly-defined characters.

Picket Fences does much the same. If any, the prolific Kelley goes one step further, embracing its unreality and while making no attempt to explain or justify its occasionally wildly improbable set pieces. Characters sometimes burst into song, giving Broadway-polished performances (eight-year-old Zach, for instance, is a polished trombone player, the equal of Lisa Simpson), while as a matter of narrative convenience, Baker's physician is up to speed on virtually every medical procedure known to man.

Perhaps the show's willingness to disregard realism is best exemplified in Finkel's marvelous character, which seems to represent every defendant, every litigant before Judge Bone, at one point even claiming the severed hand as "his client." Unrepentantly crafty, Finkel's character was a real find, and his constant legal sparring with Walston's judge became a highlight of most every show.

Indeed, the show's abundance of seasoned character actors, armed with Kelley's rich characterizations, comes close to stealing attention away from the Brock family. Besides Finkel and Walston, old-timers like Dabbs Greer, Robert Cornthwaite, Ann Morgan Guilbert and others became regulars.

Picket Fences was shot on standard 35mm film but, like some U.S. network shows of its era, finished on videotape. Whatever the case, about 95% of episodes are culled from film, but certain transitional material: establishing shots, montages, and the like are sourced from a video master of early-1990s vintage. This is noticeable, especially on larger screens, but the presumably extra effort that went into using higher-grade 35mm elements whenever possible was a good one.

Its 22 first season shows are spread over six single-sided, dual-layered discs and are not time compressed, nor does any of the music seem to have been altered for home video release. The Dolby Digital stereo is pleasant and up to early-1990s network standards. An alternate stereo dubbed version in French, and a mono track in Spanish are included, along with English and Spanish subtitles.

The only supplement is a short but warm featurette running 14 minutes in full frame format featuring Kelley, co-executive producer Michael Pressman, actors Skerritt, Baker, Holly, Mandylor, Finkel, Combs, Shenkarow, and Wylie. That virtually all of the surviving leads appear here is a testament to the show's quality.

Though its extreme eccentricities (think David Lynch, all warm and fuzzy**) are sometimes overplayed and a little bit forced, Picket Fences is a charming and disarming show with strong writing and excellent performances. Highly Recommended.

* The show was actually shot in and around Monrovia, a picturesque community northeast of Los Angeles. Sharp-eyed viewers will note palm trees popping up in the background, not exactly native foliage.

** The guest appearance by Anderson, the backward-talking little person on Twin Peaks, only serves to emphasize this.