MPI Home Video // Unrated // July 31, 2007
List Price: $19.98 [Buy now and save at Amazon]
Review by Stuart Galbraith IV | posted July 7, 2007 | E-mail the Author
John Wayne's first TV special as producer-host is a sometimes effective, frequently tacky affair, though much of the tackiness has to do with the era's variety show/special format rather than Wayne. Swing Out Sweet Land was a November 1970 "special program in living color" (repackaged here as John Wayne's Tribute to America) featuring an all-star cast of movie and TV greats, comedians and pop stars. Though it frequently teeters toward gaudiness typical of '60s variety shows, parts of it are surprisingly good and it's a fascinating document of its era, even indirectly addressing then-current events like Vietnam protestors and race riots. 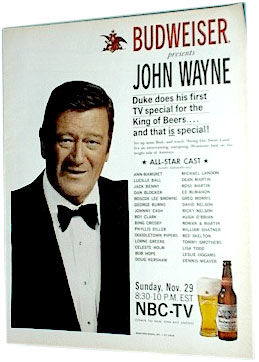 The 80-minute show is basically a thumbnail history of the United States, with Wayne tracing the development of the nation with the show's centerpiece, a single, giant set: a soundstage-size map of the continental United States. Like a mammoth jigsaw puzzle, new states are added one-by-one and, when Wayne gets to the Civil War, the whole thing splits in two with the force of a volcanic eruption. Glen Campbell sings "This Is a Great Country" from the rafters above it, while dramatic scenes play out atop it, in appropriate sections.

Trying to be all things to all people, the show awkwardly shifts back and forth between little dramatic recreations, patriotic musical numbers, and typical variety special comedy sketches. Bonanza's Michael Landon and Dan Blocker recreate Peter Minuit's purchase of Manhattan from the Indians in a broadly comic scene recalling Groucho Marx's appearance in Irwin Allen's notorious The Story of Mankind (1957), which this in some ways resembles.

Bob Hope "entertains the troops" at Valley Forge: "Yeah, Paul Revere - the Midnight Cowboy of 1775!" and Ann-Margret gets to sing. Next, in front of Independence Hall (well, Knott's Berry Farm's recreation, judging by the very un-Philadelphian palm trees in the distance), Wayne introduces the first big musical number: a sizable chunk of the Declaration of Independence, word-for-word, is sung by dancing revolutionaries in the style of Hair's "The Age of Aquarius."

And yet sprinkled throughout are little dramatic vignettes that actually are pretty good: George Washington (Lorne Greene), John Adams (William Shatner), Thomas Jefferson (Hugh O'Brian), and Alexander Hamilton (Ross Martin, all well-cast when you think about it) discussing the future of the nation following the first president's inauguration; Dennis Weaver and Celeste Holm, as the parents of Abraham Lincoln, in a wagon train to Illinois. Wayne himself, in his iconic Rio Bravo attire, appears in one neat little sequence where he rides silently through what looks like a genuine ghost town out in the desert somewhere. A couple of the musical numbers, especially Johnny Cash's "Ribbon of Steel," are memorable.

In most respects, though, the special is typical of genre, with Phyllis Diller showing up as Belva A. Lockwood, the first woman candidate for president, Dean Martin as Eli Whitney (Dean Martin?!), Dan Rowan and Dick Martin as Orville and Wilbur Wright, etc. Wayne turns up in several of these sequences, obviously reading his lines off cue cards. Many of the guests, such as Dean Martin, Glen Campbell, and Ann-Margret, had or would soon appear in one of Wayne's pictures. (Son Patrick Wayne even appears, in a brief, uncredited bit.)

There's also an attempt to apply the lessons of American history to current social problems. Tom Smothers, sharing the stage with Wayne, gives a speech arguing in favor of peaceful dissent and Freedom of Speech, an obvious reference to Vietnam. Near the end Mark Twain (Bing Crosby, playing it straight) and Frederick Douglass (Roscoe Lee Browne) sit on a bench discussing the censorship of Huckleberry Finn and other racial issues. At the end of the show** Wayne gives a rambling speech he might have written himself, arguing that "'free' is still the best four-letter word" and that "the moon is a nice place, but I wouldn't want to live there."

Happily, Swing Out Sweet Land is presented in its original form, uncut and complete with its NBC network introduction, while all the original commercials from host Anheuser-Busch ("When you say Budweiser...you've said it all!") are included as an extra feature. (The commercials are all actually pretty impressive, and Wayne appears briefly in one of them.) Except for the commercials, the entire show was recorded on videotape, and looks good for its age and the now dated video technology. Optional English subtitles are included; song lyrics are transcribed and the mono audio is okay.

Beyond the aforementioned commercials, the only extra is an excerpt of Wayne's appearance on a November 1960 episode of What's My Line?. An annoying splice/jump-cut at a key moment all but negates the extra's value, however, and Wayne's small talk (plugging The Alamo, mainly) is not very interesting.

Swing Out Sweet Land is a real relic, but an interesting and sometimes entertaining one. Recommended for John Wayne and TV nostalgia fans.

** Though states are added to the union one-by-one with great fanfare, the last five or six go unmentioned, which must have really disappointed viewers living there. Alaska and Hawaii are shut out completely, even on the big map; I guess the giant soundstage ran out of floor space.