Fox // Unrated // June 12, 2007
List Price: $19.98 [Buy now and save at Amazon]
Review by Stuart Galbraith IV | posted July 13, 2007 | E-mail the Author
Don Ameche, rather than The Ritz Brothers, comes off quite well in Fox's 1939 musical-comedy take on Alexander Dumas's The Three Musketeers, a lavishly appointed and generally agreeable picture that's part of 20th Century-Fox Home Entertainment's handsomely packaged "Cinema Classics Collection." The screenplay is surprisingly faithful to its source, though in this version Athos, Aramis, and Porthos are impersonated by the super-zany Vaudeville trio, cast here as "three [unnamed] lackeys." 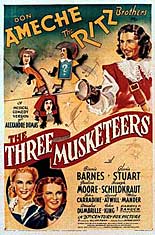 The Three Musketeers was directed by Allan Dwan, who by 1939 had already been making movies for nearly 30 years; he and cinematographer J. Peverell Marley (who had also shot the 1935 version) give it much the same dense opulence Dwan had brought to his silent film collaborations with Douglas Fairbanks, films like Robin Hood (1922) and especially The Iron Mask (1929). Replete with big sets and showy glass shots, it's a handsome production.

Ameche is just about perfect as D'Artagnan, full of boundless energy and naive chivalry. It's a great performance, and he alone makes the film worth watching. The supporting cast is likewise excellent, with Barnes an effectively alluring Milady De Winter, though Gloria Stuart, inexplicably, is obviously dubbed by another actress. Mander is quite good underplaying the scheming Richelieu, and though he doesn't have much to do, Atwill is likewise fine. Probably the biggest surprise among the performances is John Carradine's atypically timid and mousy innkeeper Naveau, the kind of part usually played in such films by Donald Meek or Percy Helton.

As for The Ritz Brothers (Al, Harry, and Jimmy), well, they're as much an acquired taste now as they were 70 years ago. Completely forgotten today except by film buffs and old-time comics (their fans include Mel Brooks and, believe it not, Pauline Kael), the team was undeniably popular in the late-1930s and inarguably bridged the styles of film comedy that dominated the early- and mid-1930s (adapted from the stage and hangers-on from the silent era) with the slicker, faster, and streamlined comedians (Bob Hope, Abbott & Costello, etc.) that would dominate the forties, but their rubber-faced mugging generally plays more silly than funny.

(The dialogue serves them better than their physical antics: "Canst thou ride a horse?" asks one of the boys. Another's reply: "Canst.")

While their comic forte - precision dancing and animated cartoon-like frenetic energy - hinges on a lack of individuality, as movie characters they're so devoid of personality they're more like a unit of raw, uncontrollable energy than three living human beings. The script doesn't even bother to name them, or list the brothers by name. (Interestingly, former silent clown Raymond Griffith was one of the film's producers.)

Fox's DVD of The Three Musketeers is presented in its original full frame format in a handsome black and white transfer. The image is sharp with little signs of wear. Optional English and Spanish subtitles are included, and the songs are subtitled. The mono audio is clean and clear.

Included are two Fox Movietone newsreel excerpts featuring the boys. The first documents their footprints-in-cement ceremony at Grauman's Chinese Theatre, while the second is a generally unfunny bit with the team clowning around a hotel swimming pool in Florida.

Not mentioned anywhere on the packaging is a set of four faux "lobby cards." Though they're not reproductions of the actual original lobbies, they are handsome and representative black and white stills, though one of the captions misidentifies Pauline Moore as Binnie Barnes.

The Ritz Brothers' version of The Three Musketeers isn't high on anyone's revival list, partly because Richard Lester's vastly superior two-movie adaptation of 1973-74 did so much better integrating the high adventure of Dumas's story with some screamingly funny bits that don't play like the vaudevillian set pieces of the 1939 film. Still, overall it's probably the team's best movie, and Don Ameche's wonderfully spirited D' Artagnan holds it all together. Recommended.