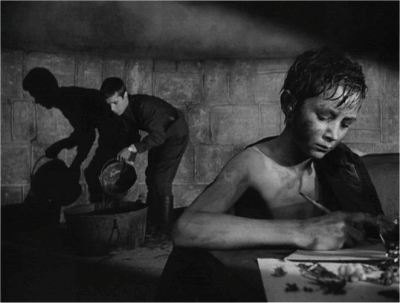 As the first full-length feature by acclaimed Russian director Andrei Tarkovsky, Ivan's Childhood (1962) reminds us that growing up isn't all fun and games. Our title character (portrayed by young Nikolai Burlyaev, above) once enjoyed a seemingly carefree life with his father and mother; now, he's directly involved in World War II after their deaths by German soldiers. The orphaned boy enthusiastically begs for a position on the front line, frequently accepting reconnaissance missions where adults fear to tread. He's a 12 year-old kid who's moved from a happy family life to viewing army officers as primary role models. In short, Ivan's "childhood" has been taken from him.

As with the majority of Tarkovsky's films, Ivan's Childhood burns slowly but picks up plenty of steam. The film's hypnotic dream sequences---transporting us back to Ivan's happier days---are typically shattered by the reality of his new life in the trenches. These environments serve as perfect halves to a whole, since we couldn't fully appreciate one without the other.

Based on Vladimir Bogomolov's short story "Ivan", Tarkovsky's portrait of this determined young boy is a quiet, meditative story ruptured by the nightmares of war. Ivan's commanding officers urge him to leave the front lines and return to school and normal 11 year-old activities, yet the young soldier stays loyal to the conflict. Upon its release in 1962, Ivan's Childhood was banned in its home country for the portrayal of children serving on the front lines---a practice that was truthful, though it certainly wasn't good for Russia's image. Tarkovsky himself wasn't pleased with the final product; and while it's certainly not a bad film, Ivan's Childhood was salvaged from the previously failed attempts of another director. In other words, this was never fully Tarkovsky's "baby" to begin with.

Still, Ivan's Childhood proved to be immensely popular with international critics, earning the Venice Film Festival's Golden Lion and the attention of several acclaimed directors. The film's stark, poetic imagery carries more weight than the ambiguous story underneath; more than Ivan's present situation or the quasi-love story of a commanding officer, Ivan's Childhood revolves around just that. It's the harsh juxtaposition of dreams, nightmares and reality that makes it a fascinating debut feature, even if it's not considered Tarkovsky's greatest feat.

Presented on DVD by Criterion, Ivan's Childhood has been granted a well-rounded (and long overdue) Region 1 release, combining a strong technical presentation with a small collection of retrospective bonus features. Let's take a closer look, shall we?

Presented in its original 1.33:1 aspect ratio, Ivan's Childhood looks terrific from start to finish. The smooth, crisp transfer is free from digital artifacts and pixellation, while only minor instances of dirt and debris are present during a few sequences. NOTE: As with a few other recent releases, Criterion has chosen to window-box this film, creating a black border to compensate for television overscan (a larger, uncropped screen capture can be seen here). Though this window-boxing will only prove to be a mild problem for some viewers, it's certainly worth mentioning.

The film's Dolby Digital mono mix (presented in the original Russian) boasts clear dialogue and music cues that don't fight for attention. Some of the high end sounds slightly thin and there's a bit of hiss, but this is undoubtedly the best that Ivan's Childhood has sounded on DVD. Optional English subtitles have been included during the main feature.

Seen below, the stark menu designs are basic and easy to navigate. The 95-minute main feature has been divided into 18 chapters, while no obvious layer change was detected during playback. This one-disc release is housed in a standard clear keepcase and includes a thick booklet (covered in more detail below) and a Criterion promotional insert. 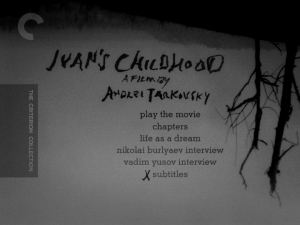 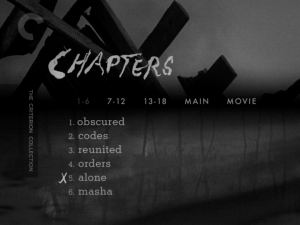 Bonus Features
A few brief extras help to support the main feature nicely, though an audio commentary isn't part of the package. The main attraction is a new video essay entitled "Life as a Dream" (30:44), featuring comments by film scholar and author Vida T. Johnson. Co-writer of "The Films of Andrei Tarkovsky: A Visual Fugue", Johnson dissects a few themes from Ivan's Childhood and briefly touches upon other films in the director's canon. Johnson also provides a backdrop of the time and environment in which the film was made, when young Russian directors were really given a chance to explore the medium and branch out.

Also included is a pair of Video Interviews featuring actor Nikolai Burlyaev (5 parts, 10:47 total) and cinematographer Vadim Yusov (4 parts, 11:17 total). Both speak candidly and freely about working with Tarkovsky; Yusov obviously approaches it from a technical point of view, while Burlyaev recollects the experience from a much younger and more emotional perspective. Like the video essay, optional English subtitles are included for translation purposes only. Both are presented in 1.33:1 and feature a handful of film clips and miscellaneous production photos.

Slow-burning and desolate, Ivan's Childhood is a strong debut from a director who would create more ambitious projects in later years. The film's rich cinematography and stunning imagery keep things visually interesting, while the performances of young Nikolai Burlyaev and company create a heightened sense of realism. Those new to Tarkovsky's work should understand that it takes some getting used to, but anyone familiar with the director should find Ivan's Childhood a rich and engaging experience. Criterion's excellent treatment combines a strong technical presentation with a handful of appropriate bonus features. It may not be perfect blind buy material, but fans of the film should certainly enjoy Criterion's efforts. Recommended.