Universal is dipping into its back catalog for HD-DVD releases, something that is a welcome relief for those of us who don't get excited by the latest Hollywood blockbuster.  One of their most recent releases is 1998's Meet Joe Black.  Though this film was has been widely criticized for being overly long, the three hour movie actually flows well.  The HD DVD disc looks very good, and though there's a slight problem with the audio levels, this is a great disc to own. 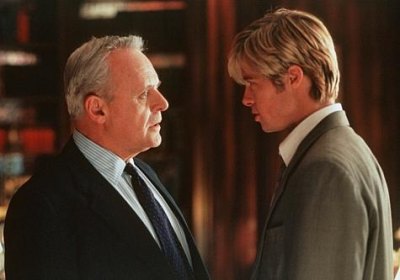 William Parrish (Anthony Hopkins) is a multi-billionaire who is the CEO of a media empire.  He has everything a man could want, but when he collapses in his office with chest pains, he realizes that the end is near.  He doesn't die however; he hears a disembodied voice talking to him.  He writes it off as an auditory hallucination until that evening when the voice returns and proclaims that he wants to meet Parrish, as a matter of fact, he's right outside his front door.  Enter Death (Brad Pitt.)  The Grim Reaper himself shows up and explains to the aging businessman that he wants to see what the world is like.  He wants to take a vacation and experience 'life.'  He needs a guide though, and if William will agree to show him around he'll get....time.  Maybe hours or days, or possibly even weeks, but when death tires of the world he'll take William Parrish with him.

Not really having much choice, Parrish agrees and introduces his new companion to his family, coming up with the name Joe Black on the spur of the moment.  Joe accompanies Bill to work, attends board meetings, discovers the joys of eating peanut butter by the spoonful, and finds himself falling in love with Parrish's youngest daughter Susan (Claire Forlani.)  Susan's is completing her residency at a New York hospital and as she spends time with Joe, suddenly finds herself falling head over heals in love.  A fireworks-in-the-sky kind of love she's never felt before and Joe feels the same way.  But can Death really fall in love with a mortal?  And what about when he wants to take her away with him, is that something that she can accept? 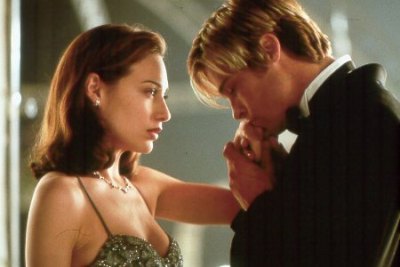 This is one of those movies where the time just seems to fly by.  When it was released, the long playing time was held against it, but this isn't a bloated or indulgent film, it is one that takes the time to examine the lives of a family, and isn't rushed.  Granted it plays a bit better at home where viewers can easily pause it to get a snack or run to the bathroom, but there aren't and extra scenes that seem superfluous.  The story flows well, and that it's in director Martin Brest's favor that he was willing to give the story the time that it needed to unfold.

The acting is just superb to.  Brad Pitt does a fantastic job as Joe, making his character really seem to be in the world but not of it.  Pitt shows how Death changes over the course of the film, but he does it gradually and realistically, and not without some humor too.  The person who really stole the film is Anthony Hopkins.  A fantastic actor to begin with, Hopkins breaths life into William Parrish and makes him a three dimensional being who seems so real it's uncanny.  The scene where Parrish argues with Death over Susan is a fantastic example.  Here's a strong-willed person who sees his daughter in danger.  Though he isn't holding any cards, he still confronts Death and tries to change what is happening with just the power of his personality.  Chilling and believable at the same time.

The script works well, and is filled with beautiful dialog that is usually only found in novels.  There are many memorable passages from the film, but the scene where Parrish is describing what he wants for his daughter is touching, powerful, and what every parent wants for their children:  "I dream of is a man who will discover Susan, and that she will discover a man who will love her, who is worthy of her, who is of this world, this time and has the grace, compassion, and fortitude to walk beside her as she makes her way through this beautiful thing called life."

The 1.85:1 image looked really good, especially for a movie that is nearly a decade old.  The level of detail is excellent, with every crease and wrinkle on Anthony Hopkins' face clear and well defined.  The colors are equally strong, bright, and vivid.  Black levels are solid without being crushed.  This is just an all over nice looking presentation.  The only thing that prevents this from being a five star presentation is the fact that there is some edge enhancement in some scenes, a process that I was hoping would be abandoned by the HD formats but clearly hasn't been.

This movie's DD+ 5.1 audio track is excellent throughout most of the film, but there is a flaw that lowers the rating a few notches.  The range between the loudest and softest parts of the movie is just too great.  For the most part this isn't a problem, but there are a lot of scenes where people whisper to each other and it's often hard to hear what they are saying.  If the volume is turned up so that the quiet parts are audible, the more dynamic scenes are way too loud.

Aside from that the disc sounds really good.  Since the film is mainly dialog based, there aren't a lot of exciting audio effects, though the rears are used effectively with background music and sound effects.  The music is full and clear, and Israel Kamakawiwo'ole's version of Over The Rainbow/What A Wonderful World that plays over the ending credits is especially crisp with Israel's high pitched voice sounding particularly beautiful.

One of the things that really bothers me about the new HD formats is the fact that the extras from the SD release aren't always ported over.  If studios want the general populace to invest in these new technologies, they shouldn't make these new discs look less appealing than their SD counterparts.  Unfortunately that's what happens much more frequently than it should.  Case in point:  This disc.  The SD Meet Joe Black Ultimate Edition (now out of print) had a good selection of bonus items including the 1934 version of the film, Death Takes a Holiday.  Unfortunately this second feature isn't included on the HD DVD.  Even in SD resolution it would make this package much better.  What is included?  Well there's a Spotlight on Location fluff piece that's pretty much worthless, a photo montage, and a trailer for the film.  In addition to the 1934 version of the film, the disc is missing some production notes, cast and crew bios and some admittedly useless DVD-Rom content.  (Links to the film's web site. *Yawn*)  While I can understand why they didn't include Death Takes a Holiday, the main feature is three hours long as it is and eats up a lot of space I'm sure, they should have made an attempt to include the other bonus items at a minimum.

This is one of the few romance movies made in recent years that really works well.  Yes, it is three hours long, and if you don't think you can sit for that long, pass this by.  If you do however, you'll be missing a touching, funny, and interesting movie.  Meet Joe Black is a romantic film that isn't sickenly sweet, a drama that has real emotion and a movie that will have you cheering in parts.  This HD-DVD version looks excellent, and though there's a slight problem discerning some whispers, that was undoubtedly a problem during the film's theatrical release too.  A great film to curl up with someone you're romantically involved with, this disc is Highly Recommended.