BCI Eclipse // Unrated // August 21, 2007
List Price: $19.98 [Buy now and save at Amazon]
Review by Stuart Galbraith IV | posted August 16, 2007 | E-mail the Author
If you're a fan of Euro-horror in general or Spanish genre star and screenwriter Paul Naschy in particular then Exorcism (Exorcismo, 1975), made during the stampede to cash in on the huge success of the William Friedkin/William Peter Blatty The Exorcist (1973), will likely appeal to your tastes; most everyone else will want to give this moody fantasy thriller a pass. Naschy claims to have come up with the story for the film long before the film of The Exorcist was released and there's little reason to doubt him: although its eventual production was clearly prompted by the Hollywood movie's success, until the last few minutes Exorcism and The Exorcist have very little in common. The last reel, however, is a lot like The Exorcist, though even that adds a few new wrinkles of its own. 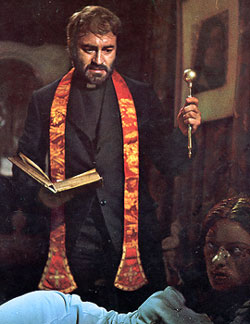 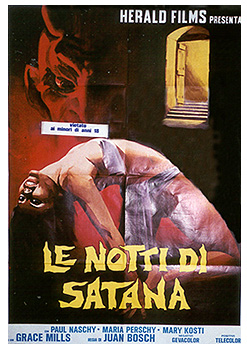 The bulk of Naschy's film, which he wrote under his birth name, Jacinto Molina (the IMDb seems to think Naschy and Molina are two different people), is closer in spirit to Hammer's The Witches/The Devil's Own (1966) than Friedkin's film. After Leila Gibson (Grace Mills, born Mercedes Molina), the youngest daughter of a wealthy British family, is injured in a car accident along with her archeologist fiancé, Richard, she begins exhibiting strange, antisocial-to-hostile behavior toward everyone around her. Leila's brother, John, enlists the aid of Anglican Father Adrian Dunning (Naschy) because it seems that Richard has been luring Leila into his depraved world of hallucinogenic drugs and satanic rituals.

Initially Father Dunning sees no evidence of this, but after John is murdered - his neck snapped like a twig and twisted 180-degrees - he begins to suspect dark, supernatural forces are at work.

(Spoilers) Exorcism departs from The Exorcist's premise in one key respect: it's not a tale of faith (and, specifically, Catholicism) and possession by Satan himself. Rather, the hippie, LSD-tripping devil worshippers facilitate the possession of Leila's soul by her own late father, Leonard, who was institutionalized in his final years and now vengefully tries to destroy the family that had, in his eyes, abandoned him. Leila's possession by her own father, especially an implied rape-from-the-grave sequence, raises the equally disturbing topic of incest. The issue isn't explored is deeply as it might have, while at the same time raises more questions than it answers: Why do the devil worshipers want to help the dead father and his thirst for revenge? What's his connection between the father's spirit and the sinister family chauffer (and closet Satanist) actually responsible for two of the murders?

Naschy's specifically Anglican hero and the film's British setting probably served two purposes: it avoided censorship problems for its release in predominantly Catholic Spain (a common practice dating back to Riccardo Freda's Italian-made I Vampiri in 1956) while, perhaps, making the film more marketable to English-speaking countries. In any case the British exteriors give the film a hint of the flavor of the German-made Edgar Wallace mysteries of the 1960s which likewise shot some exteriors around London.

The picture blatantly rips off The Exorcist only at the very end, during Father Dunning's exorcism of Leila, which is executed much the same way though the make-up effects are impressively creepy for such a modestly-budgeted film, especially its use of demon-eyes contact lenses and the vividly conveyed implication that Leila's body, fully-possessed, is rotting into putrid meat like a corpse.

Though the DVD case proudly boasts that Exorcism has been "mastered in high definition from the original negative," and while the film does indeed look impressively clean and sharp, the full frame presentation is all but ruinous. The open matte release was clearly intended for widescreen exhibition, probably 1.66:1 though possibly 1.85. Viewers with widescreen TVs will notice how much better director Juan Bosch and cinematographer Francisco Sanchez's framing looks when reformatted to 1.75:1. Unfortunately, by reformatting the image it's impossible for non-native speakers to simultaneously listen to the picture in its original Castilian Spanish because the English subtitles get cut off.

An alternate English-dubbed tracked (both are Dolby Digital 2.0), possibly produced in Spain, isn't bad, though the synchronization seems to be about six-to-twelve frames off, with lip movements consistently lagging about a quarter to a half-a-second behind the English dialogue.

The big supplement here is a 29-minute "Entrevista con" Paul Naschy, with the star warmly and articulately discussing (in Spanish with optional English subtitles) the genre and Spain's role in its development. Naschy's a delight, partly because he's so generous in acknowledging credit to his various collaborators, partly because he's so forthcoming about details good and bad about his movies. The featurette includes lots of great clips from about a dozen of his films, including Hunchback of the Morgue, Blue Eyes of the Broken Doll, Horror Rises from the Tomb (all 1973), A Dragonfly for Each Corpse, Devil's Possessed (both 1974), Night of the Howling Beast (1975), and Human Beasts (1980). In contrast to, say, Christopher Lee, Naschy has an enormous and engaging affection for his horror movie accomplishments and for the genre at large. Naschy also provides an amusing introduction that precedes the feature.

Also included is an international trailer, in English, and the picture's original Spanish opening and closing titles. About three-and-a-half minutes worth of alternate "clothed" sequences, cuts minus nudity for tamer markets, is included for those interested in such things, while pretty good poster and still galleries (including a sampling of international poster art) round out the DVD's extras.

Finally, a four-page text insert offers a very interesting and well-written essay by Naschy authority Mirek Lipinski. It's full of good behind-the-scenes info and includes a good analysis of the film.

Hardly the blatant Exorcist rip off on the scale of such films as The Antichrist and the bastardized reworking of Lisa and the Devil, The House of Exorcism, Paul Naschy's Exorcism is less derivative, milder, and more like a supernatural mystery. It's no lost classic, but fans Spanish horror films will find it interesting and enjoy Naschy's sincere performance, though the pointless full-framing of the transfer significantly hurts the overall presentation. Recommended.