Spring in a Small Town 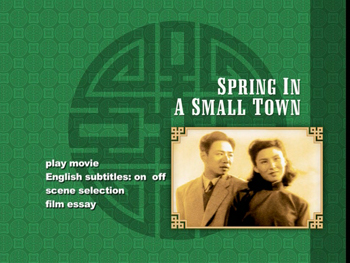 Though the 1948 film Spring in a Small Town was voted the best Chinese movie of all time by more than one critics association, the new DVD release of the movie isn't going to win any such awards.

I realize that not every old film, particularly ones from parts of the world where cinema preservation hasn't exactly been a top priority, has materials available that lend themselves to proper restoration. I also realize that not every film company is going to have the budget to go over every obscure foreign film frame by frame to make it look fresh and clean. I'm actually willing to forgive quite a lot and have, in fact, been criticized for not demanding enough from my DVDs. Even so, if this print of Spring in a Small Town has been cleaned up at all, I'd be scared to see what they started with. Just the thought of such an atrocity makes my heart hurt.

Why I am making this such a big issue up front is this bottom-feeding DVD makes it really, really difficult to enjoy Spring in a Small Town. Ever-present scratches and spots, missing frames, fuzzy resolution, flickering images, even segments where the picture undulates like a movie screen in a windstorm--if you can think of any kind of trauma a film print can go through, it's evident on this disc. What makes me think Cinema Epoch didn't really put much into this entry of their "Chinese Film Classics Collection," however, is how bad the subtitles are. The actual translation is okay, if lacking in finesse, but every line in the movie appears onscreen for the exact same amount of time, which is only a couple of seconds, regardless of the length of the sentence. It's like they are on an automatic timer, and they move in and out based on a particular rhythm. This means some lines don't appear until midway through the spoken patch of dialogue they translate, and often disappear before the audio is through--meaning they will quite regularly be gone before you are done reading them. It's hard to be emotionally invested when you're essentially stopping every couple of minutes, asking "Wait, what did she just say?"

Looking past that as much as I can, Spring in a Small Town, directed by Fei Mu and written by Li Tianji, is actually quite deserving of its praise. A drama of heartache and unrequited feelings that would have been ripe for a remake by Merchant Ivory (and was indeed remade in 2002 by Tian Zhuangzhuang as Springtime in a Small Town), the movie is a beautiful portrait of longing, regret, and restraint.

Driven by a melancholy voiceover from its main character, Spring in a Small Town is the story of Zhou Yuwen (Wei Wei), a woman who wasn't patient enough to wait for the return of her lover and instead married a man who was wrong for her. The husband, Dai Liyan (Shi Yu), is an aimless sort, knocked low by a bout with tuberculosis that may or may not have been exaggerated by his own sense of the dramatic. They live with his vivacious sixteen-year-old sister (Zhang Hongmei), who acts as the heartbeat between them. Without her, they'd probably both crumble.

That is until the day that Zhang Zhichen (Cui Chaoming) returns. Unbeknownst to the married couple, Yuwen's lover was also Liyan's best friend. Dormant feelings are reignited, and though Zhichen insists they cannot act on them, the longer he sticks around, the more Yuwen thinks they should. And the greater chance she'll become completely unhinged.

Spring in a Small Town in many ways epitomizes what we have come to expect from Eastern storytelling. There is probably more here under the surface than there is out in the open. What the characters avoid saying is usually more important than what they actually do say. At first, the actors might appear a little stiff to 21st-century, Western eyes, but that would be a wrong assessment. The cast has completely mastered a minimalist style of expression, and if you keep your eye on their gestures--even moreso than their facial expressions--so much of what is really going on inside them is revealed. At one point, when Yuwen is trying to do the right thing, Zhichen says exactly the wrong thing, and rather than responding, the actress just falls back into him. It's a tiny moment, it almost doesn't register, but when it does hit you, it's like a loud thunderclap.

But how can we enjoy such subtlety when it's buried so deep under grime and neglect? I'd love for everyone to see Spring in a Small Town, but truthfully, until a better DVD comes along, until some film preservation wizards work some remarkable magic, it's going to be hard to entice viewers to sit through this powerful piece of work, and more's the pity for it.

Video:
Spring in a Small Town is full frame, black-and-white. As noted in the main review, the quality of this DVD is very poor and the look of the print source used is quite dilapidated. Caveat emptor.

Sound:
The original Chinese audio has a mono mix that is as bad as the picture. There is a recurring hiss that comes in and out at random intervals, and at other times, the audio noticeably drops out altogether, coming back loudly when someone speaks and then cutting as soon as they are done. Only once, however, did I see someone talking without hearing any accompanying voice.

As noted in the main review, there are English subtitles, but these move at an unnatural pace, not properly timed to the dialogue as it's spoken and regularly disappearing before it's reasonable to expect the viewer has actually read them.

Extras:
Unsurprisingly, there is only one extra, a short but informative essay by critic Wade Major that is mainly about director Fei Mu and the cultural context in which Spring in a Small Town was made. This is on the DVD itself and is navigated using the arrow buttons on your remote.

FINAL THOUGHTS:
On the strength of the film alone, Spring in a Small Town, director Fei Mu's 1948 drama of suppressed passion, would receive an unqualified recommendation from me, and that's the only reason this basement-quality DVD is going to get ranked as Rent It rather than my advising you to skip it altogether. How does one justify such a minimal effort for a film that is argued to be the best China has produced, the shining star of Chinese cinema's Golden Age? For a series called "The Chinese Film Classics Collection," it appears Cinema Epoch is only giving these treasures the minimum of attention. I'm glad that someone is preserving films like Spring in a Small Town in some capacity before they completely fade away, and I do think everyone should take the time to see the movie, but is it too much to ask for a little something more by way of cleaning up the picture and sound?