Acorn Media // Unrated // September 11, 2007
List Price: $49.99 [Buy now and save at Amazon]
Review by Paul Mavis | posted August 28, 2007 | E-mail the Author
Lilies, the 2007 British TV series about three young women growing up in Liverpool in the early 1920s, has been released by Acorn Media. Lasting only one season (in this case, only 8, one-hour episodes), Lilies looks correct, with a meticulous production design that evokes the squalor and beauty of 1920s Liverpool. As well, it admirably attempts to tell the story of three independent Catholic women who find precious few opportunities in a country not amenable to either their religion or their gender. However, an utterly predictable scenario, heavy-handed, obvious symbolism, and some decidedly un-charismatic acting, sinks Lilies to the level of low-grade soap opera. 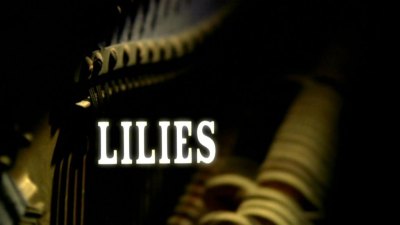 Right after the First World War, the Moss girls, Iris (Catherine Tyldesley), May (Leanne Rowe), and Ruby (Kerrie Hayes), struggle to keep their heads above water in the poverty-stricken Catholic section of Liverpool (by the 1920s, Catholic immigration made up over 25 percent of Liverpool's population). Their father, blustering Dadda (Brian McCardie), takes pick-up jobs when he can find them (including working as an untrained vet). Iris makes chocolates at home for sale on the cruise lines; May works as a housemaid in the wealthy Brazendale household, and Ruby, who trains for the Olympic swim team, eventually takes a job selling corsets. Billy Moss (Daniel Rigby), the WWI vet and brother of the girls, was invalided out of the war when his ship was sunk out in the Atlantic; he still suffers from shell shock, and hides a potentially devastating secret from the rest of the family.

Created by Heidi Thomas, Lilies turns every corner of its pseudo-convoluted plot with the intention of being a heavy, symbolic drama, but anyone who's ever watched a daily soap or read a romance novel will be miles ahead of it. It's difficult to understand what exactly Thomas was trying to accomplish with this familiar tale. Was it supposed to be an examination of the social and economic persecution Catholics went through in England during the 1920s? If it was, why are scenes connected with that theme undercut by a ridiculous insistence on ending every sequence on a comical note? In fact, almost all the "serious" scenes try for some kind of ridiculous "upbeat" coda, aided by truly atrocious plink-plunky musical cues, that leaves the viewer scratching their head, wondering what the point is of the whole endeavor. The film's obvious attempts at symbolism are laughably amateurish, as well. For example, there's a potentially devastating scene where a woman dies after childbirth, that is made ridiculous by a portentous, cliched inclusion of the woman's saint medal, tapping slowly against the bed post, stopping only when she dies.

Predictability is the only consistent element of Lilies. When shy, sensitive Iris - who we're repeatedly told wants a family - meets and falls in love with a "tragically injured" WWI vet, we guess immediately that sex will be impossible between the two on their aborted, horrific honeymoon. When conflicted Bobby has a visit from his bunkmate (who has lost both legs and an arm), we not only guess they were lovers, but during their supposedly revealing scene out at the ocean, where Billy's friend asks to go "float" out in the sea, we spot a mile off the obvious prelude to a suicide attempt that only the dimmest bulb couldn't figure out. And when May starts getting the eye from her employer Richard Brazendale (Stephen Moyer), it's a 1-2-3 connect-the-dots to how long until she's pregnant (even the twist to this storyline, where Brazendale's wife organized the affair, was painfully obvious due to the heavy foreshadowing of Mrs. Brazendale's hysterectomy). For supposedly a tough, "groundbreaking" drama, Lilies sure looks familiar.

The efforts to contemporize Lilies doesn't ring true, either. Often times, the characters engage in vernacular and actions that strain credibility for characters existing in that time period. And even if those actions were commonplace, the actors employed to get those circumstances across to us are hardly up to the task of making the average viewer sympathetic to their situations. I suppose McCardie as Daddie is the most successful of the actors in creating a reasonable complex (he's an widower Orangeman, raising three devoutly Catholic girls that he loves dearly), sympathetic character - and that's a big problem for a series designed around strong female characters. Aren't they the ones who are supposed to stand out in the film? The actresses portraying the sisters rarely engage our sympathies, with Hayes coming across as downright dislikeable in mean, surly, amateurish performance (it's also ridiculous to see her and be asked to believe she's an Olympic-caliber swimmer). I don't know the reason Lilies was canceled after only eight episodes (admittedly, British TV seasons have shorter season runs), but I wouldn't be surprised if it was because viewers didn't warm to the rather chilly cast. The storylines may have been familiar - that wouldn't stop audiences from tuning in - but a dislikeable cast will kill a show every time. 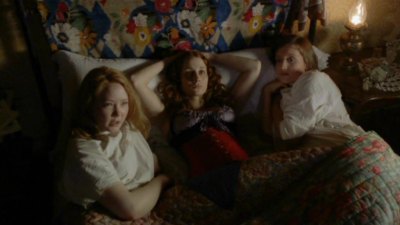 The Video:
The anamorphically enhanced, 1.78:1 widescreen video image for Lilies is quite nice, with no transfer issues I could spot (no PAL troubles), and a relatively sharp, clear picture.

The Audio:
The Dolby Digital English stereo is fine, with all dialogue crisply rendered. Close-captioning is available.

The Extras:
There's a fifteen-minute behind-the-scenes featurette on the importance of the series. After watching it, I remained unconvinced. There are also text filmographies for the cast and a photo gallery.

Final Thoughts:
Pure soap opera, and that wouldn't be a negative at all, if Lilies was done with even a modicum of originality, or, barring that, at least some good-natured wallowing in the soap conventions. However, Lilies opts instead for a pretentious air of importance, tempered by a unsteady mix of ill-placed humor and an unconvincing cast. Rent Lilies is you're one of those American viewers who must see every British TV offering (like me), but the casual viewer can safely skip it.

Paul Mavis is an internationally published film and television historian, a member of the Online Film Critics Society, and the author of The Espionage Filmography