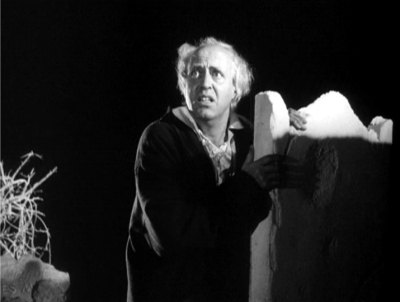 Very few of us are unfamiliar with the tale of Ebenezer Scrooge, but there's a good reason for that: Charles Dickens' holiday ghost story has been retold countless times in a variety of media. The original book had been in existence for over a century before Brian Desmond Hurst's 1951 film adaptation was released; starring the incomparable Alastair Sim in the title role, Scrooge (dubbed simply A Christmas Carol in the States) would eventually become one of the most celebrated holiday movies of all time.

The story is a simple morality tale, showing us the bitter heart of an old man changed after he witnesses his past, present and (possible) future unfold. Scrooge regards the upcoming season as little more than a burden: family gatherings are unnecessary, charity is foolish and coal is a costly expense. His former business partner, Jacob Marley, passed away several years earlier, and has arrived as a ghost on Christmas Eve to warn Scrooge of his impending doom. He would soon be visited by three more ghosts during the night, each revealing parts of his life and exactly where they would lead him. As we're all aware, Scrooge eventually sees the error of his ways, horrified at his future and simply glad to be alive on Christmas morning.

This 1951 adaptation is highly regarded by many fans as the definitive one, though other installments---including the 1938 Reginald Owen version and the 1984 TV special starting George C. Scott---have come dangerously close. Still, it's easy to see that this visualization of Dickens' story is almost completely pitch-perfect: boasting strong performances and perfect locales, it sticks close to the source material while adding its own style and charm. Sim's portrayal of Scrooge is an easy highlight, blending the right amount of humbug-ness with an almost maniacal zest for life as the story concludes. Most have seen and enjoyed this 1951 adaptation time and time again---and for those weaned on the other film versions, it's unlikely that you'll be disappointed here.

As much as we're familiar with A Christmas Carol, the real story is how Hurst's film has been treated on DVD. VCI's previous Special Edition in 2004 was a decent effort, combining a solid presentation of the black-and-white film with a few minor bonus features (and the colorized version, for those keeping score at home). They've outdone themselves with this brand new double-dip, a 2-Disc "Ultimate Collector's Edition" that boasts a fully restored image and a feast of new supplements. Though it's arrived a bit early for the holiday shopping season, it's fairly evident that fans of A Christmas Carol will want this under the tree. Let's take a closer look, shall we?

Presented in its original 1.33:1 aspect ratio, A Christmas Carol looks very good from start to finish. According to the DVD's liner notes, this release marks the first time that VCI was granted access to the original film negatives, allowing for a more concise restoration. Most of the dirt and debris has been carefully scrubbed away, but a few scenes look as if the contrast and/or brightness have been artificially boosted. Additionally, there's still a mild amount of softness and flickering during certain sequences, though it's rarely distracting. In nearly all regards, this is an extremely solid transfer that fans should appreciate and enjoy.

This two-disc set also includes two additional viewing options for A Christmas Carol: a cropped 1.78:1 anamorphic widescreen version, as well as the colorized version offered on the previous VCI release. The 16x9 presentation doesn't negatively affect the framing a great deal, but the original 1.33:1 aspect ratio is preferable; it's also worth noting that the opening credits are window-boxed. The colorized version is heavily worn around the edges and isn't really worth the trouble, but it's presented front and center on Disc 2 if you're looking.

As for the audio presentation, the Dolby Digital 2.0 mix sounds fairly good overall. Dialogue and music rarely fight for attention, while the only notable blemishes are most likely due to the source material. A brand-new 5.1 remix has also been created from the original audio stems, but the rear channels are weighted heavily and often drown out the dialogue. As with the video quality rating, the audio score is based on the original mix, not the monkeyed-around-with version. Both mixes show a reasonable effort from VCI, but the sounds aren't quite as polished as the visuals.

Optional English and Spanish subtitles are provided during the main feature, but the bright red letters are barely legible. A narrative track for the blind is also included, which is a surprising but welcome inclusion. 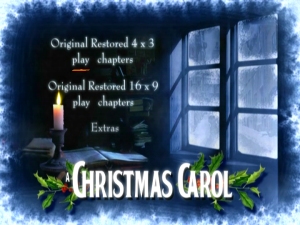 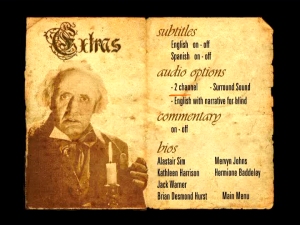 Seen above, the lightly animated menu designs are basic and easy to navigate. The 86-minute main feature has been divided into 18 chapters, while no obvious layer change was detected during playback. This two-disc release is housed in a clear, unhinged keepcase; no inserts are included, but the package is tucked inside an attractive fold-out slipcover.

Bonus Features
Disc 1 leads off with a new feature-length Audio Commentary by film historian Marcus Hearn and actor George Cole, who played the younger Scrooge. This is a very informative track, all things considered, with Cole serving as moderator during the bulk of the session. Aside from shedding a bit of light on earlier adaptations and the original book itself, there's also plenty of talk about the film's production and influence throughout the years. Hearn and Cole rarely lapse into silence during this engaging chat, which should easily be considered the highlight of the bonus features. Also included on this disc are Text Biographies for selected members of the cast and crew.

Though Disc 2 includes the colorized version of A Christmas Carol, we're also treated to the 1935 Adaptation of Scrooge starring Seymour Hicks (59:41, below left). Directed by Henry Edwards, this slightly condensed version remains an underrated film that fans should enjoy; unfortunately, it hasn't been carefully restored like the main feature. Dirt, debris, darkness and flickering plague Scrooge from start to finish, but there's a certain charm and spookiness that comes with the film's worn-out appearance. Divided into roughly 12 chapters, it's a welcome bonus that stands in good contrast with the main feature. 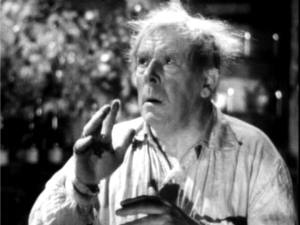 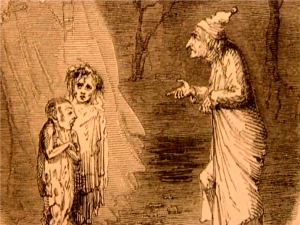 Next up are three featurettes which detail several aspects of the film's production. "Spirit of Christmas Past" (14:59) is an additional chat with Hearn and Cole; luckily, most of the information divulged here wasn't shared in the commentary. "Richard Gordon Remembers George Minter and Renown Pictures" (19:49) is an audio interview with Gordon, who helped raise money for A Christmas Carol and get it distributed in America. It's accompanied by a slideshow of production photos, which helps to set the tone perfectly. "Charles Dickens: His Life and Times" (6:46, above right) is a more straightforward affair, serving as a condensed but interesting snapshot of the author's existence with plenty of visual aids. All three pieces work well with one another, even if some of the production values aren't up to par with typical DVD behind-the-scenes featurettes.

The remaining extras cover some of the original promotion and recent clean-up of A Christmas Carol. A brief Before & After Restoration Comparison (2:10) details how the film was carefully polished for this DVD, including the equipment used and a few comparison clips from the original VCI release. The Photo and Press Book Gallery (5:25) is a running slideshow with plenty of production images, though it's oddly presented without music or additional commentary. Closing things out are the British and American Theatrical Trailers (1:44 and 1:41, respectively), which paint two very different pictures of the exact same film.

All bonus features are presented in a 1.33:1 aspect ratio; unfortunately, none include optional subtitles or Closed Captions. Aside from this slight nitpick, VCI has provided a comprehensive set of extras that fans will certainly enjoy.

It may have arrived a few months early, but VCI's new edition of A Christmas Carol will make a fine gift for fans of the cherished holiday classic. Most of us are familiar with Dickens' tale in one form or another, while this "Alastair Sim version" is, quite possibly, the most popular and enduring thus far...aside from the original book, of course. VCI has really delivered the goods with this 2-Disc Ultimate Collector's Edition, throwing almost anything and everything they could muster into one thoughtful package. It's not a perfect effort, of course: the alternate widescreen/colorized versions and the optional 5.1 track are a bit superfluous, while the red subtitles are a complete eyesore. Still, the bases have been covered very nicely, as this release boasts an excellent visual presentation and a comprehensive set of bonus features. All things considered, A Christmas Carol is an affordable and well-rounded package that comes Highly Recommended.