Elvira's Movie Macabre: Maneater of Hydra / The House That Screamed

Shout Factory // Unrated // September 25, 2007
List Price: $14.99 [Buy now and save at Amazon]
Review by Stuart Galbraith IV | posted September 17, 2007 | E-mail the Author
Busty Elvira (Cassandra Peterson), Mistress of the Dark, is back for another round of DVDs, six movies in all culled from her syndicated TV series of the mid-1980s, Movie Macabre - just in time for Halloween and the publicity blitz culminating with a dubious-sounding Fox reality show, The Search for the Next Elvira. This double-feature from Shout! Factory, Maneater of Hydra and The House That Screamed, offers interesting obscurities but poor transfers apparently dating back to the mid-1980s. The House That Screamed is at least 4:3 letterboxed, but Maneater of Hydra is a panned-and-scanned atrocity, worse than most VHS bootleg videotapes. 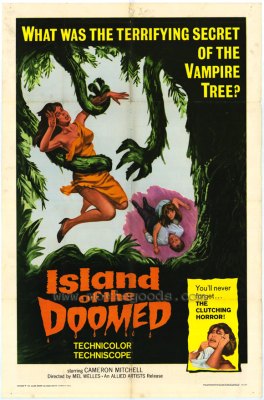 Maneater of Hydra (1967)
This is a Spanish-West German co-production released in the former country as La Isla de la muerte ("The Island of Death"), in Germany as Das Geheimnis der Todesinsel ("Secret of the Island of Death"), and first released theatrically in the United States as Island of the Doomed. The picture is a more-entertaining-than-it-ought-to-be throwback about a mad scientist and an island of poisonous and carnivorous plants.

There's plenty of room, certainly: the Baron's big island has been uninhabited since legends of a vampire-type creature sent the island's other residents packing. After a short digression with Mrs. Robinson living up to her name by trying to seduce an unresponsive Baron, people start disappearing or dying under mysterious circumstances, including the twin brother of mute manservant Baldi (Mike Brendel) and driver Alfredo (Ricardo Valle). Though the Baron is acting strange and overly-protective of his prized petunias and such, everyone begins to suspect Baldi of the various murders, though it's clear early on that the real culprit is a blood-sucking monster tree.

Directed and co-written by New York born actor Mel Welles, best-known for his performance as flower shop owner Gravis Muschnick in Roger Corman's The Little Shop of Horrors (1960), Maneater of Hydra is actually quite atmospheric if predictable, ultimately silly but effectively played with straight faces, and even the big vampire tree looks pretty good, far better than the American one-sheet poster above would suggest.

The English dubbing, perhaps supervised by Welles, is nothing if not amusing. Mr. Robinson is given a voice that's like a parody of George Sanders, while the Madrid-born Sampedro, despite her character's Irish-sounding name, is looped with a broad, Brooklynese Jewish mother voice, like Molly Picon or Louise Lasser. 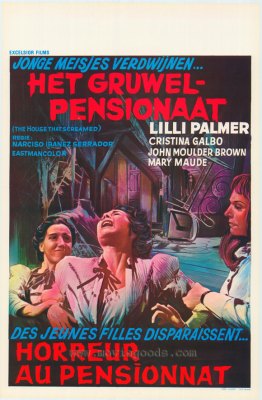 The House that Screamed (1969)
A lavish Spanish production much more in the style of Henri-Georges Clouzot than, say, Jess Franco, this is a real find, an underrated, virtually forgotten thriller undeserving of the pithy treatment given the picture by Elvira & Co. Though its denouement is a disappointment, it's a class production all the way though the poor if letterboxed transfer hardly does the film justice.

The picture, released in Spain as La Residencia ("The Residence"), may have been an influence on Dario Argento's Suspira (1977); both are set at an all-girl academy and Lilli Palmer's icy headmistress, Mme. Fourneau, is very much like Alida Valli's similarly austere character in Argento's picture. Set in late-19th century France, the story mainly follows new girl Theresa (giallo star Cristina Galbo), the daughter of a single-mother cabaret dancer (and/or prostitute), shipped off to the boarding school Fourneau runs with an iron fist.

Theresa adjusts to her new life fairly well all things considered, though sadistic head girl - and coded lesbian - Irene (Mary Maude, whose looks suggest Barbara Steele) plots to humiliate her. Meanwhile, Isabelle (Maribel Martin), in love with Fourneau's teenage son, Luis (John Moulder-Brown) is brutally murdered, her throat cut, but as her body never turns up it's assumed that the girl has merely run away. Later, Theresa likewise befriends Peeping Tom Luis after he's trapped in a boiler room vent trying to get a looksee at the girls taking showers, but soon thereafter plans to run away herself to escape Irene's brutality.

Directed by Narciso Ibanez Serrador (Who Can Kill a Child?), The House That Screamed surprisingly was condemned in Phil Hardy's Encyclopedia of Horror Movies as "cynically sexploitative" and "offensively misogynist." Beyond the irony that Hardy's book heaps mounds of praise on many of Jess Franco's inept and far more crassly-made horror-sex films, the reality is The House That Screamed is almost too restrained and tasteful for its own good. It's certainly nothing like Hardy's book suggests: though ultimately downbeat the picture is nearly as Victorian as its setting - the girls even take showers demurely clothed in undergarments.

After a slow start, the film builds to some enormously atmospheric set pieces that are genuinely creepy, approaching in the style of Jack Clayton's The Innocents (1961) and Robert Wise's The Haunting (1963). Key to this are the film's stunning Franscope cinematography and Waldo de los Rios's moodily effective score. Manuel Berenguer's (King of Kings, 1964's The Thin Red Line) camera backwardly tracks through the school from room-to-room a la Stanley Kubrick, and the superb lighting exemplify the obvious care that went into the production.

Maneater of Hydra looks awful. Filmed in Techniscope, it's bad enough that the film is panned-and-scanned and that the transfer probably dates back to the early-1980s. Worse, it's derived from a battered 16mm television print complete with splices, a few jumps, and distracting reel change cues. The image is soft and murky with terrible contrast. In one daytime scene, several of the characters are wearing white shirts, which are so "hot" that they shimmer like the Planet Krypton wardrobe in Superman (1978). Particularly bad is a videotape "tracking" issue throughout the picture at the bottom of the frame. At least the nearly 88-minute film seems complete or nearly so; it even includes the original European exit music, running about a minute-and-a-half.

The House That Screams seems to have originally aired on Movie Macabre in a panned-and-scanned version, but what's presented here is fully letterboxed, albeit not 16:9 enhanced. Where this transfer was located is anyone's guess: the titles are in Spanish (and bear the title La Residencia, not The House That Screamed) and in one scene a letter, likewise in Spanish, is translated via subtitles. The English-only audio is very poor, muddy and frequently distorted, and the letterboxed image is well below par as well, soft and fairly murky, though at least the original Franscope (2.35:1) screen shape is retained.

Running times for the film vary between 76 minutes (possibly the original U.S. theatrical version) and as long as 104 minutes. This cut runs 97 minutes but clearly is missing at least one full (and probably key) scene that presumably covers Theresa's first meeting with Luis. As it is, she finds him trapped in the vent then the next thing we learn they've been seeing one another for several weeks.

As with previous Movie Macabre releases, viewers have the option to watch the film all by itself, without Elvira's segments. Even so, the film still abruptly and artificially fades in and out where these segments would be. The mono audio on both films is below average. There are no subtitle or alternate audio options, and no Extra Features.

Both films are surprisingly good, but the condescending treatment given them by Elvira and the piss-poor transfers is disheartening. The rights issues on the two movies are unclear: Maneater of Hydra was an Allied Artists release in the U.S., The House That Screamed was AIP. Whether they were legitimately licensed by the current rights hold or whether they've fallen into presumed public domain is unknown to this reviewer, but hopefully someday a Mondo Macabro, Image, or Dark Sky-type label will give these films the first-rate treatment they deserve.