MGM // PG // September 11, 2007
List Price: $14.98 [Buy now and save at Amazon]
Review by Stuart Galbraith IV | posted September 18, 2007 | E-mail the Author
After a decade dabbling in other genres, director-writer-producer and would-be special effects whiz Bert I. Gordon returned to his favorite subject (if not quite metier) with The Food of the Gods (1976), a terrible but moderately entertaining sci-fi thriller "based upon a portion of the novel" by H.G. Wells. Strange, bubbling goop resembling pancake batter inexplicably causes gigantism among various animals (chickens, wasps, rats), a subject Gordon, or "Mr. B.I.G." as some like to call him, had been flirting with for years. Like all of Gordon's films, the special effects are generally awful though scattered shots in this production are surprisingly effective and well-executed. Unfortunately, Gordon also wrote the screenplay, and it's even worse than the special effects. 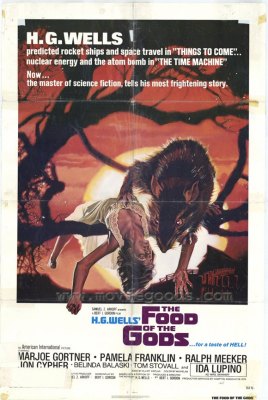 Filmed on picturesque Bowen Island in British Columbia, Food of the Gods opens with three football players on a hunting trip: Morgan (Marjoe Gortner), Brian (Jon Cypher), and Davis (Chuck Courtney). Alone in the thick forest, Davis is killed by a giant (and because of the sloppy effects, transparent) wasp, whose sting equals that of 250 normal-sized creatures. Morgan, looking for a phone to contact authorities, stumbles upon a remote farm owned by Mr. and Mrs. Skinner (John McLiam and Ida Lupino), religious types who've stumbled upon the strange substance that, mixed with feed, causes their chickens to grow to about 10 feet in height.

In the first of many curious scripting choices, Morgan is annoyed that Mrs. Skinner's chickens have nearly pecked him to death, but seems to regard the big critters as nothing more than unusually large poultry. He never says anything like, "Holy crap! Giant chickens!" Instead, he and Brian simply take the ferry back to the mainland to await the autopsy report on Davis.

Meanwhile, ruthless businessman Jack Bensington (Ralph Meeker) and his acerbic scientist assistant Lorna Scott (Pamela Franklin, a welcome presence but underutilized) visit the farm initially doubtful about Mr. Skinner's claims but then eager to buy up all rights once they see the power of The Food of the Gods. (Mrs. Skinner keeps the stuff around the kitchen in jars labeled "F.O.T.G.," just in case anyone forgets the name of the movie they're watching.) Mr. Skinner, however, has already been eaten by a growing army of giant voracious rats that also threaten stranded vacationers Thomas (Tom Stovall) and pregnant girlfriend Rita (Belinda Balaski). Morgan and Brian, returning to the farm in search of more clues, arrive just in time to find the island under siege.

Of director Gordon's 21 features, more than half feature gigantism in one form or another. The unpretentious, straightforward Earth vs. the Spider (1958) is probably his best such film overall, though The Amazing Colossal Man (1957) and Attack of the Puppet People (1958) have interesting ideas and performances, while King Dinosaur (1955) and Village of the Giants (1965) are especially bad. Food of the Gods, a tax shelter production, falls squarely in the middle of the pack: probably inspired by the unexpected success of Willard (1971) and its sequel - there's even a white rat leader, as in that film - it nonetheless is very much like a Bert I. Gordon movie of the late-1950s. One almost expects Gloria Talbott or Peter Graves to turn up.

Unlike Gordon's 1977 follow-up, Empire of the Ants, which had worse effects but a more coherent narrative, Food of the Gods is as lumpily constructed as the F.O.T.G. itself, whose presence is never explained. Mr. and Mrs. Skinner share not a single scene, and while the substance may represent some kind of revolt of nature or the byproduct of man's pollution, it seems to be a naturally occurring, if highly unusual phenomenon.

The structure of the film is very odd, with characters traveling back and forth (or not) between locales for no particular reason. Morgan and Brian casually go back home after their friend's mysterious death only to return to the island later, and while Thomas and Rita frantically try to flag down cars for help when their camper is stranded, once Morgan and Brian offer to help, the couple opt to stay put, ostensibly so that the rats can attack them.

Tough guy Ralph Meeker (Kiss Me Deadly) is cast against type as an insatiably greedy coward. The character is outrageously over-the-top, a veritable Dr. Smith (from TV's Lost in Space) though Meeker seems to be enjoying what for him was an atypical role. The dialogue is awful, but Meeker's character delivers the film's best (and virtually only deliberately funny) line: "Mrs. Skinner, is there anything you didn't feed the food to?"

Back in the 1950s, most of Gordon's effects were usually achieved through stationary mattes, with big bugs and the like on one side of the screen and the human characters rigidly on the other. At other times, Gordon's monsters would be superimposed over other footage, appearing transparent and ghostly. Neither of these techniques was convincing, and others using the same technology achieved far better results. Rarely was there any real SPFX-generated interaction between the human characters and the monsters; Gordon rarely used miniature sets, and almost never oversized props.

By contrast, Food of the Gods uses lots of well-designed full-sized and moderately articulated props: lots of rat heads and bodies, a big rooster head, giant worms, and a couple of big wasps. These were constructed by Tom Burman and, apparently, an uncredited Rick Baker. They come off reasonably well, and scenes where the rats attack characters en masse are very nearly unsettling. In both this and Empire of Ants, the camerawork is hand-held and deliberately shaky, an obvious attempt to hide the fakery. Gordon's photography of real rats is much less successful; they look almost cute, and you can't help but feel sorry for them as they're tossed into a big pool of water for the climax, in which a singularly puny dam is blown up in an effort to kill the oversized creatures. When the rats are picked off with rifles and shotguns, it looks like Gordon zapped 'em with little red paint balls or maybe little squirts of ketchup. The rodents don't look too happy in these scenes.

The miniature of the Skinner's cabin isn't remotely convincing and some of the mattes are poor, but a couple shots unexpectedly work quite well, particularly one where the rats charge the farm from a service road, and later when they surround the house during the flood, when the main characters are making a last stand on its roof.

The Food of the Gods is presented in an excellent 16:9 enhanced transfer at 1.78:1 that approximates its original 1.85:1 theatrical release. This reviewer hadn't seen the picture since it aired in television syndication (on "The 4 O'Clock Movie") and it sure looks better here than it did way back then, with Reginald H. Morris' (director Bob Clark's favorite DP) cinematography coming off pleasant if unremarkable. The Dolby Digital mono is adequate; alternate Spanish and French audio tracks are included, as are English and Spanish subtitles.

The menu screen looks amateurish, like something a 12-year-old would create on his PC for a school project. It features a postage stamp-size reproduction of the original one-sheet. There are no Extra Features, not even a trailer.

Rotten as Bert I. Gordon's movies generally are, there are those (like this reviewer) who hold an affection for them anyway. They're frequently ridiculous (I mean really, big chickens?) but in their own goofy way enjoyable, and the flood of Midnight Movies this year from MGM and Fox is most welcome. For classic and cult sci-fi fans, this is Recommended.