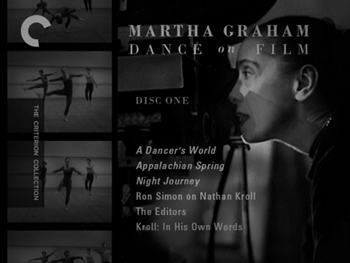 Dance is an art form I've always meant to learn more about. Ever since my first year in college when, in a near simultaneous intersection of events, a date took me to a dance recital on campus and I developed a crush on a pretty dance major who lived upstairs from me in the dorm (she didn't perform at that recital, which would have made for a far more dramatic anecdote). Through the years, I've dipped my toe in once or twice, including seeing live ballet. I was impressed with the athleticism on display in ways I've never been touched by professional sports, intrigued by the idea of one's body as a tool of expression. Yet, I've never gone full bore into studying the craft.

I explain this by way of indicating that when it comes to my approaching Criterion's new DVD Martha Graham: Dance on Film, I do so pretty much as a neophyte. Though I knew who Martha Graham was before viewing this double-disc set, it was only a passing knowledge, a name dropped in various contexts, the answer to a trivia question. Ever one for a cinematic adventure, however, I took this review opportunity as my chance to finally expand my understanding of the person behind the name.

Martha Graham: Dance on Film is a collection of three programs the legendary choreographer made with producer Nathan Kroll for public television between 1957 and 1961, when Graham was already in her sixties. Luckily for people like me, the very first program, A Dancer's World (31 minutes), was actually designed to be an introduction to Graham and her work. Sitting backstage, applying her make-up for a performance, Graham speaks to the audience about different aspects of the art, which are then illustrated in specially choreographed numbers performed by her world famous dance troupe.

Taking A Dancer's World alongside Martha Graham: The Dancer Revealed (54 minutes), the 1994 American Masters episode included on DVD 2 as a bonus feature, I felt like I had a good foundation laid down for me to better understand what I would be viewing in the other two performance pieces. As it turns out, I was more familiar with Martha Graham's pioneering work in interpretive dance than I had thought. As a pop culture junkie, I had seen her influence all over classic musicals, MTV videos, and even regularly parodied in comedy shows. If you've seen a comic actor do a flailing dance in his or her routine, chances are it's Graham who is being skewered.

The Martha Graham style uses movement to express emotion and abstraction to tell a story. Spasmodic gestures, limbs bent at right angles, swift rising and falling--these are all elements instantly recognizable as Graham choreography. Yet, there is also much more to it than that, a synthesis of setting and music, both acting as props to support the dancer rather than being separate elements. Graham dancers aren't as concerned about working with the beat of the music or following the melody as other troupes might be, the orchestration seems to work like that of a silent film, providing background but not integrated wholly into the action.

The second and third films on Martha Graham: Dance on Film - Criterion Collection are documents of two of her signature pieces. Appalachian Spring (32 minutes) is the story of a pioneer wedding on the American prairie. Dance is used to emphasize the ritual and ceremony of a religious union, as well as showing the demonstrative aspects of personal worship. Working with the stark sets of her regular designer, Isamu Noguchi, and buoyed by Aaron Copland's original score, Graham and her company create a full narrative, complete with multiple characters and a beginning, middle, and end of the story. I can't profess to understand it all in its entirety. In fact, the bonus feature put together by dance expert Deborah Jowitt, a thirteen-and-a-half minute comparison of the 1958 Appalachian Spring with a performance from the mid-1940s showed me how much I really didn't get upon first viewing. Showing the clips from the same portions of the two performances, Jowitt explains how subtle changes in the choreography alter the meaning of the piece. Also, since the earlier performance was shot by one camera from one angle in a theatre, she notes how the editing and the framing changes the viewer's perception of a piece by focusing the eye on particular elements of the action rather than taking in the entire stage at once. It made me wish that Jowitt had recorded full commentaries for the three films so I could learn even more about what I was seeing.

Still, even without that detailed of an explanation, I was captivated by Appalachian Spring and the final piece, Night Journey (29 minutes), a retelling of Jocasta's death from Sophocles' Oedipus. The combination of costume, music, and movement may be mysterious and difficult to penetrate fully, but that doesn't make it boring. In fact, it's the desire to decode what Graham is doing, along with the power of her artistry and craft, that will keep you watching. The performances aren't stodgy or outdated, but as alive and fresh as all good art is supposed to be. 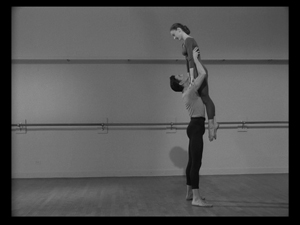 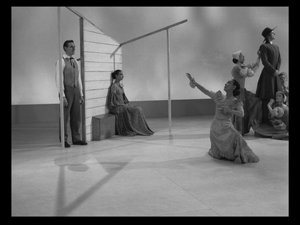 Video:
The three television programs presented on Martha Graham: Dance on Film - Criterion Collection are shown in a full screen format, preserving their original 1.33:1 aspect ratio--though, they are pictureboxed, meaning your will see black bands on all four sides when watching on a widescreen monitor. The source material Criterion found for these new digital transfers must have been very well preserved, or someone did a lot of work, because these shows look pristine, with clean black-and-white images that lack any surface noise or resolution problems.

Sound:
The soundtracks are in mono, and mainly music. The audio is as clear as the image, and it all sounds really good.

Extras:
In addition to Deborah Jowitt's comparison featurette, DVD 1 has several other bonus features, including one other specific to Appalachian Spring. In a five-and-half minute segment from a TV documentary on Aaron Copland, the composer talks about working with Graham and incorporating Shaker melodies into the ballet.

DVD1 also has extras related to the making of these films. The thirteen-minute interview with Museum of Television and Radio curator Ron Simon explains how producer Nathan Kroll redefined how the arts were represented on television and his role in the creation of a national unification of public stations. Kroll himself explains what it was like to work with Martha Graham in a visual essay he recorded in 1995 for Criterion's laser disc release of these films. His audio narrative is combined with pertinent photos of the period as he relates stories about the productions and what it took to get Graham to participate. Similar stories are shared in the interviews with the film's editors (13:45), Miriam Arsham and Eleanor Hamerow, who both discuss the challenges specific to editing this kind of material.

DVD 2 is entirely supplemental material, with the main one being the aforementioned American Masters episode about Martha Graham. New interviews with six of her dancers go further in depth about the making of the programs gathered here and what it was like to learn dancing from such an remarkable teacher. These thirty-one minutes are a nostalgic look back at what it was like to be part of the company at the time, whereas the eleven minutes of 16mm silent footage from the troupe's 1954 European tour show it as it really was, both off the stage and on, including some pieces of their performance of Night Journey. In the interviews, all the dancers have interesting stories about how they started dancing and joined Martha's group. Asian American dancer Yuriko is perhaps the most interesting, traveling to New York after being released from an internment camp after World War II and working her way up from being a seamstress to becoming one of Graham's students.

Almost like an update to A Dancer's World, the fifteen minutes of excerpts from a 1975 instructional film on technique show dancers preparing to dance and demonstrating different moves and stances accompanied by explanatory narration from Graham.

FINAL THOUGHTS:
Recommended. Martha Graham: Dance on Film - Criterion Collection is a fascinating snapshot of the legendary choreographer's innovative work and a primer for anyone interested in finding out more about modern dance. Gathering together three vintage television programs, we receive a tutorial from Graham herself and see her perform in two of her most famous ballets. It's not light viewing in some ways, but it is a mesmerizing combination of image and movement, music and design, that is never boring and that intrigues while it inspires. Well-chosen bonus features make this a two-disc set that educates while it entertains, creating a greater understanding of its subject. I certainly am feeling I should finally get off my duff and further explore the world of classical dance, and hopefully it will cause you to want to do the same. 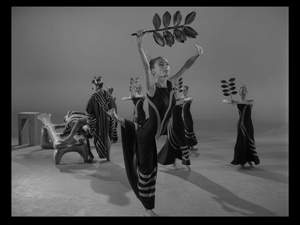 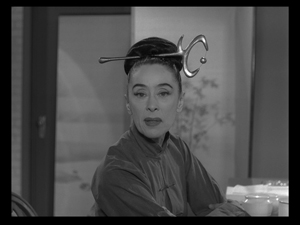