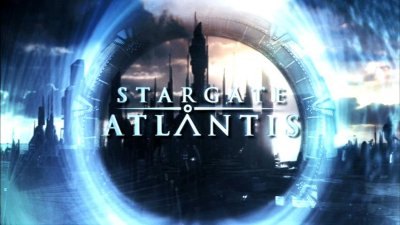 Stargate Atlantis is a spin-off series from the popular science fiction television series Stargate SG-1. "Atlantis" is set in the Pegasus Galaxy, a remote corner of the universe, where a new team of scientists and military personnel follow leads about the ancients and face a new terrible foe called the Wraith. The spin-off series has been quite successful and later this year will begin airing its fourth season. For more details about this series, please refer to DVD Talk's reviews of the pilot episode, season one and season two.

The third season picks up with the aftermath of between a shaky alliance between the Wraith and Atlantis crew. In season two, Carson was in the process of perfecting a wraith-retrovirus that would convert wraith into humans. Their first real success was on a subject named Michael, who after learning what was done to him turned on his human "friends". Along with Michael came an unlikely opportunity, the humans joined a small cadre of wraith in a temporary alliance. That alliance was, however, betrayed and resulted in a massive battle. In the aftermath, Dr. Weir goes against the powers that be to save her crew, including Sheppard, McKay, and Ronon. The events led to another unlikely alliance with Michael. It is a pretty exciting way to start the season.

Season three also sees the introduction of the Asuran. In "Progeny", the Atlantis team stumbles upon a race they believe to be descendants of the Ancients. They, however, find the Asuran are a new, yet familiar, breed of evil. They are an advanced form of replicators that were created by the Ancients. The Asuran turned against their creators and want to see the destruction Atlantis and the human home world. They reappear in the mind-altering "The Real World", the exciting two-part episode "The Return", which has General Jack O'Neill and IOA representative Richard Woosley, and the intense season finale "First Strike". 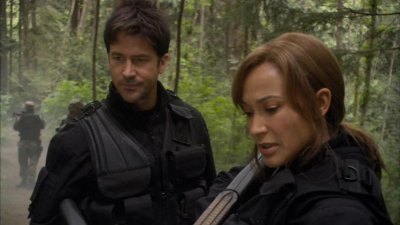 The Genii are also at the fore and continue to be a pain in the Atlantis team's butt. In "Common Ground", the team responds to a Genii distress signal and travels through the stargate. On the other side, they encounter renegade Genii commander Koyla. He takes Sheppard hostage and uses a wraith to slowly kill him. In exchange for Sheppard's life, Koyla wants Ladom, the man who betrayed Koyla to take over the Genii government. This episode is pretty exciting because Sheppard is forced to make friends with a wraith and a startling new discovery is revealed about the gruesome race. Koyla and the Genii return "Irresponsible", which also sees the return of annoying-as-hell guest star Lucius Lavin (season three episode "Irresistible" -- Lucius uses his "charm" to take over Atlantis).

Beyond episodes and storylines that tie into old and new bad guys, the season has some plain old fun episodes. One example is "McKay & Mrs. Miller". It is a solid episode with McKay and his sister, Jeannie. Rodney and his sister have not spoken in the last four years. She gave up a great career in theoretical physics to be a stay at home mom. Their relationship changes, for the better, when Jeannie's latest work catches the attention of the government. Rodney is sent to make amends and recruit her into helping with the latest Atlantis project. It is a fun episode with the two characters having a great chemistry together.

"Sunday" is another strong episode. It is not "fun" in the least, but still a huge development for the series. Dr. Weir decides it is time for everyone in Atlantis to relax and imposes a mandatory day off. The episode trails the lead cast trying to relax and find something non-work related to do. However, the relaxing day goes belly up when an explosion in the mess hall takes three lives and puts everyone else at risk. The reason this episode plays such an important role is that it sees the death of one the show's main characters.

Overall, Stargate Atlantis's third season follows the solid pace set in earlier seasons by providing a good balance of action, science-fiction, suspense, and drama. In particular, revisiting the wraith plotline with Michael, the renegade Genii and Koyla, and the new villainous replicator race leave the season full of exciting directions and possibilities. The show's cast continues to be stellar together and the writing topnotch. In the end, season three of Stargate Atlantis is a must for fans. 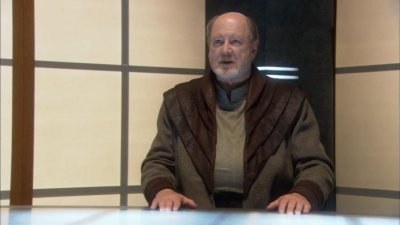 1. No Man's Land: In the third season opener, Sheppard's ship vanishes during a space melee against the Wraith. Meanwhile, Weir is recalled to Stargate Command as Colonel Caldwell leads a mission to keep the Wraith from reaching Earth.
2. Misbegotten: Woolsey travels to Atlantis to evaluate Dr. Weir's leadership. Meanwhile, Dr. Beckett and Sheppard are at odds over what to do with the former Wraith transformed into humans by the retrovirus.
3. Irresistible: The team searches for stargates to harvest for an intergalactic bridge, and encounters a charming alchemist who beguiles Dr. Beckett.
4. Sateda: While on an exploratory mission, Ronon is taken prisoner by villagers who made a pact with the Wraith. Meanwhile Sheppard and Teyla rally the team to rescue their comrade.
5. Progeny: An advanced civilization is accidentally discovered during the team's investigation of a purportedly abandoned Ancient testing site, promoting Weir to broker an alliance with the society's leader, Oberoth.
6. The Real World: Dr. Weir has a rude awakening in a psychiatric hospital on Earth, where she is told that her memories of Atlantis are delusions.
7. Common Ground: Sheppard is captured by a Genii commander and imprisoned beside a Wraith, who becomes a tool in negotiations to release Sheppard, as well as an unlikely ally, for his escape.
8. McKay & Mrs. Miller: McKay returns to Earth to enlist his sister's help with an Air Force experiment, producing a surprise visitor.
9. Phantoms: A mission to recover a lost team leads to the discovery of a discontinued Wraith experiment: a mind-altering device that adversely affects Ronon and Sheppard.
10. The Return-Part 1: Ancients journey to Earth and request that the Stargate team vacate Atlantis, a scenario that scatters the team and presents General Landry with a quandary.
11. The Return-Part 2: The team tries to rescue General O'Neill and Richard Woolsey during the Asuran occupation of the outpost.
12. Echoes: Teyla sees a strange "woman in white" in Atlantis as the sea creature that saved Rodney from the puddle jumper crash resurfaces, signaling a new threat to the outpost.
13. Irresponsible: The team encounters Lucious, who uses Ancient technology to assume the role of protector for a besieged village.
14. Tao Of Rodney: Rodney is hit by an energy bean from an Ancient device and begins to exhibit heightened senses and telekinesis. The team discovers that the device was used to accelerate ascension, which may kill Rodney in the process.
15. The Game: Sheppard and McKay compete in a civilization-building simulator they've discovered on Atlantis, which may turn out to have serious consequences.
16. The Ark: Survivors are revived from suspended animation in a space station, but problems from their past come back to haunt the team.
17. Sunday: Trying to relax on a rare day off, an explosion on Atlantis develops into an emergency situation with dire results for one of the expedition's key members.
18. Submersion: An underwater mission has the team searching for an alternate power source in the Atlantean ocean.
19. Vengeance: The team encounters an old enemy while searching for one of their allies, and uncovers a plot to engineer a race of powerful monsters.
20. First Strike: The Apollo, a new Earth ship, arrives at Atlantis under the command of Colonel Abe Ellis, whose missions could start a war, and endanger the station in the process. 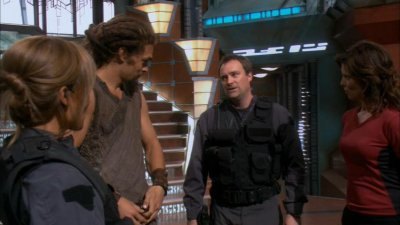 Audio:
The audio track in this release is in English 5.1 Dolby digital surround and a dubbed track in French Dolby surround. In general, the sound quality is very good and it provides an audible and clean track. The dialogue is usually a little flat while music and sound effects come off rich and vibrant. Additionally the 5.1 track is dynamic and makes good use of the surround sound capability.

There are subtitles included in English, Spanish, and French, as well as support for closed captioning. Note French subtitles are only available on select episodes.

Extras:
Stargate Atlantis: The Complete Third Season comes packed with special features. There are a total of nineteen audio commentaries (no commentary for "The Real World"), ten photo galleries, five featurettes about select episodes with its respective director, and five featurettes about different aspects of season three. Here is the breakdown of extras: 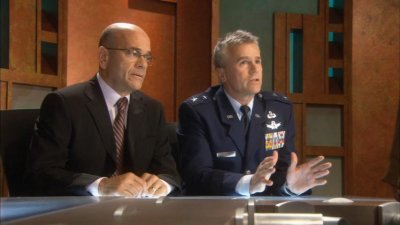 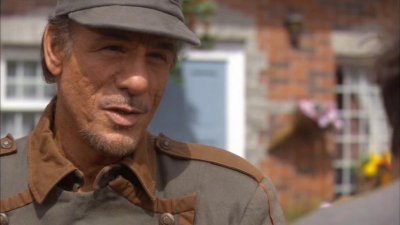 Final Thoughts:
Stargate Atlantis is a successful spin-off series of Stargate SG-1. Set in the Pegasus Galaxy, the Atlantis team faces foes unlike any other. In season three, the heat gets turned up a notch with three massive foes to contend with, which include the life-sucking wraith, the renegade Genii, and a powerful replicator race. The plotlines deal with these three bad guys and they offer some compelling tales. The season also includes some great all-around episodes and developments for the cast. In the end, this season is one you do not want to miss out on.