Sarah Silverman Program - Season One, The 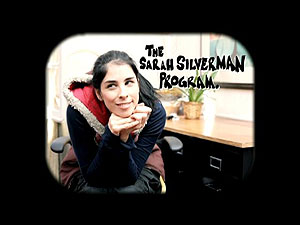 
The Show
If you've seen Sarah Silverman's film Jesus is Magic you have a good idea about what to expect from her series, namely some songs, some very un-PC comedy and a whole lot of twisted "ain't I cute" moments. What you might not expect is a pretty solid supporting cast that helps make the show a great Earth-2 idea of a sitcom. After all, when was the last time you saw a sitcom about a woman getting high on cold medicine, getting bored enough to get a recreational AIDS test and hooking up with God?

The first season of the series is a rather short one, checking in at just six 22-minute episodes, but that's plenty of time to make an impression. As Silverman's slacker character sponges off her nurse sister Laura (her real-life sister), and brunches with her gay neighbors Brian (Brian Posehn) and Steve (Steve Agee), it becomes quickly clear that the show has no interest in things like story and character development, instead embracing surreal comedy and nonsensical situational humor. There's certainly nothing wrong with that, especially when it results in ridiculously funny scenes like her AIDS awareness rally in "Positively Negative" or her unfortunate attempt to pass gas. 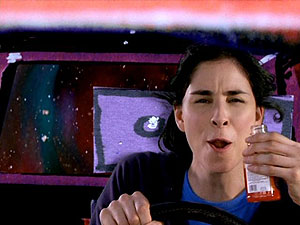 In watching these episodes, I got a real "Mr. Show" feel from it, probably in large part due to the presence of several cast members, including Jay Johnston as Laura's boyfriend and cameos by Jill Talley and Paul F. Tompkins, and some small references. But there's also the show's anything-goes attitude, which allows bits like the running gag about TAB or Silverman's silly queef run work in the context of the show. Each episode is relatively straightforward in its construction, but has moments of odd randomness that are among the funnier segments, many of which involve the show's great guest stars like Zach Galifianakis, Fred Stoller, Larry Hankin and "Heroes"' Masi Oka. When Sarah is walking down the street, apparently delivering a monologue, only to reveal an unexpected companion, it's another example of making "shock" comedy work by making it feel natural in this world.

The best part of the show, at least in the eyes of your humble reviewer, is the presence of Brian and Steve, the most unlikely gay couple to hit TV. Any scene they are in is instantly better than the others, mainly because they are silly and hilarious when they are together. While I've been a fan of Posehn for quite a while, Agee was an interesting find, playing Steve as the straight man of the group. I realize I'm repeating myself, but his part in the TAB war of "The Muffin' Man" is brilliance, shared with Posehn, as he's subtle yet broad, and perfect for the tone of the series.

Of the short six-episode season, the best episode is the finale, "Batteries," which interestingly was shot as the pilot. Sarah can't get sick kids off her TV because her remote dies, which sends her on a quest for batteries that is beyond convoluted and involves a handicapped marathon and a wish granted by God. When you consider the crap Kathy Griffin got for her joke about God at the Emmys, it's amazing that Silverman could get away with what she does here. But after her episodes about AIDS, homosexuality and abortion, not to mention the whole Jesus is Magic thing, it's not a huge leap for her, and when she flashes that Qpie-doll gosh-gee smile, there's not much she can't get away with. 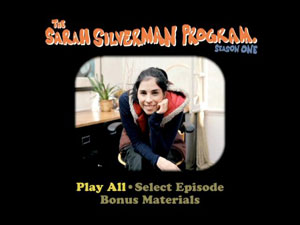 The DVD
The first season of "The Sarah Silverman Program" is a one-disc release (plenty of room for the six 22-minute episodes), packed in a standard-width clear keepcase with a two-sided cover that has episode descriptions. The disc features a sweet retro-styled set of animated full-frame menus that offer a choice to play all the episodes, select episodes and check out bonus features. There are no audio options and no subtitles, but the episodes do have closed captioning.

The Quality
The full-frame transfers on these episodes are nice and clean, presenting the show with bright, vivid color and a good deal of detail, though the whole image has a sense of softness that's just part of the look of the show. There are no obvious digital artifacts noticeable in the video nor is there any dirt or damage. Overall, it's a tight visual presentation that's better than it looks on TV.

The audio is delivered in Dolby Digital 2.0 tracks that are your standard TV sound. The dialogue is crisp and distortion-free, and the music, a big part of the show, comes off strong, though there's nothing dynamic about the mix.

The Extras
The big bonus on this disc is a collection of commentaries. There's actually more commentaries than episodes, even though the final episode has none, with three groups of commentators participating. Laura Silverman and Johnston provide two tracks, Sarah Silverman, writer/director Rob Schrab and executive producer Dan Sterling throw in two more, and Brian Posehn and Steve Agee are on the final three. Of the three groups, Posehn and Agee deliver the best commentaries, bringing a good amount of enthusiasm and a solid chemistry that results in three fun chat tracks, while Laura Silverman and Johnston are a bit of a disappointment, coming across as a bit too laid-back.

A selection of short musical performances by Sarah and Laura Silverman and Steve Agee are available to listen to separately or all 13 at once. These are OK, but they wore their welcome out relatively quickly due to their unstructured format. These were previously available on the Comedy Central web site, but are packaged here in better quality. In a similar vein are the eight songs presented in Karaoke (no lyrics, on-screen words) and Sing-a-long (on-screen words only) versions. Again, the appeal here is limited, but if you like Silverman's singing, here's more of it.

The remaining real extra is a trio of "storyboards," two of which were pitches for an alternative intro sequence, one done in green screen, while the other plans out the chase from the season finale. There's also some Comedy Central Quickies ("South Park," "The Colbert Report," and "Reno 911!") and some DVD previews (one being "The State" (ohh yeah.)) 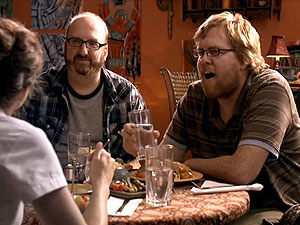 On the Hunt
There's at least one easter egg on this DVD, and it's not too hard to find.

The Bottom Line
"The Sarah Silverman Program" is a rather unusual sitcom, sharing more in common with "Tenacious D" than your traditional half-hour comedy, and feeling like trial-sized versions of Silverman's film. It's probably the ideal format for her somewhat abrasive style, as she can work her songs in with her offensive material and still come off as adorable. The DVD looks and sounds very nice, and the hefty dose of commentaries, along with the other supplements, help make up for a slim volume of episodes. Fans of her comedy should definitely check this out, but should keep their expectations relatively low for the added material if you've seen the show already.