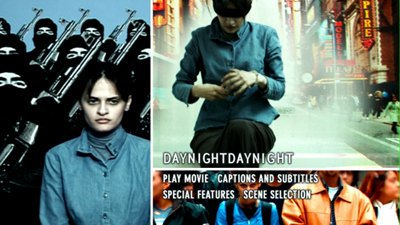 Some movies are so daring in concept, it's hard to tell what to make of them. By taking a political or storytelling risk, a director can invite various levels of judgment, causing his or her artistic intentions to be scrutinized as the audience struggles to figure out just what it all means.

Day Night Day Night is just such a film. Written and directed by Julia Loktev, who previously had only made a 1998 documentary called Moment of Impact, it's the kind of film where after watching it once, I am not really sure I can say what I thought of it. My opinion changed moment to moment throughout the movie, and it's likely to change multiple times before I finally put this all to rest.

Day Night Day Night is the story of a nameless young woman, played with spotless conviction by newcomer Luisa Williams, who is preparing to become a suicide bomber. There is no explanation of where she comes from or whom she is involved with, nor any clear statement of what her political intention is or what god she prays to during her soul-searching sessions. She steps off a Greyhound in New Jersey, is shuttled to a hotel room, and grilled by three men before being loaded down with explosives and put on a bus to New York City. There, her intention is to detonate the bomb in Times Square.

Very little is revealed by way of personal details. Day Night Day Night is largely about the preparation, the build-up to the event. The men all wear masks, speak without accents, and keep the girl on focus through an endless barrage of quizzes. If they are not with her, she sits in darkness, endlessly fidgeting and cleaning herself. This section of the movie, which takes up the first 2/3 of the running time, is impossible to turn away from. It's like an agitated study in normalcy. Though, thanks to the sound editing choices, Loktev nearly had me reaching for the eject button. I don't know why she decided to mic' everything up the wazoo and crank the ambient noise to Spinal Tap-levels of volume, but the experience is grating. There is no need to hear crust scraping against cardboard as the girl removes a slice of pizza from the box. You'll actually start to cringe every time she picks up a piece of food, because the sounds Loktev captures are disgusting. I think she might have placed some kind of miniature microphone in Williams' throat from the oceans of saliva that came flowing over my speakers.

I suppose the director was preparing us for the sound trick she employs in the moment of truth, which is one of the most gut-wrenching scenes I've seen in a movie in quite some time. Dropping the sound down to just the barest hint of Luisa Williams' breathing, you'll realize you yourself are holding your breath. Unfortunately, once we are there in Times Square playing the "will she or won't she?" game, a lot of the other pieces of Day Night Day Night's final reel don't really work.

The main problem is Loktev's decision to try to make her faithful fanatic absent of background or past. My guess is that we are intended to fill in the blanks, making her an everywoman that we can all identify with, but it feels more like a copout to me. This kind of character can't be anyone, because they never are just anyone. On the same note, a film can't put us in this person's shoes, either, if the director stays this far away from the subject. The two pieces of personal information we get about the girl are lame tricks, and if you take a second with the first tidbit, you'll be able to sort out what the second one is in no time. That's how cheap a shot it is.

It would have been nice to have seen Julia Loktev put a little more weight in the script. She could have easily hefted that weight onto her actress' shoulders, and I have no doubt Luisa Williams could have carried it. She's very, very good in the role, and I don't think it would have been too tough for her to show the viewer the source of her character's convictions. By not letting her do so, by not taking a stance, Day Night Day Night comes off as hollow. It's very successful in avoiding saying anything about who its terrorists are, but without doing so, it ends up saying nothing at all. How can we believe the bomber has put her faith in something, when the filmmaker has chosen not to put her faith in us to understand?

Or maybe Loktev has too much faith in us to figure it all out. I'm not really sure. Which is also probably part of the point, to shake up what we think through what we see. In that sense, Day Night Day Night is worth at least a look. I have a feeling its impact will vary from viewer to viewer, and you'll never know how it will hit you until you give it a spin. 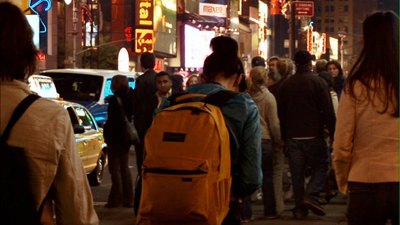 Video:
This widescreen presentation of Day Night Day Night, enhanced for 16X9 televisions, is a good-looking transfer of a digitally shot movie. The colors and the surface look of the film are stark, with a documentarian's eyes for realism (at times, on the streets of New York, you can see gawkers in the background who clearly aren't part of the production). I didn't see any problems with dirt or compression.

Sound:
Not much to choose from here, just a basic sound mix in English, purposely done in mono for the early part of the film and stereo in the later part. As I noted, there is an emphasis on sound effects in Day Night Day Night, and since the filmmaker intended them to be harsh and nearly distorted, then job well done. Much of the sound design, and the use of live, authentic effects, is explained in further detail in the commentary of the movie. So, despite having no advanced sound options here, this release actually captures the director's intentions.

Subtitles are in Spanish and English for the hearing impaired.

Extras:
In addition to the cursory theatrical trailer, Day Night Day Night also comes with a full-length commentary by its writer/director, Julia Loktev. It's a detailed commentary, and Loktev explains in depth about the thought and research she put into the script and the technical aspects of the shoot, including color schemes and how sound was captured. Anecdotes about finding Luisa Williams, the construction of scenes, and the balance of good planning and organic filmmaking all get airtime. Given the nature of the movie, this commentary is very fascinating and illuminates much of what Loktev was going for.

Of course, it can also be counterproductive when so much is explained. For instance, with so little exposition to glom onto in the actual script, to then have the director tell us that smaller details are chosen without any greater meaning in mind, it does tend to support the possible interpretation that what we are seeing is really all it the film is and there is nothing more to be taken from it.

FINAL THOUGHTS:
Day Night Day Night is an ambitious movie and I have no reason to doubt its makers had the best of intentions with it. The story of a young American girl who is in training to be a suicide bomber, the film catches up with her just as she is about to fulfill that goal. Free of political and religious detail beyond the revelation that the girl has faith of some kind, this choice to show her preparation as a business-like, dispassionate action feels like a mistake, hollowing any greater meaning out of Day Night Day Night. Still, it is an intriguing concept, ably told and expertly acted by first-timer Luisa Williams. That alone is worth you taking the time to Rent It, even if in the end it might leave you wanting for more. 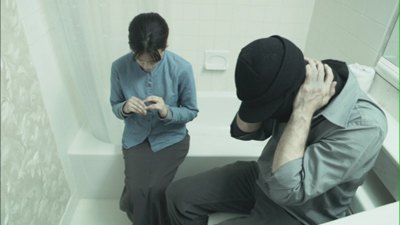