20th Century-Fox will be releasing onto disc actor David Arquette's directorial debut, The Tripper, a phantasmagorical homage to 1960s exploitation druggie movies and 1980s slasher films. Showing a startling willingness to cast his undisciplined directorial net over a wide range of subjects, including the environment, conservative and liberal politics, and recreational drug use, Arquette creates an initially dazzling melange of seemingly disparate viewpoints, which unfortunately grind down to a rather conventional last act of slasher antics and broad, obvious politicizing. Always good to look at, The Tripper delivers the slasher gore goods, while hitting a few of its myriad, scattershot targets. 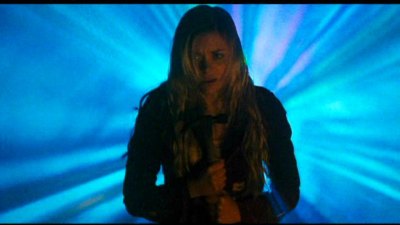 A group of modern-day "hippies" are on their way to a weekend "America Free Love Festival," a rock concert up in the Northern California redwoods where the stoned group hopes to get even more stoned. Van driver and George Bush lover Joey (Jason Mewes), his girlfriend and George Bush hater Linda (Marsha Thomason), hard-core stoner Jack (Stephen Heath) and his seriously blasted coke-head girlfriend Jade (Paz de la Huerta), ineffectual hippie Ivan (Lukas Haas) and his sweet, emotionally damaged girlfriend Samantha (Jaime King) are the Mystery, Inc. drug addicts who respect nothing except a solid buzz. Before arriving at the campsite where the festival is being held, Ivan is struck by a beer bottle (shades of Hot Rods to Hell) thrown by some vicious rednecks, rednecks they later meet up with at a convenience store. Goaded into a fight by Joey, Ivan won't fight until Samantha lands the first punch, but it's local dimwit Gus (Christopher Allen Nelson) who ends the fracas, busting up the head yokel Muff (David Arquette).

Arriving at the campsite where the concert is to be held, the group is warned of trouble by Dylan (Redmond Gleeson), the father of Gus and a crazy old coot who doesn't like hippies in his woods (not to give too much away, but the film's prologue establishes that not only was Dylan's job threatened by "tree huggers," but his wife died and his son became involved in a tragic incident, due to the interference of radical conservationists). Evidently, a hippie's been gutted in the woods, and nobody knows who might have done it. Blowing him off, just like they blow off the hard-assed cop Buzz Hall (Thomas Jane) who also tries to warn them, the merry pranksters decide they're going into the woods to get high and that's that. But soon the body count starts to rise, and Samantha, the only responsible one in the group, is stalked by the killer, who wears a Ronald Reagan mask and tailored suit - along with a very big axe. 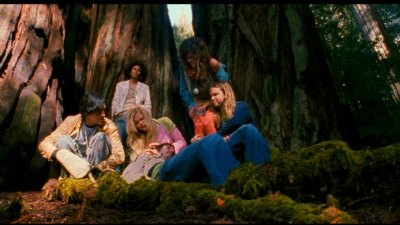 For about the first half hour of The Tripper, I was quite astounded at the palpable atmosphere of giddy homage that Arquette was throwing around, with a seemingly sure handling of mixing 60s drug-out flicks like The Trip, with no doubt countlessly re-run showings of Friday the 13th and Halloween. Variations in film stock, unique lighting effects, and a marvelously assured feeling of place (the woods feel dangerous at first), made me sit up and take notice of this directorial debut. As well, the script showed genuine wit in the deliberately broad one-liners (Joey screaming, "What the f*ck is your problem, man!" as he looks at his chopped-off hand), as well as a deceptively even-handed approach to the political satire (an approach that quickly showed its true colors with an hard left to the left, even ending the film with a torturous audio clip of Robert Kennedy, Jr. droning on in a whine about something or other). The image of a Ronald Reagan clone, running around with an axe chopping up hippie and conservative alike, is a naturally funny iconographic moment; there was always something outsized and organically parodistic about that larger-than-life political character.

But eventually, the sight of Ronnie throwing out one of his catchphrases along with a deep blow to the chest of a screaming victim, wears thin - as do most of the increasingly strained political allusions in The Tripper. The originality of the first half-hour of the film is gradually overtaken with a tepid second act, where the mechanics of the various killings are worked out in the woods, followed by a final act that looks more like the films Arquette is supposedly parodying than he'd probably like to admit. I really admired Arquette's frequently spookily-accurate approximations of 1960s drug exploitation flicks (Samantha's wig-out in the woods after someone shoots acid at her looks and feels exactly like those drive-in classics of old), but soon, even his technique begins to wane in favor of obvious satirical shots. Worst of all, The Tripper can't even get scary enough to gloss over Arquette's rapidly diffused intent. The gore scenes are more than competent (I particularly liked the chainsaw-to-the-neck of the tree hugger at the beginning of the film), but The Tripper's chills are strictly from hunger. And a slasher movie without genuine scares - even if it's a parody - ultimately fails. 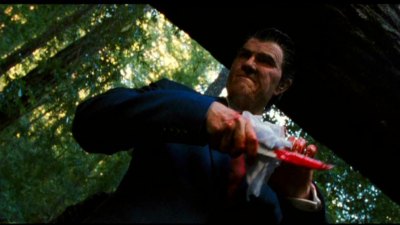 The Video:
The anamorphically enhanced, 1.78:1 widescreen image for The Tripper is quite dark and grainy. I received a screener copy of this film (complete with annoying 20th Century-Fox logos popping up in frame from time to time), so what I'm judging may improve with the street product - or it may be how Arquette wanted the film to look (I suspect the latter).

The Audio:
The Dolby Digital English 5.1 audio mix is incredibly diverse, with ambient forest sounds popping up all over the place, and with full-bodied screams during the killings. English, French and Spanish subtitles are available.

The Extras:
There are quite a number of extras included on The Tripper DVD. First, a full-length commentary by Arquette, Richmond Arquette, Paul Reubens and Thomas Jane is included. Arquette sounds exactly how you'd think he sounds - odd. But he's pretty honest about how the film turned out. Behind the Spleens, a ten-and-a-half minute behind-the-scenes featurette, interviews some of the cast and crew. The Making of Ronald Reagan is a ridiculously brief (less than a minute) look at the makeup effects used to create the Reagan clone. The Missing Finger Incident is a two minute look at how someone on the crew found a finger in the notorious Big Basin Redwoods State Park, where the film was shot (notorious because of the many serial killers who operated there, supposedly). A Sh*tty Situation is an under two minute look at the makeup used to make Paul Reubens look like he was covered in feces. The Tripper Presidential Campaign Tour is a six minute look at Arquette taking the film around the country, with the Presidential Campaign Tour Photo Gallery illustrating that trip. Deleted scenes are included, including what looks to be the original intent of having Joey survive his hand-chomping. They run six minutes. There's a blooper reel, that runs seven-and-a-half minutes long, the original theatrical trailer, and other Fox trailers, as well.

Final Thoughts:
At times startlingly original in its spooky channeling of 60s drug films and 80s slasher flicks, The Tripper starts off quite wonderfully, with plenty of funny quips, a scattershot approach to the satire, and a teasingly opaque directorial intent - which all eventually goes south as director David Arquette gets bogged down in the actual mechanics of the killings, as well as mired in his increasingly pat political polemics. But he definitely has "an eye," as they say in the business, and The Tripper being his first effort, he's someone to watch. Not successful at the end, there's plenty of interesting, entertaining elements in The Tripper to make catching it worthwhile. I recommend The Tripper.