How I Met Your Mother - Season Two 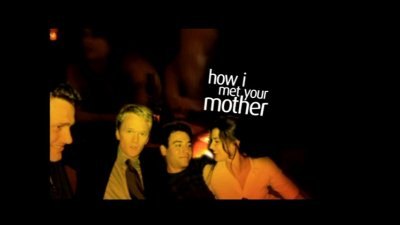 How I Met Your Mother is a CBS television situational comedy (sitcom). It first aired in 2005 and has been a success since its debut. The show is a story told in reverse. The main character Ted in 2030 (narrated by Bob Saget) tells his kids about how he met their mother, and all of the crazy events leading up to that point since 2005. The series is legen... wait for it... dary. (Did you catch that witty Barney reference?) For more details about the show, refer to DVD Talk's review of season one.

The second season of How I Met Your Mother continues with a similar tone to the first season. The show follows a couple dramatic storylines that affect the lives of the cast, all the while doing and saying goofy things. Notably, Neil Patrick Harris repeatedly steals the spotlight as the overzealous, egotistical, and downright fun character Barney Stinson. Honestly, if it were not for Harris, I would rate this show as a fairly generic sitcom. Still, the other leading performers have their moments.

In the close of the show's first season, Marshall's life was turned upside down. Lily was accepted into an art internship. The catch is that it meant spending the summer in San Francisco. Marshall gave Lily an ultimatum, the internship or their relationship. She picked San Francisco. As season two begins, Marshall is approaching relationship rock bottom. Having lost the woman of his dreams, he quickly spirals down a destructive path. While Ted would normally be there for him, he has his own issues to deal with. At the end of season one, Ted realized his feelings for Robin and pursed her (again). In season two, they test out relationship-waters.

As the second season continues, Marshall pines over Lily and the Ted-Robin relationship blooms. The contrast between Marshall and Ted makes for a hearty chuckle, as they are as night and day. Life for Marshall is not all bad. One day he wakes up and understands it is time to move on. He becomes himself again (as much as he can without Lily) and even tries to meet women. These outings are fantastic, with Barney continually stealing the show (and the women!). Then boom! Lily returns from San Francisco and tries to adjust to life without Marshall, which includes getting a dumpy apartment and moving in with Barney. Marshall and Lily eventually get back on track and conclude the season with a wedding. 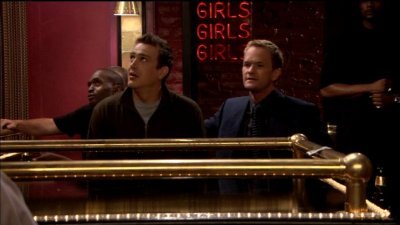 In the early half of the season, Ted and Robin's relationship is roses and daffodils. They are getting along great... in fact too great. They start to get pretty serious, which includes saying I love you to each other, although Robin has some difficulty expressing it. The two decide to move in together, which Barney wholeheartedly disapproves of. "Moving Day" is a really silly story; Barney goes out of his way to stop Ted from moving into Robin's place.

In addition to the second season's relationship story arcs, there are some plain old fun episodes. "Brunch" is a great story. Ted reveals the details leading up to when he learned about his parent's divorce. It is a hilarious sequence of events, with the entire cast shining. "Aldrin Justice" is silly episode where Barney tries to tame a wild beast. He uses sex to persuade Marshall's tough law professor (Jane Seymour) into grading easier. "Single Stamina" is a simply ridiculous. Barney's gay, black brother James (Wayne Brady) comes to visit. The fun part about this episode is Brady's performance, as he does a fine job mimicking Barney's outrageous personality, except he targets men.

The season's remaining episodes offer a fun compilation of silly storylines and a goofy cast. It is hilarious and entertaining material. However, there are a couple episodes that tend to not present the show in all its glory. For example, "Arrivederci, Fiero" is an episode that I thought was too much. In it, Marshall pines over the loss of his car. After nearly reaching 200,000 miles, it dies. Marshall and Ted recount when they first met (which is pretty funny), but the rest of the episode comes off a beyond over-the-top.

In the end, How I Met Your Mother's second season is a solid collection of episodes. Neil Patrick Harris continues to steal the spotlight with his off-the-wall character. As for the rest of the cast, they may not be as hilarious as Harris, but they have a good chemistry together. Fans of the series will love (almost) every minute this season has to offer. As for newcomers, you will definitely want to give this show a try, albeit I recommend taking a look at season one first. 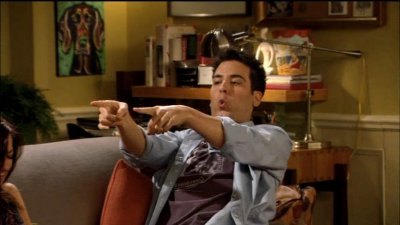 1. Where Are we Now?: Ted and Robin are now in love, but they have little time to enjoy it. They're too busy trying, along with Barney, to help a depressed Marshall get over losing Lily. George Clinton has a cameo.
2. The Scorpion And The Toad: With Ted no longer looking for love, Barney turns his attention to finding someone new for Marshall to help him forget about Lily. Meanwhile, Robin has a surprise guest.
3. Brunch: Ted flies his parents (Michael Gross, Cristine Rose) to New York to celebrate their 30th anniversary and meet Robin, but a brunch outing proves disastrous when Ted learns something startling about his mom and dad.
4. Ted Mosby, Architect: Robin and Ted have their first fight after she tells him his architect work stories are boring. Then, believing Ted may be cheating to get back at her, Robin goes to find him.
5. World's Greatest Couple: When Lily's tiny apartment becomes unbearable, Barney uncharacteristically lets her stay with him, then gets her to pretend she's his wife and chase away one-night stands the morning after.
6. Aldrin Justice: Believing that Marshall's recently divorced professor (Jane Seymour) is giving out poor grades because of unfulfilled sexual needs, Barney sets out to satisfy her; Lily gets a job in Ted's office and tries to teach his insufferable boss (Bryan Cranston) a lesson.
7. Swarley: Marshall starts dating a woman (Morena Baccarin) and they really hit it off, but Barney and Ted tell him he has to dump her because she has "crazy eyes."
8. Atlantic City: Marshall and Lily, together again, decide to elope in Atlantic City, and they gather Barney, Ted and Robin to take part in the wedding.
9. Robin Sparkles: Everyone discovers that Robin has an aversion to malls because of a secret from her past, and Ted tries to get her to reveal what happened. Barney is convinced she made a porn film, while Marshall thinks she's married.
10. Single Stamina: Barney's black, gay brother, James (Wayne Brady), visits and Robin, the only one in the group who's never met him, is surprised. But James has a surprise for Barney that he finds hard to accept.
11. How Lily Stole Christmas: Ted almost ruins Christmas for everyone when, still carrying around anger toward Lily, he calls her a horribly disgusting name.
12. First Time in New York: Robin wants to tell Ted she loves him, but she can't make the leap. Meanwhile, her sister (Lucy Hale) visits and brings her boyfriend (Ryan Pinkston), and Robin doesn't react well when her sister says she's ready to lose her virginity.
13. Columns: When Ted is constantly insulted by his former boss (Bryan Cranston), who is now working for him on a project, he is told to fire the man, but he finds that a hard thing to do. Meanwhile, Barney offers Lily a lot of money to paint a nude portrait of him.
14. Monday Night Football: The gang feel obligated to attend a funeral being held while the Super Bowl is being played, and they vow to avoid hearing anything about the game so they can all watch it the next night. Emmitt Smith has a cameo.
15. Lucky Penny: Ted misses a flight to Chicago for a job interview, and while he and Robin wait for news of an alternate flight, they recall through flashbacks the sequence of events that caused the mishap, in an effort to find the person responsible.
16. Stuff: Robin is uneasy with Ted keeping gifts from past lovers in the apartment, so the two of them ask the gang to vote on whether the objects should stay or go. Meanwhile, Lily expects everyone to attend a play she's in.
17. Arrivederci, Fiero: As Marshall's beloved Fiero prepares to hit 200,000 miles, it stops dead. While the gang wait in the garage for the verdict, they recall, through flashbacks, their Fiero memories, which include the story of how Marshall and Ted became friends.
18. Moving Day: Ted decides to move in with Robin but Barney hijacks the truck filled with Ted's belongings on moving day in an effort to prevent the union. Meanwhile, Lily and Marshall find it hard to adjust to not having Ted with them.
19. Bachelor Party: Barney scraps Marshall's bachelor-party plans and then disregards his wishes by hiring a stripper.
20. Showdown: Barney, who has always wanted to meet Bob Barker, has his wish fulfilled when he appears on "The Price Is Right." Bob Barker and Rich Fields appear as themselves.
21. Something Borrowed: Marshall and Lily's wedding is plagued by problems, but Barney, of all people, saves the day.
22. Something Blue: In the second-season finale, Barney finds out at Lily and Marshall's wedding reception that Ted and Robin have a big secret, and he tries to get it out of them. 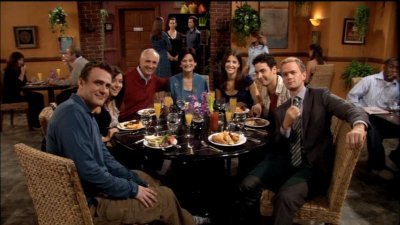 *Note: This review does not (visually) reflect the final product. It is a review of a promotional copy and the picture is highly compressed.

Audio:
The audio is given in English 5.1 Dolby digital surround sound. The track is dialogue driven and audible throughout the presentation. There are also subtitles in English, French, and Spanish. 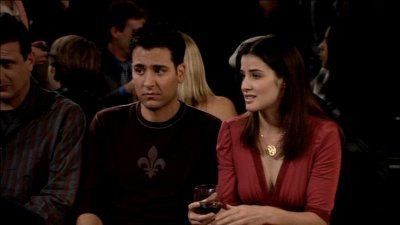 Final Thoughts:
How I Met Your Mother is a fun sitcom about a man telling his kids about how he met their mother and all of the crazy fun that occurred since then. The show has a pretty strong cast, with Neil Patrick Harris in the front. The characters are goofy and interact in over-the-top situations and outrageous dialogue. It is, in short, a fun show. This second season continues with a couple dramatic plotlines and nonstop laughter. It is something you do not want to miss out on.