Ghost and Mr. Chicken, The 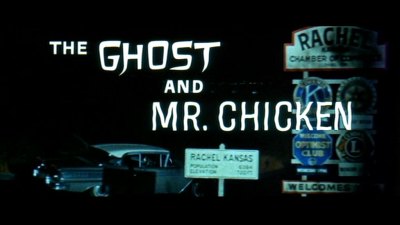 Not seeing one of my favorite Halloween films on the DVDTalk website, I thought I'd watch it again and put up a review. Released on DVD in 2003, 1966's The Ghost and Mr. Chicken, Don Knotts' first smash hit under his Universal film contract, plays just as well over forty years later - maybe even better - especially when you compare it to what passes for "family films" today. Written by James Fritzell and Everett Greenbaum (with an uncredited assist by Andy Griffith), the geniuses behind the early success of The Andy Griffith Show, The Ghost and Mr. Chicken perfectly captures that slightly screwy, small-town, and in this case Midwestern (Rachel, Kansas) sense of humor and gentle emotion that epitomized the best of Knotts' episodes in Mayberry, R. F. D.. With a supporting cast of some of the funniest character actors in Hollywood at the time, The Ghost and Mr. Chicken still gets big laughs from adults and kids, as well as giving the small fry a few wholesome chills.

Luther Heggs (Don Knotts), a typesetter for the Rachel Courier Express dreams of becoming a full-fledged reporter. But after mistakenly crying murder ("Calm? Calm? Do "calm" and "murder" go together? "Murder" and "calm?") over a simple case of spousal battery on the town drunk, Calver Weems (Hal Smith), Luther finds himself again the butt of the town's jokes. Certainly Ollie Weaver (Skip Homeier), a hot-shot, nasty, sniping reporter, takes advantage of the situation, mercilessly teasing Luther about his mistake. It doesn't help, either, that good-natured schnook Luther is hopelessly in love with Alma Parker (Joan Staley), the town beauty and Ollie's frequent date.

But back at work, Mr. Kelsey (Liam Redmond), the paper's janitor, takes Luther a little more seriously, suggesting that Luther substitute an anonymous filler item with a story on the Simmons' mansion (with Kelsey basically writing the story himself while Luther sets the type). You see, it was twenty years ago that the bodies of Mr. and Mrs. Simmons were found at the mansion. Mrs. Simmons had been stabbed in the neck by Mr. Simmons, and, half-mad with the blood still dripping from his hands, went running up to the organ tower, insanely playing the organ before throwing himself out the third story window. The item causes a sensation in Rachel, and again with the subtle help of Mr. Kelsey, the paper's owner, George Beckett (Dick Sargent), suggests that Luther spend the night in the murder house, on the anniversary of the killings. 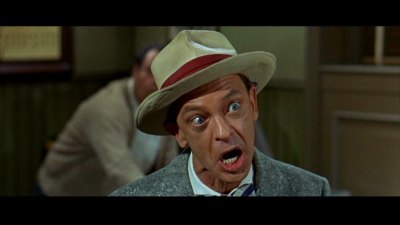 Luther, the original Mr. Chicken, is terrified at the thought, but steels himself to the challenge and agrees. Once there, he goes through a series of comically frightening, but harmless scares, until he hears knocking, then maniacal laughter, and then organ music. Terrified, he exits the house, but not before seeing a pair of gardening shears sticking out of the bleeding portrait of Mrs. Simmons. Too terrified to be coherent, Ollie and George write Luther's story, which causes another sensation in Rachel, with Luther now the town hero. But Nicholas Simmons (Philip Ober) isn't amused. The nephew of Old Man Simmons, Nicholas has returned to town to tear down the mansion, but Hegg's story has attracted the attention of Mrs. Halcyon Maxwell (Reta Shaw), the president of the Psychic Occult Society of Rachel, Kansas - and owner of 51% of the town's Savings and Loan, which holds a lien on the mansion. Simmons has to discredit Luther, before he can tear down the house. Will the Simmons' ghost make itself known to everyone in Rachel, before Luther is sued for libel?

The Ghost and Mr. Chicken is the kind of "perfect" film that, within its narrow range, expertly meshes its various elements to create an seemingly effortless, unified entertainment. And by "perfect," I'm not suggesting it's in a league with Citizen Kane, Lubitsch or Wilder. But whatever it sets out to do, however "lowbrow," it does masterfully (creating a film that in some ways, is more fun and easy to watch than more ambitious -- and problematic -- comedies by the likes of artists like Lubitsch and Wilder). The Andy Griffith Show had struck a chord with television audiences all over the country (but particularly in the South and in the Midwest) with its down-home, yet surrealistically tinged comedy. The Ghost and Mr. Chicken approaches its standard "haunted house comedy" plot in much the same manner that a typical Andy Griffith episode would do: the central situation is merely an excuse for the comedy to come out of the characters' interactions.

And indeed, the main spook sequence with Knotts in the Simmons mansion comes towards the beginning of the film; it's a beautifully modulated sequence, with Knotts quite astounding in the various ways he can summon up fit-shaking terror (little kids still get very quiet during this sequence, with their laughter causing even more tension as the scares increase). But most of The Ghost and Mr. Chicken's humor comes from sequences surrounding this main premise, and from the comedic brilliance of the various supporting actors showing their stuff.

Of course, when utilizing an underdog lead performer like Knotts, you have to make him pathetic, to get the audience to first root for him, and then to almost write him off as a true loser, before he triumphs over his snotty, superior "betters." And everyone gets the better of Luther in Rachel. Even the old ladies - the "girls" at Mrs. Natalie Miller's (Lurene Tuttle) Boarding House (hysterically played by Jesslyn Fax and Nydia Westman) - can't help but laugh at Luther's bumbling. Most sequences are designed to maximize Knott's social and physical awkwardness, including having lunch with Alma (trying to eat chicken soup standing up), the hilarious Chamber of Commerce picnic where Knotts tries to give a speech without his notes (and almost has a heart attack from an attack of nerves), the humiliating court trial, where Luther is basically labeled a lunatic, and the final trip to the Simmons mansion, where he's shown up in front of the whole town, when none of the things he described in his story are present in the mansion. 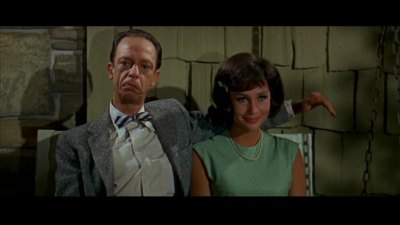 These scenes and others showcase Fritzell's and Greenbaum's absolute mastery of the good-natured but slightly surreal Capraesque humor that was so successfully nurtured on The Andy Griffith Show. For those of us who grew up during the late 60s and early 70s, The Ghost and Mr. Chicken is especially amusing because the social customs and characters spoofed here were still floating around in small town America around that time. You could still find screwy, daffy ladies at church and at town socials exactly like Mrs. Hutchinson and Mrs. Cobb of Mrs. Miller's Boarding House, with their print dresses and elaborate hats from J.C. Penny's, and their endless bickering and gossiping. If someone said "bosom" in public, they probably would have been embarrassed just like Knotts. Town picnics weren't complete without a terribly prepared and delivered speech by some local town notary. And most little towns had a dilapidated old house that kids made up stories about - or got up the nerve to go into on a dark night. The contrived fantasy murder mystery story might be silly in The Ghost and Mr. Chicken, but the basic honesty of the characters continues to strike a chord with viewers who recognize these people and social conditions in their own lives - or at least in their memories (I never see older women in print dresses and hats anymore, and they don't have town socials here anymore; more's the pity).

Knotts is nothing short of inspired in all his spastic glory; the opening scene, where Knotts thinks he sees a murder from his Edsel (what else would he drive?) is expertly built by director Alan Rafkin, with Knotts seemingly vibrating right off the screen as Rafkin increases the frequency of Hope Summer's screams. Never more hilarious than when he's trying to control his unresponding body, or steel himself for action (watch him try and get up the nerve to attack Simmons in the mansion), Knotts' vocal delivery is just as funny as his peripatetic gyrations. Ably assisting Knotts are a hall-of-fame line-up of America's funniest supporting character actors, including Shaw, Harry Hickox as the exasperated Police Chief Art Fuller ("He's so keyed up!"), Charles Lane as Simmons' hatchet-faced defense attorney Mr. Whitlow, Fax, Westman, George Chandler as easygoing Judge Harley Nast ("Where's the Bible?"), Robert Cornthwaite as Springer, Luther's attorney, Sandra Gould as Loretta Pine, who kills with her one line ("I get to feed the speaker!"), Cliff Norton as Charlie the Bailiff, Ellen Corby as Luther's third grade teacher, Miss Neva Tremaine ("He was painfully thin and keyed up."), Jim Boles as town wiseguy Billy Ray Fox, Al Checco as looney Gaylord Patie, Herbie Faye as the guy in the diner who's slow to give up his seat to Luther ("I'm almost up to my Jell-O."), Harry Hines, as the fake Rotarian at the picnic, J. Edward McKinley as Mayor Carl Preston, Bert Mustin as Mr. Dellagondo at the boarding house, Eddie Quillan, as the elevator operator who can't quite get the car level with the floor (giving the film one of its best sight gags, when Luther does a header getting in), Dick Wilson as the Bandleader, and last but certainly not least, the magnificently mournful James Millhollin as Milo Maxwell, the hang-dog, henpecked banker whose day is made when his pneumatic secretary approaches him ("Of all your sweaters, I love this one the most!"). There will never again be performers like these superlative comedic actors; it's a joy to watch them here.

Shot on the Universal backlot in an amazingly short seventeen days (can you imagine the garbage that comes out today, that normally takes years of preproduction and shooting?), The Ghost and Mr. Chicken sports a candy-bright color scheme, made comic-book dark and grainy due to shooting in Technicolor Techniscope. The house next to the famous "Munster Mansion" is initially shown as the Simmons mansion, but later, the Simmons' entrance is obviously 1313 Mockingbird lane, re-dressed for Knotts's film. The sets are pure Universal storage, with props and furnishing reused in countless films from that period, all adding to the cozy familiarity of the piece. And ultimately, that may be the best element of The Ghost and Mr. Chicken: that comforting familiarity, born out of the known, expected comedy elements found in America's most beloved sitcom, The Andy Griffith Show, tweaked by a superior comedic effort by Don Knotts in his first true leading role. Watching The Ghost and Mr. Chicken every Halloween, jazzed up by the truly triumphant score by legend Vic Mizzy (the brilliant, bombastic, creepy "Organ Theme" is, in my opinion, one of the most successful music cues in any film comedy) one finds the movie getting better and better with each passing year. 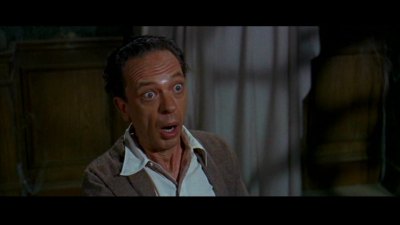 The Video:
The anamorphically enhanced, 2.35:1 widescreen image for The Ghost and Mr. Chicken looks a little grainy (which comes from the Techniscope process), with some print damage, especially during the beginning and ending credit sequences, but overall, it's a beautifully sharp, color-soaked image.

The Audio:
There's a Dolby Digital English 2.0 mono audio mix that's big and fat, and accurately represents the original theatrical presentation. There are also Spanish and French mono tracks, along with English captions, and French and Spanish subtitles.

The Extras:
The only extra is an original trailer for The Ghost and Mr. Chicken.