BBC Worldwide // Unrated // September 25, 2007
List Price: $14.98 [Buy now and save at Amazon]
Review by Stuart Galbraith IV | posted October 30, 2007 | E-mail the Author
After unwisely being updated to swinging, mod London (in Dracula A.D. 1972), flirting with a James Bondian plot to destroy the world (in The Satanic Rites of Dracula), and making a pact with kung fu-fightin' vampires in Asia (in The Legend of the 7 Golden Vampires) in the last three Hammer Draculas, to say nothing of plunging to the depths of slumming for auteur-du-trash Jess Franco, by 1978 Count Dracula was primed for a return to his classical roots. Werner Herzog's Nosferatu: Phantom der Nacht and Universal's big budget Dracula would be released before the decade was out, but both were preceded by a well-regarded television adaptation of Bram Stoker's novel, Count Dracula, produced by the BBC in 1977. Though it falls short of perfection, it's still one of the three or four best adaptations of the story and arguably the most faithful to its source. 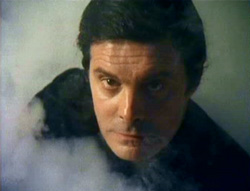 The familiar story: a young British solicitor, Jonathan Harker (Bosco Hogan), journeys to the remote castle of Count Dracula (Louis Jourdan) deep in the remote Carpathian mountains near the border between Transylvania and Moldavia. There to provide legal assistance in the purchase of some property in Britain, Harker gradually realizes that his gentlemanly host is, in fact, a vampire. Harker becomes Dracula's prisoner and he desperately tries to escape.

Later, as Harker's fiancee, Mina (Judi Bowker, known to genre fans for Clash of the Titans), frets about Jonathan's disappearance during a family vacation in Whitby, a Russian ship runs aground and soon thereafter Mina's sister, Lucy (Susan Penhaligon, of The Land That Time Forgot), falls under some mysterious spell/malady. Dr. John Seward (Mark Burns), a psychiatrist, and Texan Quincey Holmwood (Richard Barnes), both of whom are in love with Lucy, send for Seward's old professor, Dr. van Helsing (Frank Finlay), who eventually realizes that she too has fallen under Dracula's spell.

As was the standard for such British shows at the time, Count Dracula was shot in a mix of 16mm film and videotape, usually exteriors for the former and interiors for the latter. This mix of relatively incompatible technologies tends to be quite jarring for American viewers spoiled by Hollywood shows shot in 35mm, though the impact here is greatly minimized thanks to its unusually careful, atmospheric lighting, including some excellent night-for-night photography. At 160 minutes (divided into two parts), Count Dracula's leisurely pace allows writer Gerald Savory (whose credits go back to Hitchcock's Young and Innocent) to cover a lot of ground usually jettisoned in other film and stage adaptations, though even this version makes a few changes to Stoker's story, notably making Mina and Lucy sisters (they were unrelated best friends in the novel) and combining Lucy's two suitors (Arthur Holmwood and Quincey Morris) into a single character. The longer running time allows characters like Jonathan and Mina to be fleshed out considerably, and Harker's journey to Castle Dracula and his gradual realization that he's become Dracula's prisoner is far more atmospheric and suspenseful; most film versions tend to rush through these scenes to get Dracula to England as quickly as possible.

In what must have been a bitter pill for Hammer's filmmakers to swallow, the prestigious, critically-acclaimed BBC version is just as graphic and gruesome as their earlier features had been (at times even more so), movies that had been almost universally condemned by homegrown film critics as tastelessly violent and exploitative. For instance, the BBC version includes a bit from the novel possibly never filmed prior to this, mainly due to its extreme gruesomeness: Count Dracula rewards his vampire brides with a potato sack containing a newborn baby for them to feast on. Had Hammer dramatized this even ten years earlier the company would have been run out on a rail. Indeed, peppered throughout are moments perhaps inspired by the Hammer Dracula movies, though for the most part there's an obvious, sincere effort to break away from what had been done before, to steer clear of genre cliches with little touches that bring a freshness to the overly familiar material.

Finishing Count Dracula on tape did have one advantage: the use of video-generated effects for some of the nightmarish sequences, some of which seem to have required the actors to wear silver-colored makeup to make them work. What might have been extravagantly overdone is instead handled with great restraint and imagination by director Philip Saville (The Life and Loves of a She-Devil, The Cloning of Joanna May). There are similarly neat touches throughout: Dracula's fangs are so subtle that they're not immediately perceptible, as is the X-shaped clump of coarse hair on Dracula's palms. Other special effects, notably the doomed ship in the stormy seas off the British coast, are extremely good for a television production.

Actor Louis Jourdan, before this best known as the suave Gaston Lachaille in MGM's Gigi (1958), is an inspired choice as Dracula. By 1977 the 58-year-old actor's screen presence had evolved into an erudite and regal but somehow sinister one (maybe it's that cat-that-swallowed-the-canary smile), a screen persona that led to a second career as sophisticated, intellectual villains in movies like Octopussy and Swamp Thing. He's especially good during the cat-and-mouse scenes with Jonathan Harker in the first half, and one of the show's most disturbing moments is among its most understated: when Harker discovers Dracula's coffin, in desperation he viciously begins beating the Count with a nearby spade. Dracula, inert but conscious, merely turns his head, his shark-like, all-red eyes wide open, and placidly smiles at the helpless mortal.

Frank Finlay, a better and more diverse actor than Jourdan, plays Dutch humanist van Helsing as he appears in the book, and is an obvious influence on Anthony Hopkins' later portrayal. It's a fine performance, yet Peter Cushing's definitive (if very British) interpretation of the character is pretty hard to shake. The rest of the cast is excellent with one exception: Richard Barnes affects a totally unbelievable Texas drawl that comes off as ludicrous to American ears. (Americans got their revenge when Francis Coppola wildly miscast Keanu Reeves as Harker in his 1990 film.)

Count Dracula is presented in its original full frame format in a decent transfer that makes the best of the technical limitations. The disc is annoyingly preceded by almost three minutes of ads for other BBC titles that cannot be skipped or even fast-forwarded through. The Dolby Digital mono (English only) is fine, and the disc is closed-captioned. There are, sadly, no Extra Features.

Despite a couple of missteps, Count Dracula remains one of the best-ever adaptations of Bram Stoker's novel and the DVD makes perfect Halloween viewing. Highly Recommended.