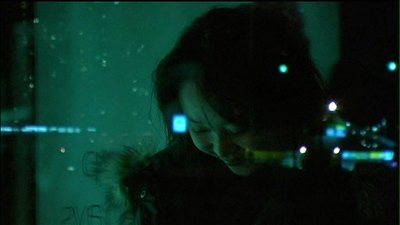 In Between Days sets itself up with a difficult premise. How do you capture a time of life where your main character is neither here nor there, no longer an innocent but also not yet fully initiated into adulthood? You can go for a standard plot, following well-worn narrative lines, and it may work, you can use the established tropes to get your point across. It's more difficult, however, to break from convention and create something that gingerly touches on the desired emotions and becomes more about the mood itself than any easily outlined story narrative.

The debut feature-length film of experimental artist So Yong Kim, In Between Days does exactly that. It recreates the life of a young immigrant as she transitions from her old life in South Korea to a new life in North America, changing culturally as she also changes inside herself. Newcomer Jiseon Kim plays Aimie, the adolescent girl in question. She and her mother have moved across the ocean and are struggling to get by. Aimee's father is absent, possibly still in Korea, possibly having left for parts unknown. Aimee communicates with him throughout the film, in voiceover that could be a letter to him or could just be a monologue masquerading as a dialogue in her head. She longs to see him again, longs for some kind of reminder of when her life had a certain kind of stability.

Aimee is attending school to learn English and become further assimilated into her new environment, but she soon quits her lessons to get her tuition back and buy her companion Tran (Taegu Andy Kang) an expensive bracelet. She and Tran are friends, largely platonic, but with an affection between them that neither feels comfortable sharing. He broaches the subject in a joking manner, usually as an appeal for sex. They speak Korean most of the time, though both of them are fairly adept at English. Their lives are pretty much isolated in the Korean sector of their city, and they pass the time aimlessly, playing videogames, drinking coffee, smoking, and occasionally boosting car stereos for a little cash. They don't talk about much, their friendship is built on how easy it is to be together.

The two flirt with other people, but whether they are really interested in those people or they are just trying to make the other one jealous is not really clear. Nothing is really clear, because they don't know how to express themselves. Most of our understanding of Aimie comes from the things she says to her absent father. She's rude to her mother, and kind of a brat, really. Yet, Jiseon Kim's big, soulful eyes and soft face are so tender, our hearts break seeing the pain behind the petulance. Eventually she will have to face the facts about her father and her feelings for Tran, but she's going to put it off as long as she can.

So Yong Kim co-wrote, edited, and directed In Between Days. The movie was shot on digital video by cinematographer Sarah Levy, who also shot James Bolton's excellent indie drama The Graffiti Artist. This came as little surprise to me when I looked up Levy's name, as I was reminded of The Graffiti Artist while watching In Between Days. Both films have an unforced intimacy that is a combination of the minimalist acting, a director confident in having long periods of silence, and Levy's choice to move the camera in tight on the actors, nestling them in the image frame. Both films also play out on an urban landscape where the sounds of the surrounding city provide an ambient score and the absence of other people in most scenes suggests an environment that is both desolate and private.

In Between Days also made me think of the cinema of Hou Hsiao-Hsien, particularly Millennium Mambo. In that film, Hsiao-Hsien also chronicles the changing emotions of a young girl, though Shu Qi is slightly older and a touch more glamorous in the role than Jiseon Kim is in In Between Days. So Yong Kim's film is the more everyday side of that story, wracked with more pain, and possibly more life altering for how small the catalysts for change really are. The bumps Aimie experiences along the way are tiny in comparison to the drastic decision she makes at the end of the picture, and the tears in her eyes during that final shot are not for what she lost, but how ill-prepared she was for the next stage.

So Yong Kim has made an impressive debut feature. I hope more people get to see In Between Days now that it is leaving the festival circuit and limited runs in small theatres and coming to DVD. Maybe a little attention will encourage her to get behind the camera again. 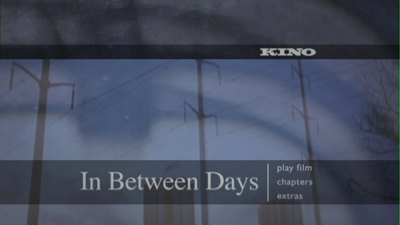 Video:
In Between Days has a really nice 1.85:1 transfer that captures all the nuance of digital video. Sure, there are some scenes where the DV is fuzzy, but there are others, such as the back-half where the kids spend a lot of time in the snow, that are fantastic for how Sarah Levy has captured such a breadth of detail with her camera. You can practically feel the chill! Most stunning, though, are the early night scenes, after Aimee has done her hair and make-up, and she and Tran are going to a party. Levy and Kim choose to shoot the kids through the glass of a bus shelter, letting the reflection of the city stay superimposed over their faces. It looks fabulous.

Sound:
Most of the dialogue in In Between Days is in Korean, with the occasional English interjection. The subtitles are burned into the picture, but they are easy to read and move at a manageable speed. The soundtrack doesn't receive a fancy mix, but is still quite good. There is no score, and the natural audio of the environment is often used. Excellent sound effects, such as boots crunching on snow or the passing traffic, come through strong and loud.

Extras:
Two bonus features: a stills gallery and a fourteen-minute conversation with So Yong Kim and her writing partner/producer Bradley Rust Grey. They discuss the genesis of the project and its journey from page to screen.

FINAL THOUGHTS:
Once or twice a year, a movie as surprising and fulfilling as In Between Days sneaks up on me and really gets under my skin. So Yong Kim's feature-length debut is just such a film. The quiet story of a Korean immigrant struggling to understand her new life in North America, it placidly examines her emotions, the absence of her father, the boy whom she can't talk to about her feelings, and the general disconnectedness she feels at being uprooted. Working with cinematographer Sarah Levy, Kim creates a work of digital Neorealism, something both minimal and utterly natural. In Between Days is a keeper. Highly Recommended. 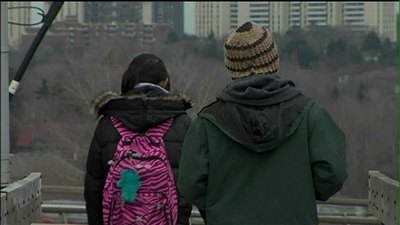