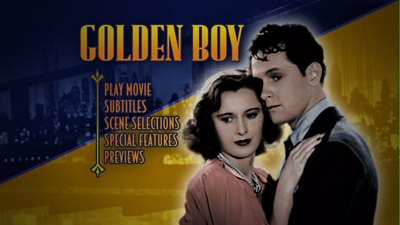 All through watching Golden Boy, the 1939 boxing picture based on a play by Clifford Odets (The Sweet Smell of Success), I kept thinking of Barton Fink. In the Coen Bros. movie, Barton is a successful New York playwright lured to Hollywood to write a boxing picture for Wallace Beery. It's a degrading assignment for an artiste of the people. The movie business has its own way of taking talent that stands on its own and teaching it how to write by formula, putting the square peg in the round hole.

I don't know exactly why I put the two movies togther. Odets didn't write the screenplay for Golden Boy, nor did director Rouben Mamoulian (The Mark of Zorro) or Columbia Pictures force the sports story line into a play that didn't have it already. I think it's just the weird way my brain works, and it really has nothing to do with anything. Besides, I might be wrong, it might have been a wrasslin' picture Mr. Beery was set to star in.

Watching the arc of Joe Bonaparte, the part that provided William Holden with his first major film role, it did occur to me, however, that Golden Boy has all the markings of a classic boxing picture. If it's not the original that those that have followed copied, it's at least closer to ground zero than the rest of them. If there's any bone to pick with the film, it's that its individual parts are overly familiar, making Golden Boy feel a little dated. Even so, the slick way those parts fit together reminds us why Hollywood classics are so darned good even all these years later.

Holden's Bonaparte is a good New York boy, born to an Italian immigrant father (Lee J. Cobb, On the Waterfront) and looking to make something of the life daddy gave him. On the eve of his 21st birthday, he talks his way into the office of prizefight promoter Tom Moody (Adolphe Menjou, Roxie Hart) and informs the man that the fighter Moody's been managing has broken his hand and can't fight in that night's exhibition. A quick trip to the gym not only reveals that it's true, but that Bonaparte is the one that was sparring with him fiercely enough to cause those bones to shatter. The young man insists he can take the place of the injured pugilist, and under the urging of his fiancé and assistant, Lorna (Barbara Stanwyck, Double Indemnity), Moody reluctantly agrees.

Naturally, Bonaparte wins the bout, and it starts him on a meteoric career through the boxing ranks. Success is going to come with a price, however. The kid wasn't born to be a fighter, but to play the violin. To go against that is to go against his nature and to break his father's heart. What an American dream! Drop your impractical passion and get a job using your hands. Get everything you want, but destroy yourself in the process! Come to think of it, maybe Barton Fink's slide into the morass isn't so different than Joe Bonaparte's after all....

Odets' story, which went fifteen rounds with four screenwriters before the final script was completed, tracks the disintegration of Joe Bonaparte's character. The Golden Boy becomes tarnished. As the love interest, proclaiming herself as "just a girl from Newark," Stanwyck is first temptress and then conscience. It's her quintessential turn: street-wise girl has to face the softer realities of love and honor. She's wonderful, as always. No one could be as tough or as tender.

The whole cast is exceptional, really. In addition to Cobb and Menjou, there are also plenty of solid character actors backing Holden and Stanwyck in the ring. Sam Levene (The Killers) is Joe's enterprising and happy-go-lucky brother-in-law, while Joseph Calleia (Gilda) is the menacing gangster who ushers Joe across the final threshold. It's also quite a treat seeing William Holden at such a young age. He plays Joe Bonaparte as a firecracker, learning the harsh lessons that would inform the cynicism of many of Holden's later roles but without the wry smirk that would make the actor such a charming devil. He looks convincing in the ring and playing the violin both, though there is surprisingly more of the latter than the former. We only see a quick montage of Joe's first fight, forcing us to wait until the climactic match to get our fair share of body blows. That last bout is scrappy and fierce. Holden throws lots of quick jabs, hard charging toward the prize.

If Golden Boy seems overly predictable now, it's just a product of age. Some of it is schmaltzy, sure, and we can guess a lot of the punches the script is going to throw at us, but Odets doesn't spare the melodrama and Mamoulian gives the movie a lot of great atmosphere, using smoke, shadows, and ambitious shot compositions to give Golden Boy a unique look. Plus, the ensemble of actors leaps into the story with such conviction, the plot turns are almost secondary.

Golden Boy is a tremendously solid movie. Not necessarily a total knock-out, but definitely a technical one. 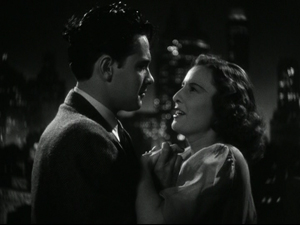 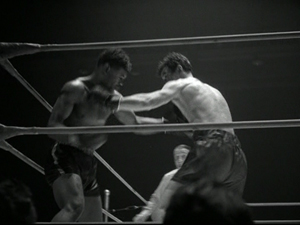 Video:
Golden Boy is a 1.33:1 full-screen motion picture, shot in glorious black-and-white. The DVD transfer is excellent, almost completely clean. A handful of times there are scenes where there is some flicker for a few frames, but not enough to be overly distracting and never sticking around for long. The image looks fresh and new, a truly swell restoration job.

Sound:
There is a Dolby mix of the English soundtrack, as well as optional English subtitles and Closed Captioning. The audio is good and clear, with nice tones and no background noise.

Extras:
For Golden Boy's first-ever release on DVD, the studio pulls out all the stops to deliver a handful of fancy bonus features. They are as follows:

* The cartoon short subject "The Kangaroo Kid," (7 minutes, 25 seconds) which parodies Golden Boy. This is a rare Columbia animated cartoon, which wasn't as prevalent in syndication as the shorts of the more famous studios.
* "Please to Mitt You" live-action short (18:00), the main distinction of which is it features Shemp Howard as a member of the cast.
* "1930 Screen Snapshots" (8:30), a movie newsreel showing stars in their vacation time, including Barbara Stanwyck.
* "Sudden Silence" episode of Ford Theatre (25:00), the first television drama Barbara Stanwyck ever made. She plays the wife of an Old West lawman who has to stand by her man--and even stand in for him.
* Golden Boy theatrical trailer.

FINAL THOUGHTS:
Golden Boy is the prototypical boxing picture. William Holden plays a scrappy young man who wants to prove himself to the world, leaving behind a loving father and his natural aptitude with a violin to do it. Barbara Stanwyck is his love interest, the city girl who first lures him in and then tries to warn him away from the pitfalls on his chosen path. Though cynicism doesn't win out, it certainly has a good showing, as Holden's character runs headlong into the dark side. It's familiar territory, but excellently acted and certainly well told. Here on DVD for the first time, Golden Boy also comes with some swell extras. Recommended. 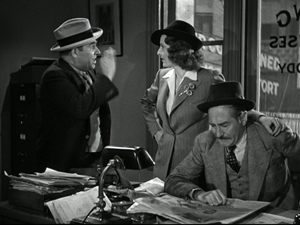 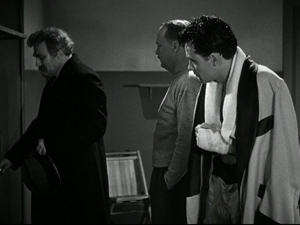