One of the most popular manga series, both in the US and Japan, is Bleach.  The on-going comic has sold over 40 million copies (of the reprint volumes) in Japan alone.  Here in the US, Viz has released over 20 volumes of the translated manga.  The animated series has been making its way to DVD also, with individual volumes selling well.   (For a more detailed look at the series, check out Don Houston's reviews of the individual releases here.)  Now Viz has collected the first five discs in one nice package.  Fans of supernatural anime are sure to gobble this up.

Ichigo Kurosaki is not your average kid.  Sure, he goes to high school like other kids his age, and he helps his father out at the medical clinic that his family runs, but Ichigo can do something most people can't:  He can see ghosts.  It isn't scary or freaky; it's just something that he's learned to live with.


One day he spots a girl, Rukia Kuchiki, that he assumes is a ghost, but she isn't.  She's a 'Soul Reaper', someone who helps dead people pass on to the other side.  In addition to that, Soul Reapers fight Hollows, spirits that weren't been able to pass on and have subsequently turned into monsters who feed on people's souls.

While talking to Ichigo, Rukia is attacked by a Hollow and wounded badly.   Knowing that Ichigo won't stand a chance against the evil monster, she transfers some of her power to the young man.  At least that's what she tries to do.  For some reason he absorbs all of her power.  With his new-found abilities he's able to easily defeat the Hollow, but afterwards he's not able to give Rukia her powers back. 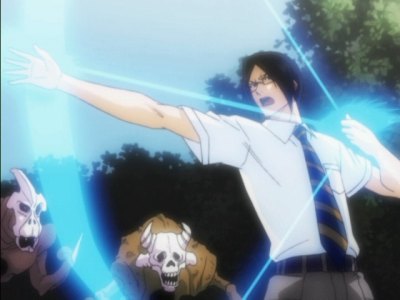 The next day at school, Ichigo is astounded to discover that the new transfer student is none other than Rukia.  Without her Soul Reaper powers, she can't travel back to the Soul Society and is force to put her essence in a gigai, an artificial body.  Living in the closet in Ichigo's bedroom, Rukia forces Ichigo to take over her job, fighting Hollows and defending humanity.  The lad is a little hesitant at first, but Rukia can be quite persistant.

This first set of 20 episodes covers the first story arc which pretty much sets up the show for what's to come.  We're introduced to the supporting characters, many of who will play important parts in the series.  Orihime Inoue is a female classmate of Ichigo's who is an orphan.  She was living with her brother until he died not too long ago.  Unfortunately he wasn't able to pass over and comes back as a Hollow, which changes Orihime's life once again.  Another friend of Ichigo's is Chad, a tall muscular student who looks intimidating but is meek and mild in temperament.  Ichigo also goes to school with Ury? Ishida, a quiet studious person who is hiding a big secret.  There's also Kon, a modified soul who inhabits Ichigo's body when he's in Soul Reaper form, and when he isn't lives in a stuffed Teddy Bear.

In this first story arc Ichigo fights a lot of Hollows, and viewers learn about his past, and are introduced to the supporting characters.  The series starts off a little... well not slow, but unexciting.  The early shows play out like a monster-of-the-week program, with Ichigo helping out one of his classmates and learning about their past.  Just when I was about to write it off as an entertaining yet average show, things started coming together.  The stories started building on what had happened earlier and they fleshed out the characters in a nice way.  The pace quickens during the last 1/3 of these episodes and there are some unexpected twists and turns that makes the show very engaging.  Things come to a head at the end of this set, but they aren't resolved... we'll have to wait for the next installment for that.

These first five volumes of the series, containing 20 episodes, come in a nice 'book' style case with a page for each DVD.  The book itself is housed in an attractive slipcase.  Inside the front cover is a pocket that contains a nice mini-poster.  One side has an image of Ichigo while the other is covered with conceptual art. 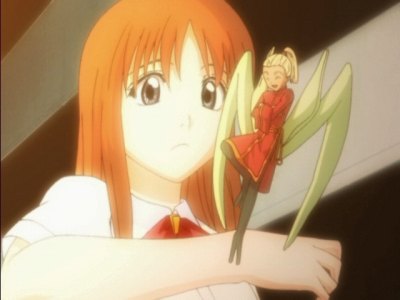 The set comes with the original Japanese audio track as well as an English dub, both in stereo.  I alternated between the two every episode for the first couple of discs, and finally settled on the Japanese track which was just a tad more natural sounding.  The English actors did a good job, and managed to breathe live into the animated characters.  While the show would have been enhanced by a multi-track audio option (especially during the fight with the Menos Grande), the stereo audio was fine.  There was a little use made of the soundstage, though not as much as I was expecting.

There are optional English subtitles, though they don't translate signs or written text, which was a bit irritating at times.

This show is presented with a full frame image, which looks pretty good.  The colors are nice and strong and the blacks are solid.  There was a little banding in some scenes, but aliasing was largely absent, as were other video defects.

Each of these five discs comes with a series of production sketches and a clean opening or closing.  The final DVD also has a featurette, Behind the Scenes of Bleach.  This 19½-minute show has interviews with the English voice cast, who talk about their characters and the recording process.  It was a nice look at the dubbing process.

This is a really fun show.  Though it started off like an average anime series, in the later part of this set the program started bringing together some dangling story lines in a satisfactory manner.  The show picks up speed as one of the main characters becomes endangered and the some unexpected things happen that makes the show much more interesting that I thought it would be at first.  A solid show that deserves a lot of its hype.  Highly Recommended.