As has been the trend for the last few years, after an anime series has been released in single volumes the entire run is collected and solicited at a discount price.  Bandai has now gotten around to collecting Mars Daybreak in a nice compact collector's set.  The show is based on a video game, which bodes ill, but it isn't as bad as it could have been.  While this story of a young man who finds a mecha unit (sound familiar?) never raises above the average mark, it is still entertaining and enjoyable. 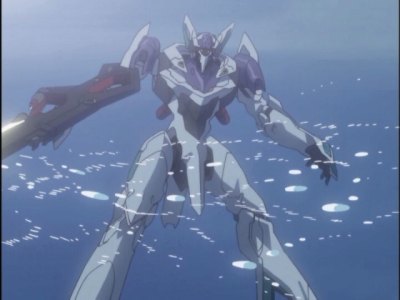 In the future, Mars looks quite different than it does today.  After extensive terraforming the planet is now a giant ocean, with people living on huge floating cities.  The planet is at peace now, having recently lost a war with mother Earth.  The economy is sour though, with rampant unemployment and abundant poverty.

Scraping by, trying to keep body and soul together is a young man named Gram.  He takes jobs wherever he can get them, but steady employment is hard to find and most jobs only last a day or two.

One way that people are able to make some cash is by piracy.  The most feared pirate ship on the seas is the Aurora, and Gram has the bad luck to be in a storage depo when the ships rams.   The city releases its mecha, called Round Bucklers to fend off the attack, but it's pretty much useless.  The Aurora is staffed with trained Buckler pilots and they make quick work of the remote controlled vehicles that the city launches. 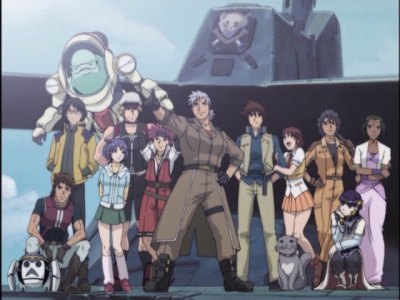 During the battle Gram falls into the seas to a certain death.  He doesn't die however he's saved by an odd and very powerful Round Buckler.  It seems to come out of nowhere and automatically brings the young man aboard.   The city forces don't recognize the craft, and assume he's with the pirates.  Climbing on board the Aurora after the battle, Gram's offered a place on the crew if he's willing to fight for them.  A steady job sounds good, even if it isn't exactly legal, and Gram is reluctantly joins.  He's never liked the idea of pirates, but these guys seem alright.

Newly arrived on Mars is a rookie contingent of Earth forces sent there to complete their training.  One of their member is Lt. Vestamona, an attractive lady who used to live on Mars.  When she sees Gram's picture on a wanted poster, and later runs into him in person, she makes it her personal mission to bring him in.  They have some history, and though she still feels for him, she's not about to shirk her duty.

The beginning of the show plays out like a typical mecha anime, with the good guys being good (the pirates sell their booty to black-marketters who promise to sell the goods to people at a cut rate, and go out of their way to avoid harming any civilians) and the bad guys being bad.  About halfway through the series however, it changes into a quest show.  Gram is wearing a necklace, one that he's worn since birth that has some significance to another pirate, Captain Kubernes.  Apparently it will lead him to the Stone of the Gods, an item of incalculable wealth, if it's matched with the Box of Guidance.  Oh yeah, and Gram might, just might, be the chosen one. 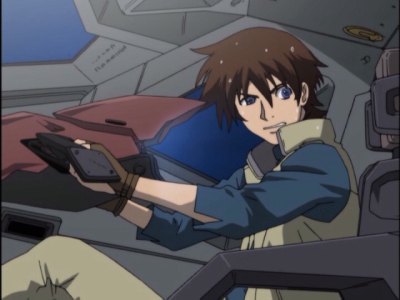 This series started out with some promise, but never rises above average.  The beginning, with Gram stumbling across a powerful mecha, was very clichéd and overdone, but the underwater setting and the pirate angle were nice twists on the typical story.  There are some interesting characters, including a talking cat and a dolphin pirate who spends him time on the ship in an adapted mecha suit.  The show also isn't short on ideas such as the underwater fireworks, special torpedoes loaded with liquid nitrogen that explode and create intricate symmetrical patterns in ice.

The problem is that there just isn't any energy.  The show starts off with some interesting mysteries (where did Gram's mecha come from?) but as the series goes on it fails to build on its successes.  The story seems to throw in every plot device the writers could think of, and because of that there are a lot of inconsistencies and holes in the story.  Not enough to ruin the show, but it does make the show feel a little more haphazard.

Unfortunately, this program never revealed a deep inner core like I was hoping it would.  In the end, it was all fluff with little substance.  That's not necessarily a bad thing, as I don't regret the time I spent screening it.  Mars Daybreak is enjoyable enough to watch, but not the type of show that cries out for repeat viewings.

This release presented the entire 26 episode series on six DVDs.  These discs come in a double width keepcase which has two pages inside, one disc on each side of the page and one each on the front and back of the case.

This set offers viewers the choice of either the original Japanese audio or an English dub both in Dolby Digital stereo.  I started off alternating language tracks with every episode, as I often do, and settled on the Japanese track after the first disc.  While the English actors did a good job, some of the secondary characters didn't sound as natural as their Japanese counterparts.

The series made fair use of the front soundstage during the battles, though after the action was over it pretty much reverted to a mono soundtrack.  The range was adequate though not impressive, and the discs were free from common audio defects.

The show was presented in full frame, as it was originally broadcast in Japan, and the looked pretty good.  Since a good amount of the action takes place underwater, the colors aren't bright and vivid but a bit muted to create a submarine feel.  This works fairly well and isn't a cause for complaint.  On the digital side things look equally fine, with only the most minor aliasing in the background.

This was a pretty bare bones release.  The only bonus items were a clean opening and closing.

While this show started out with some interesting ideas and a story filled with possibilities, it wasn't able to develop its strong points and consequently is only average.  Still worth watching the show definitely has its moments and is enjoyable.  This one gets a light recommendation.

For a more thourough review of the series, check out Don Houston's reviews of the single volumes here.