She was given away to a prostitute in a famous Parisian brothel. Her mother ran away and so did her father. She fell ill but St. Therese cured her. Then she began singing and the world began listening. She became Edith Piaf (the Sparrow).

French director Olivier Dahan offers a complex but exceptionally convincing read on the iconic singer's life story in his latest film La Mome (US title La Vie en Rose). With a breathtaking performance by rising star Marion Cotillard pic goes the extra mile in revealing the chaotic life Piaf led - from her early days in the Parisian slums, to her unexpected discovery by club impresario Louis Leplée (Gerard Depardieu), to her steamy affair with boxing sensation Marcel Cerdan (Jean-Pierre Martins), to her struggle with liver cancer and eventual death at Plascassier, the French Riviera.

Even though pic follows a loose chronological progression plenty of key events overlap each other. Often times the script takes the audience in the past to witness a fragment of Piaf's life which is crucial for the present. Her drug addiction is the obvious example here as time and time again during moments of tremendous pressure Piaf is seen under its influence.

The sense of chaos is a key factor in La Mome (though Dahan and Sobelman's script is far from being a chaotic collage of memory bits). Intentionally misplaced through the entire film controversial events from Piaf's life are countered with fabulous musical performances almost as if to lullaby the audience with her songs while they take a breather from the singer's abusive eccentricities. The approach works well as it naturally highlights the highs and lows in Piaf's career.

Yet, even the greatest of performances La Mome revives do little to dissuade the nagging sense of tragedy here. The brighter Piaf's star shines the stronger the inevitable end feels. It is difficult to explain why but the dramatic snowball effect eventually takes over even the most intimate of scenes. When the love affair between Piaf and Cerdan comes to a halt so does the film, at least temporarily. As a result the epilogue in La Mome is that much more powerful almost as if to remind the audience that Piaf's end came much earlier, before her collapse from cancer.

The extreme life Piaf led however only further enchanted those who fell in love with her voice. She came from the slums of Paris and people always remembered that. So did she. Eventually, the slums with the vices they nurture claimed her back. It was logical, it was predictable, it was inevitable. 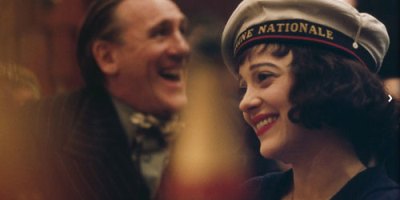 La Mome is a film that benefits from the impeccable performance of an actress with an impressive talent. Cotillard's impersonation of Piaf is so convincing that often times I could not tell a difference. It was only because I knew it was a film that I was able to reassure myself that Cotillard wasn't singing. What an astonishing achievement!

PictureHouse/HBO/Warner have supplied a top-notch transfer for this film. Presented in its original aspect ratio of 2.35:1 and enhanced for widescreen TVs the print is practically flawless. Excellent degree of detail, very convincing contrast, and lush and rich colors is what we have here. The progressive print is also spotless as I could not detect even the tiniest of dots, debris, or scratches. Edge-enhancement is also a non-factor here allowing the viewer to fully appreciate Dahan's vision.

A French 5.1 mix has been supplied for this release with optional English, French, and Spanish subtitles (excellent, small font). Dialog and music are very well mixed and the rich soundtrack has been handled flawlessly. The rear channels often come active and more importantly the quality of the 5.1 mix is of exceptionally high quality. Finally, I could not detect any disturbing audio dropouts/hissings.

The only extra on this disc is a rather large featurette titled "Stepping Into Character" where Marion Cotillard's transformation as Piaf is addressed very successfully. There is plenty of additional info pertaining to the technical issues the director and crew faced while recreating the life of the famous singer.

Hands down one of the best films I saw this year with a performance by Marion Cotillard to die for. Nothing could prepare you for the astonishing job the French actress has done - in La Mome Piaf is alive. The technical treatment the film has received in R1 land is just as satisfying even though this disc lacks a substantial amount of the extras found on the massive French disc. Nevertheless, if you do not see this film you are likely to miss on one of the best, if not the best, foreign features to be released in North America this year.