What if you could kill someone simply by picturing their face and writing down their name?  Would you ever do it?  Could you use that power to create a perfect world, a place without crime or violence?  That's what high school student Light Yagami attempts to do when he comes across a notebook that gives him the power to kill undetected in the latest anime series to be released by Viz, Death Note.  Based on the manga by writer Tsugumi Ohba and illustrator Takeshi Obata (who also draws Hikaru no Go), the anime is faithful to the comic (so far) and has a story that is instantly engaging and is much more layered than one would imagine. 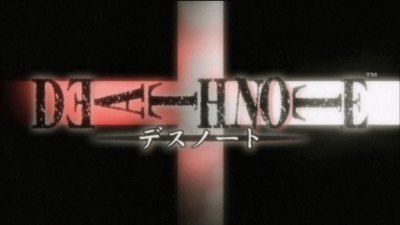 Light Yagami is a brilliant high school student.  He's at the top of his class, and on the practice college entrance exams he routinely places first in the nation.  One afternoon while staring out the window, he sees a notebook fall from the sky.  After class he picks it up and finds some odd instructions on the inside front cover: 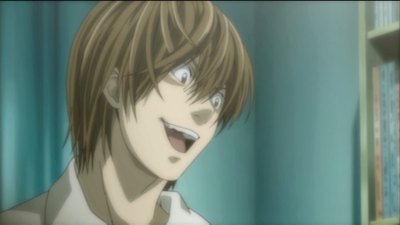 Light thinks it's a joke, but when the news announces that a wanted killer is holding people at an elementary school hostage, he can't help but try it out.  He writes the killer's name down, and a minute later the teachers and students starts running out of the school, the man who was holding them hostage inexplicably died.

A few days after getting the Death Note, Light is in his room when a shinigami, (a Japanese demon,) named Ryuk appears.  Ryuk was the previous owner of the Death Note and dropped it in the human world because he was bored.  He wanted to see what would happen and is quite surprised by the results:  Light has filled up pages and pages with names.  The young man has decided that he'll craft the perfect world, one without crime.  To do that all he needs to do is let people come to the realization that all criminals will end up dying.  After all, who would rob a gas station if they knew they'd end up dead in a day or two. 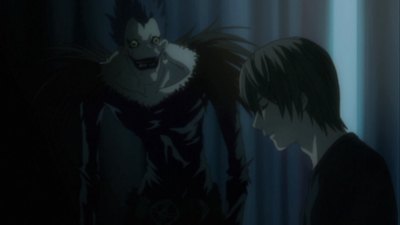 With criminals in prison all over the world dropping dead of heart attacks everyday, it's not long before the governing bodies start to take notice.  Obviously outside of their league, they agree to let the mysterious figure "L" take over the investigation.  L communicates only through a laptop computer, and no one knows his real name or what he looks like.  With a razor sharp intellect, L soon starts to track Light down.  Its one genius pitted against the other.  Which ever one discovers the other identity first wins, and the stakes are incredibly high.

Cat and mouse game where both players are equally intelligent, this anime is very engaging.  It seems impossible for the police to capture anyone using the Death Note, much less someone of Light's intelligence, yet L, using logic and well thought out plans, manages to get very close in an incredibly short amount of time.  Light, of course, has a lot of power at his disposal, but it is limited.  How does he get rid of a guy tailing him?  He needs to discover his name, but he can't just walk up and introduce himself and expect to get the guy's real identity.  Light comes up with wonderfully intricate schemes to get around the obstacles that L puts in his way, and that is what makes this anime so much fun to watch.

The animation is also high caliber.   There aren't a lot of flashy effects or space battles, but the quick cut montages used when Light is writing names in the book are quiet effective both from a visual and narrative point of view.  They don't cut a lot of corners either.  Nothing gets tiring as quickly as an anime show where pans and zooms on static images takes the place of real animation and thankfully that doesn't happen in this show.

This disc comes with both the original Japanese audio track as well as an English dub, both in stereo.  I alternated language tracks with every episodes and found them both equally good.  The English voice actors do a good job and don't ham it up as sometimes happens.  Given the nature of the show, mainly dialog based without any big action sequences, the mix is adequate.  There's some use made of the front sound stage, but not a lot.  The voices are mostly anchored on the screen, but that's not really a problem.  A solid sounding show.

The 1.78:1 anamorphically enhanced image looks very good.  A lot of the story takes place in Light's dark room, and the image is intentionally a little soft, but this only serves to enhance the mood of the story.  The colors in the daylight scenes are bright and solid, and the wide range of grey tones are well defined.  There isn't much in the way of aliasing or banding, making this a very nice looking show.

Viz has a nice assortment of bonus material for this disc.  First off is a 12-minute behind the scenes featurette where some of the English voice actors talk about their roles and the show in general.  This is pretty much fluff, but nice to watch none the less.  Then there's also a commentary on the first episode with the English ADR director, Karl Willems.  It's no secret that I don't enjoy commentaries on anime by the English cast and crew (who are not involved in the decisions that give the show it's look and feel and consequently rarely have anything interesting to say) but this one is worse than most.  The director pretty much narrates the on screen action, which didn't add to my enjoyment or understanding of the show.

There's also a 16-page production art gallery, a clean opening and ending, and trailers to other Viz anime series.

It's hard to watch this show and not put yourself into Light's shoes.  What would you do if you could kill anyone in the world by only writing down their name while picturing their face?  Light comes up with an interesting plan, and though its clear that he's gone mad with power, the world he envisions just might be a better place to live.  Wonderfully engaging and stimulating too, this is one of those shows that you'll want to tell all your friends about.  Highly Recommended.