Littles - The Complete Unedited Series, The 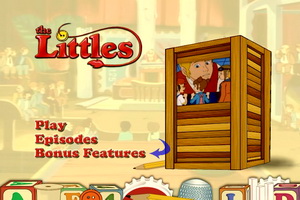 Believe it or not, back in the day (otherwise known as the 80's), there was a time when the major networks treated Saturday morning cartoons the way their primetime lineups are treated today. They would advertise like crazy - particularly in Marvel and DC comic books - in addition to having "preview" shows in primetime to hook the kiddies into waking up early on a day where it wasn't necessary. Sure, there might have been some shows not deserving of my warm 'n fuzzy nostalgic feelings (Turbo Teen, i'm looking at you), but they're justified for the most part. When I selected the Littles - the Complete Unedited Series, I was was hoping that it would live up to the fond feelings that make me select it in the first place. Thankfully, it did.

Originally premiering on ABC in the fall of 1983, the Littles was based on a series of books by the late John Peterson. As the show begins, we're introduced to the Littles - siblings Tom and Lucy, their cousin Dinky and Grandpa Little (with occasional appearance by Tom and Lucy's parents, Frank and Helen). We also meet Henry Bigg and his pet turtle, Slick, who are the Littles friends and allies and the only two that know they exist. Since it wouldn't be a show without some sort of conflict, the show introduces a nemesis in the form of Dr. Hunter (seemingly based on Peter Coyote's character in E.T. - the Extra-Terrestrial). However, the fact that he's routinely outwitted by a child and a bunch of people barely ten inches tall, doesn't really say anything about his level of menace or competency - then again, this is a show for children and the fact that I didn't think twice about it when I watched it as a kid, illustrates that fact.

There are also some slight differences between the book and the show - in the book, there are more members of the Little family, while Dr. Hunter and his assistant, Peterson, make their debut on the show. For almost two seasons, the plots for most of the episodes were pretty strong. If the Littles themselves weren't getting into trouble, they were always bailing some bumbling human out of it and there was always a lesson to be learned. Perhaps this could be attributed to the fact that Jeffrey Scott was the sole writer for practically the entire first season (there's no credit for the episode "A Little Gold, A Lot Of Trouble". Mr. Scott sticks around for the first episode of season two, but departs, leaving the show in the hands of a variety of writers, with Jack Olesker and Marc Scott Zicree handling more than half of the remaining episodes of the series. Towards the end of season two and for most of season three, the Littles and Henry inexplicably become "world travelers" (to such places as India, Ireland, Rome and outer space (!)) which, considering the new landscapes they could've explored, was slightly tedious since they almost always discovered a hidden race of Littles. Perhaps the problem was watching more than two episodes at a time? 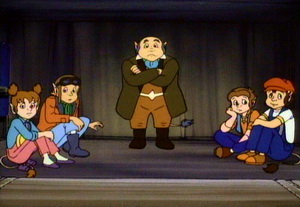 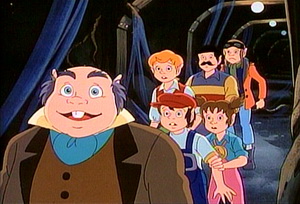 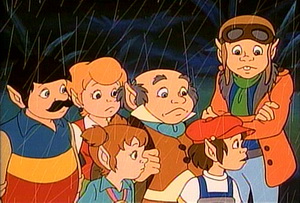 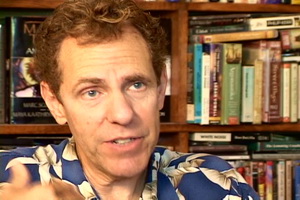 Besides the episode-ending "Little/Big Ideas For Big/Little People" (which turns into "A Little Known Fact" towards the end of the series), there are quite a few bonuses included in this set. Disc one has a "Storyboard To Episode Comparison" featurette [4m30s], as well as a PDF of the complete storyboard, while disc two has one of those static screen "choose-the-right-answer-to-see-a-few-seconds-of-animation" things called "How Would the Littles Use....?" Trivia Game. Yeah, it's as lame as it sounds. However, if you "really know your Littles Trivia", you'll get a "special reward" which shall not be spoiled here. On disc 3 there's a compilation of "Little Ideas For Big People" shorts that teaches viewers how to make their very own Little items and vehicles out of ordinary household items, including a raft, a parachute, a telephone, a turtle, a badge, a hot air balloon, a dump truck or a glass car. It lasts roughly four minutes total. We also find a 22 minute interview with Marc Scott Zicree on disc three, where he talks about his fond memories of working on the show, his favorite characters and working on the first Littles film, "Liberty And the Littles". Speaking of "Liberty And the Littles", that hour-long movie can be found as a bonus on disc 4. Written by Marc Scott Zicree, "Liberty And the Littles" has the Littles stumbling upon a city of French Littles living inside the Statue Of Liberty. Along the way, the Littles help teach their new friends the meaning of the idea of freedom. Guess Lady Liberty wasn't the only gift from the French, oui? Frankly, while the audio quality was consistent with the rest of the set, the video quality left something to be desired. Based on the opening intro, it looks (and sounds) as if it was authored from a VHS copy. Additionally, there's a 14 second clip of "Show Bumpers" as well as a PDF of the show's "Bible". The fifth and final disc is probably the weakest as far as extras are concerned. It has merely a 45s "Visual History Of the DIC logo", which is exactly what it sounds like...a collage of animated DIC logos and a PDF of the Pilot episode outline for your DVD-ROM.

Video: The 29 episodes that comprise the Littles - the Complete Series are spread across five single-sided DVDs. They're presented in a full-frame 1.33:1 ratio and the picture quality is somewhat close to that of a VHS-to-DVD transfer. In addition, the picture is soft and has occasional dirt and grain (a terrible amount can be found on season two's episode the Littles' Halloween). The colors aren't that bright, most of the times they were washed out (particularly during "For the Birds" or "the Little Scouts" - yellow grass?), and the blacks aren't as deep as one would hope. While I wasn't expecting a thorough digital picture restoration, I would've appreciated the appearance of some sort of care shown to the picture quality.

Audio: Anything more than the Dolby Digital 2.0 would probably have highlighted the flaws on this track. As it is, the 2.0 is adequate and quite clear. However, it was nothing special. 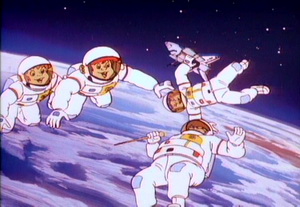 My son's kindergarten teacher has a credo: "You get what you get, and you don't get upset". I suppose one could nitpick about the little things that aren't right with this set - the fluctuating colors, the fact that there are no interviews with Jeffrey Scott or Jack Olesker (particularly Mr. Scott, who wrote the bulk of the episodes) or that one would have to buy the other Littles film, "Here Comes the Littles", separately to have a true complete series (despite the fact that this "prequel" contradicts the original opening credits regarding how Henry stumbled across the Littles). Still, it should (& would) bug those of us that are completists. However, I refer you again to my son's teacher's credo. Just the fact that the Littles are on DVD should be appreciated. The fact that every episode that aired, as well as their film "Liberty And the Littles" was included, is enough to make this a Recommended set for fans. I enjoyed it when I was young, and I enjoyed it again with my kids twenty three years later.